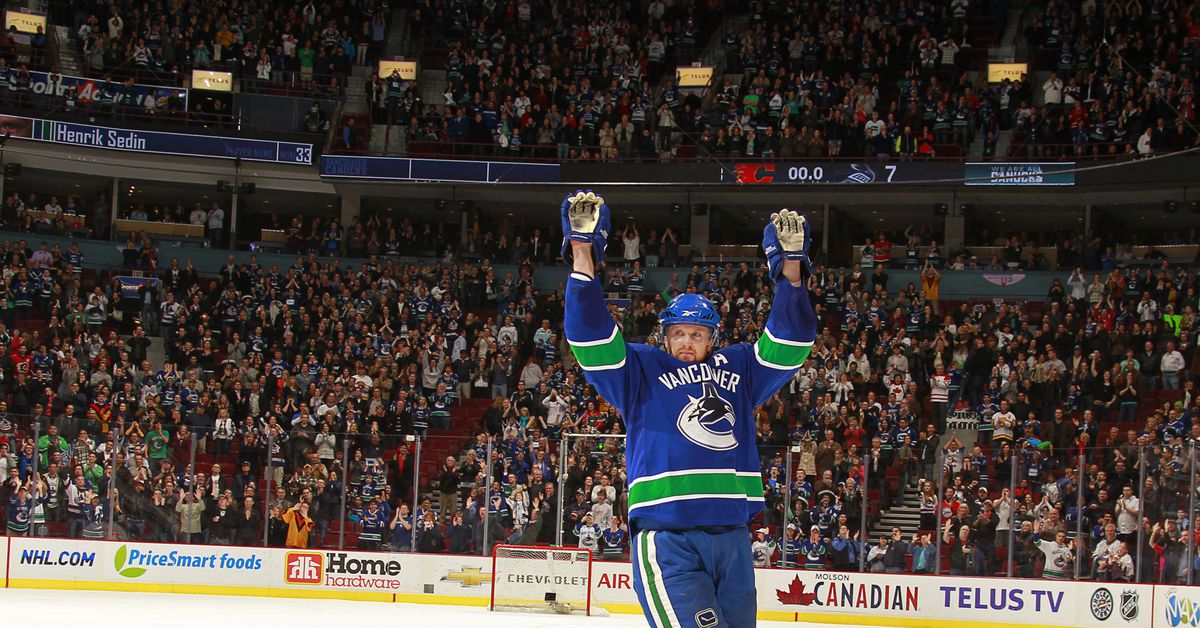 For five of those years, between 2008 and 2013, they were at their absolute peak. They led the Canucks to the second-best record in the NHL over those five seasons, one point back of the rival Chicago Blackhawks.

However, it was the two seasons between 2009 and 2011 where they were not just at their best as professional hockey players, but they were the two best hockey players on earth.

Here are Nucks Misconduct, we like to reminisce on the good times. The Sedins offered those moments aplenty, but this post will look back on some of the best moments during their two-year chase for back-to-back Art Ross Trophies.

By the fourth game of the season, Henrik already looked like he was on a different level. The Canucks had just lost three straight games to start the season, and the Montreal Canadiens were in town. Number 33 would lead his team to a 7-1 victory that night, with his first four-point night since February, 2007.

I mean, how about Henrik with that Burrows leg kick?

One of the reasons why the future captain made a name for himself in 2009-10 was because of his success without Daniel.

The first great example of this was on November 14th, 2009. While playing on a line with Ryan Kesler and Mason Raymond, Henrik recorded his first, and only, career hat trick against the Colorado Avalanche.

Daniel ended up missing almost a month and a half before returning in late-November. Henrik only continued to pile up the points with Daniel in the line-up.

He even had a stretch in December where he recorded at least two assists in six straight games. By Christmas time, he was third in league scoring with 47 points in 37 games, ahead of Alex Ovechkin and Sidney Crosby. He only trailed Marion Gaborik and fellow sauce-master, Joe Thornton.

A late January game pitted the Canucks against their budding rivals, the Chicago Blackhawks. By this point, the two teams had already played each other in the Stanley Cup playoffs once, and they even had a line brawl in the previous season as well.

It was games like this where Henrik and Daniel brought their best. On this night, Henrik had a goal and two assists, capped off by this sexy pass to Daniel.

By the time the Olympic break rolled around, Henrik had climbed up to second in the Art Ross race. However, he was nine points behind Ovechkin, who had played seven fewer games than Henrik at that point in the season. It looks like the Art Ross was likely out of reach.

Of course, it wasn’t.

Over the final 20 games of the season, Henrik only went pointless on three occasions, registering 28 points in 19 games. It gave him 108 total on the eve of the regular season. He trailed Ovechkin by one point heading into battle against the Calgary Flames.

The Canucks were the better team out of the game. Rick Rypien scored the opening tally, before Kevin Bieksa scored the 2-0 goal, which was assisted by the twins.

Then, Henrik really got to work.

Then there was another two on one, capped off by Daniel.

And of course, one of the most memorable plays ever by a Sedin.

Henrik had four assists on the final night of the season, and his 112 points total points allowed him to become the first Canuck to ever win the Art Ross.

“It was only three or four years ago that we weren’t good enough third liners, so it’s been a fun journey,” Henrik Sedin told The Globe and Mail. “There were a couple of tough years, but the last four years, we’ve enjoyed coming to the rink every day. It’s the best thing you can do, to play in a Canadian market like this.

“You can’t really ask for anything better.”

Although Henrik won the Hart and Art Ross Trophy in 2010, Daniel Sedin’s tremendous season that got somewhat overshadowed. Despite missing 19 games, the younger twin finished with a career-best 85 points in just 63 games. His 1.35 points per game trailed only Henrik and Ovechkin.

The Sedins might have hit the dreaded age of 30 prior to the 2010-11 season, but they weren’t anywhere close to slowing down.

Daniel came out of the gate roaring to begin the new season. He registered seven goals in the first seven games, including one of his 86 career game-winning goals.

By the way, Markus Naslund is a distant second on the franchise leaderboard with 49 game-winners.

Throughout the season, the twins were the definition of consistent. They constantly found their way onto the scoresheet. Even though Daniel had 41 goals that season, it wasn’t always the tallies that got him on highlight reels.

Just look at the patience on this set up to Alex Burrows.

Watching them dummy the Oilers time and time again never got old.

At Christmas time, both Henrik and Daniel were tied for 4th in the NHL with 43 points, but they were both a long ways behind Sidney Crosby, who had 60 by Christmas. However, Crosby only hit 66 points before a cheap head shot from David Steckel of the Washington Capitals knocked him out for the rest of the season.

Crosby and Ovechkin are clearly generational talents, and two of the best players to ever play the game. However, Henrik and Daniel were arguably (and I don’t know if there’s much of an argument), the two best players in the game otherwise during their peak.

Daniel and Henrik kept rolling, along with that whole Canucks squad, through the 2010-11 season. In late February though, Daniel had his longest drought of the season, going three games without a point.

At that point, he had 79 points to narrowly lead the Art Ross race over Steven Stamkos (78 points), Martin St. Louis (75 points), and brother Henrik, who had 74 points.

It was the last bit of Art Ross drama, as Daniel went on a tear after that. Following his “drought,” he had nine goals and 21 points over his next 13 games.

Over that stretch, all the Canucks did was win. They had 12 wins and one loss, during Daniels’s steak. Number 22 was up to 41 goals and 100 points by the end of March. By then, the Canucks locked up the Presidents Trophy as well.

Unlike Henrik’s year with the Art Ross, there was no drama with Daniel by the end of it. He was eight points up on second place Martin St. Louis heading into April, and he ended up winning the Art Ross by five points.

While there are a barrage of reasons why Daniel should have won the Hart Trophy over Corey Perry that year, he was at least given the Lester B. Pearson award by the players. It capped off one of the most dominant and unique stretches of hockey by two players on the same team ever.

Daniel might argue, in fact, that he was still the better player. Since he missed time in 2009-10 due to injury, he ranks fourth with 189 points over those two seasons. However, his 1.3 points-per-game mark is better than Henrik’s 1.26. Only Sidney Crosby’s 1.43 points-per-game was better during that time span.

The magical and ultimately remorseful playoff run came next, with many more moments of Sedinery. Regardless, those two years between 2009 and 2011 will go down as two of the most dominant by any Canucks player in history.

And they just happened to be twins.

Thine Be the Glory – The Center For Church Music, Songs and Hymns