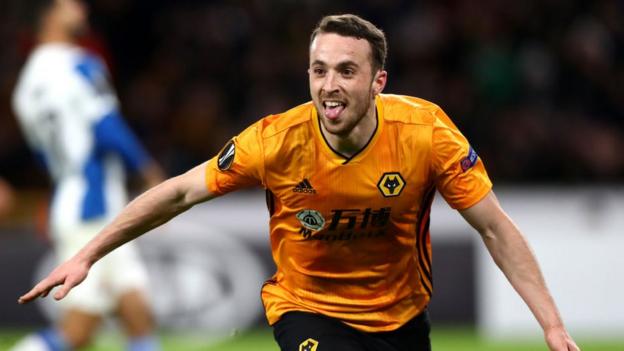 Wolves boss Nuno Espirito Santo accepts the club’s fans may start to dream of Europa League glory after his team took a huge step towards reaching the last 16 by thrashing Espanyol.

Diogo Jota scored a hat-trick for the second consecutive game in the competition and Ruben Neves hit a stunning long-range volley as they dominated the first leg of their last-32 tie at Molineux.

It was another impressive result in the competition for Wolves, who have not looked out of place in Europe despite an absence of 40 years.

Asked whether he felt the club’s fans are right to believe they could win the tournament, Nuno said: “They know me, now we have to recover, rest because we play on Sunday.

“After that we can think about other things but dreaming is for free.”

Wolves are fifth favourites with bookmakers to win the Europa League, with Antonio Conte’s Inter Milan tipped to lift the trophy this season.

However, English sides have been in good form in the competition in recent years. Last year’s final was an all-English one contested between Chelsea and Arsenal, while a side from the Premier League has reached the final in three of the past four seasons.

However, Nuno is adamant Wolves cannot take progress to the last 16 for granted, despite their 4-0 lead.

“The tie is not over,” he added. “Football is never over.

“We competed well, the result is the consequences of what we did. We were clinical and that’s what we want.

“It’s another clean sheet, defensively we did really well and everything starts from there.”

Given Wolves’ recent inability to start games strongly, this proved an unusually stress-free match for them.

In fact, Jota’s opening goal after 15 minutes – his effort deflecting in off Victor Sanchez following a corner – was something of a collector’s item as it was the first time Nuno’s side have scored first in a match since the 4-0 defeat of Besiktas on 12 December, 13 games ago.

The other similarity with that game and this was Jota’s devastating finishing, scoring hat-tricks on both occasions.

The 23-year-old Portuguese is the first player in eight years (since Klaas-Jan Huntelaar for Schalke in 2012) to register back-to-back hat-tricks in this competition, and he has now been directly involved in 14 goals in 11 European games this season.

“I’m happy for him, delighted because when a player scores three goals it means he has helped a lot,” Nuno added.

“He did a good job, not only offensively but covering and was always organised. Neves also scored a beautiful goal.”

Only once did Wolves look like surrendering the initiative, in rather comical fashion as striker Raul Jimenez miscued what was intended to be a hefty punt downfield.

Instead, the Mexican sent the ball looping from quite a height into his own six-yard box. Keeper Rui Patricio completely messed up two attempts to clear and was fortunate to have recovered his position by the time Facundo Ferreyra scuffed his shot and was able to keep it out.

It was a rare moment of panic on a memorable night for Wolves and the result means they have scored four goals without reply in Europe four times this season.

Wolves could win it

Wolves’ European heritage is rich, if not particularly extensive – or recent.

This is Wolves’ eighth European campaign but their first since 1980-81. It was the first time they had still been involved after Christmas since 1972, when they were beaten in the Uefa Cup final by Tottenham.

Having started in the second qualifying round against Northern Ireland side Crusaders on 25 July, they have now played 13 fixtures and while the final in Gdansk on 27 May is a further seven matches away, Nuno’s well-drilled outfit are not without hope of lifting the trophy, especially if the increasingly influential Adama Traore stays fit.

At Aston Villa and Middlesbrough, Traore appeared to have little going for him other than staggering pace.

Over the past 12 months, the Spaniard has developed his game awareness to a significantly higher degree.

Every time he took possession, a buzz of anticipation went round the stadium. He won the corner which led to Jota’s opener and it was his cross which helped tee up Neves for his stunning volley.

And while Jota will take the headlines for the quantity of his goals, it was the quality of Neves’s strike – chesting the ball down and smashing it into the corner – which provided the real highlight of the night.

The only sour moment came just before half-time when a routine push and shove between Jota and Ander Iturraspe escalated after the former Spain midfielder appeared to make a forward movement towards the Wolves man as he stuck his forehead into him.

German referee Tobias Stieler quickly whisked out a yellow card to the incredulity of the home supporters, who felt it was a certain red.

In the end, it mattered little and Wolves have now won 10 out of their past 11 home games in European competition, a run that stretches back to 1973.

They may have a few more games at Molineux to play yet.

In a run stretching back to October 1973, Wolves have won 10 of their last 11 home games in all European competition, winning to nil in each of their last three.

Man of the match – Ruben Neves

Twelve of Neves’ 15 goals for Wolves have been scored from outside the box. The other three were penalties

Wolves’ next game is at home to the Premier League’s bottom club, Norwich, on Sunday, 23 February (14:00 GMT).

Packhorse Bridge in Prestolee restored to to former glory