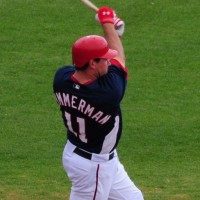 In Part One of the season preview, we focused on the Nationals pitching staff, broke down their prospects for the coming season, and remarked on the now suspicious injury history of Carl Pavano (okay, we didn’t, but it certainly does deserve the people’s eyebrow).  Today, we turn our punditry towards the Nationals lineup and bench, and then will make overly generic predictions for the season that in 400 years’ time, will also be seen to contain clues about the end of time.

SS Ian Desmond – I probably should check with the judge to see if I’m allowed to write anything about Ian after drafting him last year in fantasy baseball, but it goes without saying that Desmond is hardly the ideal lead-off man.  He does possess a little pop and can steal 20 bags in a season, but whiffs way too much, doesn’t take a walk, and thus, doesn’t find his way to first and beyond too often (career .304 on-base percentage).  I hate to say this, but if Desmond and Espinosa hit most or all of the season at the top of the lineup, the hopes for a good Nationals offense goes out the window.

2nd Danny Espinosa – Well, I drafted you this year, which probably means we won’t be speaking by mid-May.  You are talented enough to make many things possible.  You have some real thunder in your bat, and a 20-20 season wouldn’t surprise me in the least.  But you strike out by the bushel, so a batting average above .250 may be asking too much.

3rd Ryan Zimmerman – I fear he won’t age well, but for now, Zimm is the Nat’s franchise player.  He is capable of a .300/30/100 (the latter of which he will probably will be denied because of the lack of base runners) season, all the while bringing gold glove defense to the hot corner every day.  I think Baseball Prospectus may have been stretching it just a bit when it said to look to Zimm for a dark horse MVP candidate, but not by that much.

RF Jayson Werth – The good thing is that Werth probably can’t play much worse than last year.  I suspect he is due for a decent rebound.  Then again, I didn’t think Dana Stubblefield could make a sumo wrestler jealous and he did.  That’s life as a Washington sports fan.  I actually think it would be best if manager Davey Johnson moved Werth and his career .360 on-base percentage up to the #2 hole, which would work the opponent’s pitchers a bit more and increase the odds that Zimm hits with someone on base.  That still wouldn’t solve lead-off, but you have to start somewhere.

LF Michael Morse – The breakout slugger from last season hasn’t done much of anything this Spring, hampered by a right lat strain that has lingered to the point of landing him on the 15-day DL to start the season.  I think he got a touch lucky with his batting average last year, but the power is legit.  Hopefully, his body holds up because it is bat that makes his butchery in the outfield (-7.9 UZR in 2011) tolerable.

1B Adam LaRoche – Oy.  I’m not sure I like the addition of last year’s season-ending shoulder surgery to an already slow and elongated swing susceptible to long periods of wind-only production.  Oh, and his shoulder has hurt him throwing during Spring Training.  Hopefully, he hasn’t lost his ability to pick it at first, because that may be the only thing keeping him from the scrap heap.

C Wilson Ramos – Wilson’s emergence last year probably contributed to the Nationals willingness to give up Derek Norris as part of the Gio Gonzalez trade.  Can’t say I disagree with at least that part of the trade, because a prospect is only good to you playing in the big leagues or as trade bait.  And with Ramos in DC, the former wasn’t going to happen.  Ramos has a nice bat capable of a solid average (think .270ish) and good power for a catcher (think optimistically 18 home runs or so), all the while playing solid defense.  He’s the Ron Popeil of catchers.  Set him and forget him.

CF Rick Ankiel/Roger Bernandina – Bleh.  Honestly, it won’t be until Bryce Harper is promoted from Triple A that the Nationals will have the hope of fielding a legitimate center fielder.  And of course, Harper offers more than just legitimacy beyond 2012 – true star potential.  Until then, the combination of Ankiel (who will start the season on the 15 day DL with a tight left quad) and Bernandina will offer up only average defense and below average hitting.  Bleh.

Having a deep and flexible bench is always a critical ingredient to a playoff-caliber team, and with a couple of injuries to start the season, it won’t take too terribly long to figure out how good the Nationals bench will be.  Right now, it looks like Washington will initially carry backup catcher Jesus Flores, infielders Chad Tracy and Steve Lombardozzi, outfielder Brett Carroll, and jacks of all trades, Xavier Nady and Mark DeRosa, the latter who should see most of the starts in place of the injured Morse.  At first blush, Washington appears to have a flexible but not necessarily overly talented bench.  Finding a decent left-handed bat (Tracy isn’t it) and keeping DeRosa healthy should be the Nats top bench priorities.

The end is nigh!  Oh, right, about the upcoming season.  As it stands now, the NL East, while seemingly stacked, also has its vulnerabilities.  The Phillies lineup is banged up and will actually be fairly pedestrian when it is all said and done.  The Braves didn’t do much to improve a middling lineup and will rely too much on young starters that will end up taxing their good, but overworked bullpen.  And the Marlins* rotation and bullpen beyond Heath Bell have a lot of question marks.  So, do all these weaknesses crack open the door to a Nationals playoff appearance?

My heart says yes but my mind still can’t get all the way there.  Stupid brain keeps asking questions like who in the heck is going to be on base when Zimm comes up to bat?  Will the holes in the Nationals defense (Morse, Desmond, CF) cost them one too many wins?  And the answers, to the extent they exist, are not satisfying enough to make me believe the Nationals will get all the way there.  They will get close.  Oh so close.  But they will fall just short – 87 W, 75 L, 3rd place in the NL East.

*The Bernie Madoff Mets have Mike Pelfrey in their rotation.  Your kid sister could hit .250 against him.  They aren’t competing for a playoff spot.

Alan Shearer Coaching Newcastle United: A Story Of What Might Have Been