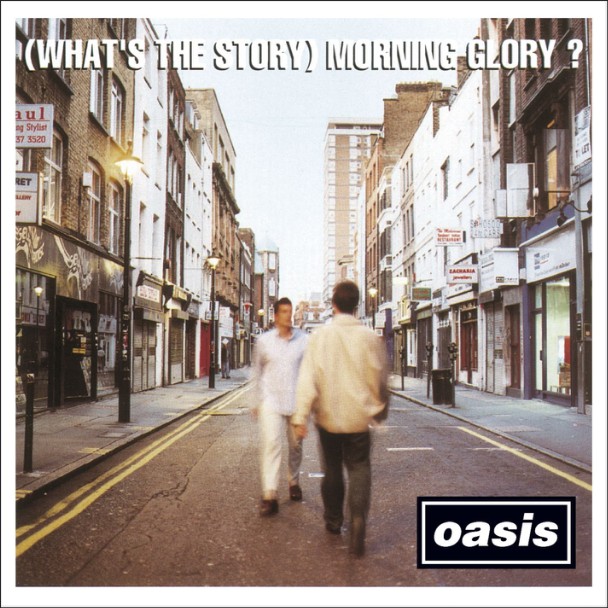 Last month, we marked the 20th anniversary of Blur’s The Great Escape: the complicated conclusion to that band’s Britpop trilogy; an album that lives on as a sprawling and flawed but fascinating and mostly great work. Just under a month later, Oasis offered a rejoinder: their sophomore release, (What’s The Story) Morning Glory?, which turns 20 this weekend. At this point in their respective careers, the stories of Oasis and Blur were inextricably intertwined. This was when the bands were enmeshed in a media-fueled and (partially) media-created rivalry. Ahead of the release of each of their 1995 works, they engaged in the “Battle Of Britpop,” a pissing match between their promotional singles — “Country House” from Blur vs. “Roll With It” from Oasis — that was as driven by the British media, who coined the title, as it was by Blur’s label, Food Records, deciding to move up the release of “Country House” explicitly to contend with “Roll With It” — or at least so it didn’t get lost in the latter’s wake. (Though in this tale both come off as lead singles, Oasis had actually already scored a #1 single in April of 1995 with Morning Glory track “Some Might Say.”)

As the story goes, Blur won the battle and lost the war. “Country House” sat above “Roll With It” at #1. But while Blur were massive popstars in their home country and The Great Escape garnered critical praise that grew more conflicted in ensuing years, Morning Glory was an album that received mixed reviews at the time but quickly became emblematic of the time. Definitely Maybe had kicked down the door the preceding year, setting a record for the fastest-selling debut ever in the U.K., but Morning Glory launched the band into that superstar stratosphere — not only in England, but here, too.

Most days, I’m inclined to argue that it’s Morning Glory, not Definitely Maybe, that lives on as Oasis’ masterpiece. It has everything that made their debut urgent and vital — the same swagger, the same self-mythologizing in process, the same take-no-prisoners songwriting. Especially here in America, it feels like the Britpop release that was truly as massive as the movement itself in England. “Wonderwall” and “Champagne Supernova” each topped the Modern Rock Tracks charts here; each lives on, for better or for worse, with the kind of in-the-air ubiquity that makes them undying staples at coffee-shop gigs or in dorm hallways.

With that comes a certain over-exposure. When I wrote about Definitely Maybe’s own anniversary last year, I was struck by how fresh it felt revisiting that album two decades on; how young and visceral it felt; how exhilarating the big rock ambition sounded situated within a sound that at times still flirted with the hazy drugginess of Madchester or shoegaze. Morning Glory suffers a little in that regard, if only because of those few over-exposed songs, or because its sound, while still assimilating Oasis’ influences as simultaneously deftly and obviously as they did throughout their career, feels of a piece with a classic-rock sound in a grander scheme than Definitely Maybe. The band’s debut had its fair share of classicist elements, but was thoroughly a British rock album of the ’90s. Morning Glory is one of the British rock albums, period, which makes it Great — but also makes it the kind of album you can get sick of hearing about, and you can wind up taking the music therein for granted as a result.

Sure, Definitely Maybe was raw and immediate, but Morning Glory was something beyond that. The outsize ambition at the core of “Rock ‘N’ Roll Star” had already come to fruition. In 1995, Noel told Rolling Stone that “the first album is about dreaming of being a pop star in a band,” while this was “about actually being a pop star in a band.” So, with that, came a magnanimity that hinted at excess, the kind of wide-reach ing gesture of pop music you could only have the guts to pull once those wild-eyed dreams on Definitely Maybe came true. Once you were already proven right. But amidst that, they were still young, still close enough to the hunger and still in the tempest of rapidly increasing fame. Morning Glory has all the same intense immediacy of Definitely Maybe, but more expansiveness — and with more expansiveness, arguably more longevity. There’s a reason “Wonderwall” and “Champagne Supernova” won’t die; they’re immortal songs.

It goes beyond the calling cards like those songs, though, or the perennial live favorite “Don’t Look Back In Anger.” The opening salvo of “Hello” into “Roll With It” is like when a visionary young director is given their first big budget and manages to wrangle it to only further their own vision. “Some Might Say” cribs the same stock glam tricks as “Cigarettes & Alcohol,” and yeah, whatever, it might be more sentimental than its predecessor, but it has the sound of an older brother, the one who grew up and learned to bottle up his sense of swagger and actually take a stroll through the outside world. “Cast No Shadow” (written for Noel’s friend Richard Ashcroft of the Verve) is one of the more overlooked Oasis gems, insofar as anything off their first two records could be in the ranking for “overlooked Oasis gems.” It’s a beautiful track, orchestrated yet understated, not driving toward the arena-rupturing chorus but content to situate itself in revery — not always a common quality in Oasis’ balladry, and a welcome one. And then there’s “Morning Glory,” a song equal parts foreboding and cathartic, riding on layers of guitar that sound like a hurricane made up of sirens. You can listen to Morning Glory to death, and that song still sounds incredible and inevitable; its current doesn’t let you go, even two decades later.

Here, Noel was wielding the same songwriting fervor, but with an expanded palette — more lush, more intricate, even vulnerable in places (though always vulnerable on a popstar kind of level). Liam’s sneer had already bloomed into a far-more-assured rock howl. He always had a hell of a voice and was always a consummate frontman, but this is probably the moment where he was at his best as an actual rock singer; hard living would level him in a matter of years. The reason people got sick of Oasis is because they always, throughout the band’s existence, acted like they were unstoppable, well after these heady days. The thing about Morning Glory is it’s one of those singular albums that does capture a band, in all their moods and permutations, at the exact moment where they were unstoppable.

But as I wrote when we did Britpop Week in April 2014: 1995 may have marked Britpop’s frantic explosion and the skyrocketing success and fame of its principal artists, but it also signaled the beginning of the end. This is truest in the case of Oasis. Everything Oasis did from here on out was in relation to Morning Glory, whether that meant them becoming bound to certain forms and sounds, or whether that meant everyone judging each album that followed as a failure after the inhuman achievements of the band’s first two years. Oasis never stopped being rockstars, but the fever dissipated by the end of the ’90s; and if you mark that by albums, it dissipated very soon after Morning Glory, turning into overblown indulgence (Be Here Now) at first and then, against most odds, a workmanlike commitment in the band’s underrated ’00s output (Don’t Believe The Truth and Dig Out Your Soul). If Definitely Maybe was about chasing the dream and the myth, and Morning Glory was the overwhelming rush when you realize well, shit, it’s real, everything that came afterward was fraught with that realization. It got Oasis stuck in musical frameworks that had proven successful for them in the past, ranging from wearing out Beatles-isms to old school rock excessiveness. It got them — hopelessly, hopelessly — lost in their own self-aggrandizement. This makes Morning Glory a specific breed in the canon of rock music: a legendary album that is held up as one of the greats in British music history, a masterpiece from a one-time master songwriter at his peak, and yet also the source of an artist’s own undoing.

Hubble just captured this ‘fluffy’ galaxy in all its flocculent glory