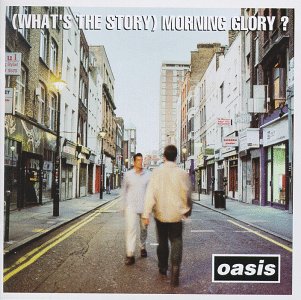 Many new rock bands leave the starting gate with fists flying, eager to batter down obstacles on the road to stardom. But few have been as hands-on as Oasis. In England the band’s popularity has almost as much to do with the number of black eyes and bloody noses that brothers Noel and Liam Gallagher have inflicted on each other as it does with the number of hit singles they’ve created. Ironically, this stormy relationship is also what makes their new album, (What’s the Story) Morning Glory?, so galvanic.

It’s no secret that tension and instability have been inherent traits of great rock teams, going as far back as Jagger and Richards, but for Oasis, the addition of shared genes gives their songs extra impact and dimension. No matter how much the Gallaghers fight — or pose — their brotherly bond holds at the center. This inner confidence allows the group to flaunt its jaded arrogance like a five-man biker gang — whether it’s revving on amplifier overload or coasting through a pastel-washed reverie. It also permits. Oasis to borrow shamelessly from artists like the Rolling Stones, T. Rex, the Kinks, Small Faces and, especially, the Beatles without losing their own snide identity.

Oasis’ first album, Definitely Maybe, was rebellious and attitude laden, revealing the decadent dreams of working-class British youths who watched The Kids Are Alright a few too many times. The music mixed Stones swagger with soaring melodies, and titles like “Rock ‘n’ Roll Star,” “Supersonic” and “Live Forever” conveyed the band’s desire to transcend the mundane. But for all the supercilious sneering, the disc — as good as it was — didn’t quite live up to the hype.

(What’s the Story) Morning Glory? is more than a natural progression; it’s a bold leap forward that displays significant musical and personal growth, not to mention a far greater familiarity with the Fab Four’s back catalog. Since pledging themselves to “Cigarettes and Alcohol” on their debut, Oasis have apparently had plenty of sex, done loads of drugs and lived rock & roll to the limit, and now they’re searching for something more. Twenty-seven-year-old songwriter Noel Gallagher has crafted a number of tunes that downplay bravado in favor of self-discovery and even (gulp) sensitivity.

While Noel once filled melodies with sharp, bristling guitars and crisp, cracking beats, these days he’s relying on gentle, reflective rhythms. And instead of merely crowing in a nasal tone that sounds like a cross between John Lennon and John Lydon, brother Liam sings with warmth and occasionally hints at vulnerability. “Wonderwall” (this year’s “Live Forever”) is a pensive, jangly tune that expresses Noel’s disorientation at sudden stardom. “Don’t Look Back In Anger” and “Cast No Shadow” flow with weepy strings, muted drumming and equally memorable choruses. Featuring a piano passage that echoes Lennon’s “Imagine,” “Anger” addresses the star’s inability to sustain a relationship on the road, while “Shadow” expresses the pain of an artist in a consumer society.

Yeah, Oasis have discovered their feminine side on (What’s the Story) Morning Glory?, but that doesn’t mean they can’t still rock. “Hello” is bent and stretched by wiggy wah-wah guitars and a shuffling beat, ending with a Gary Glitter chorus lifted verbatim from the original. The title cut starts with helicopters and static, then bursts into an invigorating riff that circles endlessly over wailing guitar echoes and hedonistic lyrics. There’s the obligatory T. Rex ode “Some Might Say” and the whimsical “She’s Electric,” which ends with a passage nicked straight from “With a Little Help From My Friends.”

Rather than hide from their influences, Oasis irreverently revel in them, even to the point of shoving a few in their critics’ faces. Two tracks are followed by brief, dark, druggy instrumental interludes reminiscent of the end of “Strawberry Fields Forever”; “Wonderwall” borrows its title from a George Harrison solo album; and “Morning Glory” cheekily drops a Beatles song title in the line, “Tomorrow never knows what it doesn’t know too soon.”

Yesterday, Noel Gallagher’s troubles may have seemed so far away, but today Oasis are grappling with success and fear in a way that gives their glorious pop new potency. If Oasis can avoid falling prey to the kind of brotherly shove that eventually destroyed the Kinks artistically, the future looks bright indeed.

John Introduces the Story of the Revelation of the Glory of God (1:1-18) – The IVP New Testament Commentary Series

Morgan Wallen Banned From CMA Awards, Still Nominated For Album Of The Year