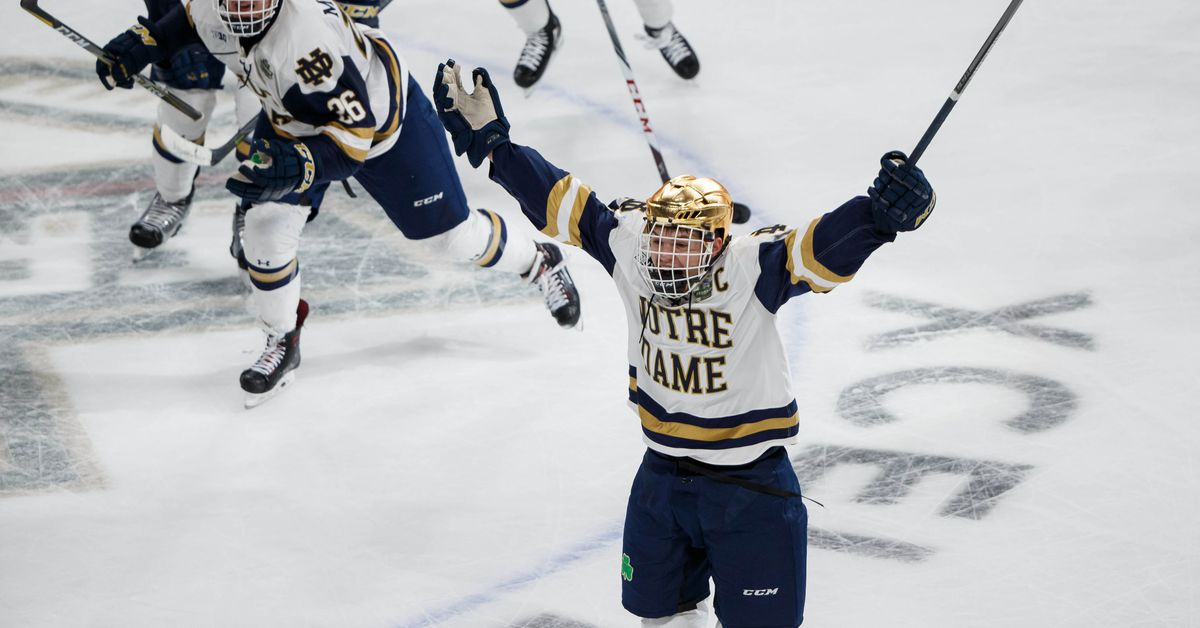 The ‘17-18 hockey team faced a bit of uncertainty as the season began, coming off an appearance in the Frozen Four the year before, but losing leading scorer Anders Bjork and starting goaltender Cal Petersen to professional hockey, as well as entering their first season playing in the Big Ten.

The Irish started the season slowly, falling to 4-3-1 with a loss to the Nebraska-Omaha Mavericks on October 26. They won the next day though and started a record breaking run. They didn’t lose again until January 21, a total of 87 days. When it was all done, the Irish had won 16 straight games and went undefeated for the entire months of November and December.

That winning streak helped power Notre Dame to the Big Ten regular season title in their first season in the conference. It was in tournament play, however, when this team truly became memorable.

In their first game in the Big Ten tournament, Notre Dame faced off against the Penn State Nittany Lions in the semifinals. The game was tied at 2 late in the third period before Jack Jenkins scored with about 30 seconds left to give Notre Dame the lead and the win. The last second heroics would become a trend for the team that soon became dubbed the Cardiac Kids.

Notre Dame was next in action in the Big Ten tournament final against the Ohio State Buckeyes on St. Patrick’s Day. This time Notre Dame took an early 2-0 lead before the Buckeyes came back to tie it in the third period. The game went into overtime tied at 2 before Notre Dame worked their magic again. The hero this time was Cam Morrison, who found himself wide open for a pass in the neutral zone before carrying the puck across the blue line and firing a wrist shot that won the game for Notre Dame and handed them the Big Ten tournament title in their first year in the conference.

The Irish continued their heroic trend in the regionals of the NCAA tournament. In their first game against the Michigan Tech Huskies they won 4-3, again in overtime after allowing the tying goal with under two minutes left in the game. In the regional final they played the Providence Friars. They won that game 2-1, the game winning goal scored by Dylan Malmquist

with just 30 seconds left, clinching a place in the Frozen Four.

In the national semifinals Notre Dame met the Michigan Wolverines and it was another hard fought game between the two rivals. Michigan jumped out to an early lead before Notre Dame rallied, scoring 3 straight goals and taking the lead. Michigan tied the game with about 5 minutes left, but Notre Dame wasn’t done yet. As the final minute ticked off the clock, Jake Evans carried the puck out of the defensive zone before passing to Cam Morrison. Morrison carried it to the goal line while fighting off a Wolverine defender before centering a pass back to Evans in front of the net. Evans redirected the puck between the legs of the Michigan goaltender for the winning goal, the puck crossing the goal line with just 3.7 seconds left in the game. Notre Dame was on their way to the National Championship.

Unfortunately, as you know because this series is titled ‘Unclaimed Glory’, the National Championship didn’t go Notre Dame’s way. They lost to the Minnesota-Duluth Bulldogs 2-1, the first of the Bulldogs’ back-to-back National Championships. The final 30 minutes of the game went scoreless as the Irish pressed but just couldn’t find that tying goal. The magic ran out one game too soon.

When it was all said and done though, 2017-18 was possibly the best year in the program’s history. Jeff Jackson won the Spencer Penrose Award as the best coach in Division 1 NCAA men’s ice hockey and Cale Morris was awarded the Mike Richter Award as the most outstanding goaltender as well as winning the Big Ten player of the year, goaltender of the year, and tournament most outstanding player awards. Morris was named NCAA first team All-American and Jordan Gross and captain Jake Evans joined him as first team All Big Ten honorees.

Notre Dame finished the season with a record of 28-10-2 and ranked second in the country behind the Bulldogs. They spent six weeks in the top spot in the rankings, won the Big Ten regular season and tournament titles, and put together a 16 game winning streak that stretched over four months. In their first five games of postseason play they won all five, two in overtime and the other three scoring the game winning goal with under a minute remaining in the game. The talent on the 2017-18 Notre Dame hockey team was undeniable, but that run of heroics in elimination games ensures them a spot on the list of greatest teams to not win a championship.