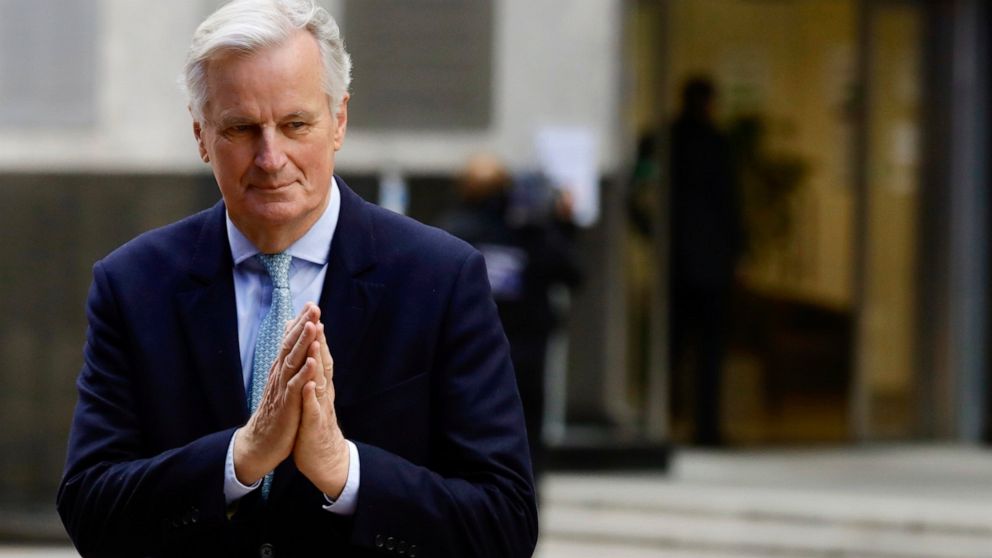 LONDON —
Britain and the European Union set out clashing opening gambits Monday on striking a post-Brexit trade deal, making it clear that each side is willing to walk away without an agreement rather than compromise on key issues.

U.K. Prime Minister Boris Johnson sent a bravado-filled salvo toward Brussels three days after Britain left the bloc, the first country to exit. In a speech to business leaders and international diplomats in London, Johnson said “we want a free trade agreement” — but not at any cost.

“I see no need to bind ourselves to an agreement with the EU,” he said, insisting that Britain would “restore full sovereign control” over its borders, rules and economy.

EU chief negotiator Michel Barnier was equally emphatic that the EU’s 27 remaining nations wouldn’t agree to any British trade deal just to avoid a costly, chaotic “no-deal” at the start of 2021, when an 11-month post-Brexit transition period ends.

“We are in favor of free trade, but we are not going to be naive,” Barnier said. “If the request is to have broad access to a market of 450 million European consumers, zero tariffs, zero quotas — that won’t happen for nothing, or in any kind of condition.”

In their divorce agreement, Britain and the EU agreed to strike an “ambitious, broad, deep and flexible partnership,” including a free trade deal and agreements for security and other areas. The details are to be worked out during a transition period lasting until the end of 2020, in which relations stay essentially unchanged. For the rest of this year the U.K. will continue to follow EU rules, although it will no longer have a say in EU decision-making.

After that, a cliff-edge looms. But Johnson insisted the choice facing Britain was not “deal or no deal.”

“The question is whether we agree a trading relationship with the EU comparable to Canada’s – or more like Australia’s,” Johnson said.

Australia does not have a free-trade deal with the EU, and Australia-style trade would mean a panoply of new tariffs and other barriers between the U.K. and the EU, its near neighbor and biggest trading partner.

Britain is aiming for a “Canada-style” free trade agreement with the EU, which would eliminate almost all tariffs and cover both goods and services. But it is adamant it won’t agree to follow the EU’s entire rule book in return for unfettered trade because it wants to be free to diverge in order to strike other new deals around the world.

The bloc insists there can be no trade deal unless Britain agrees to a “level playing field” and doesn’t undercut EU regulations, especially when it comes to the environment, workers’ rights and health and safety standards.

“There is no such thing like a free ride to the (EU’s) single market,” EU Commission President Ursula von der Leyen said. “It is always rights and obligations in a good balance.”

Johnson, however, doubled down on Britain’s tough stance in Monday’s speech. He delivered it in the Painted Hall at the Old Royal Naval College in Greenwich on the River Thames, a spot steeped in Britain’s past military glories. The vast hall, covered in paintings glorifying British achievement, is where Adm. Horatio Nelson lay in state after his death at the Battle of Trafalgar against the navies of France and Spain in 1805.

Even as he set out a vision of trade that would impose new barriers between Britain and the EU, Johnson said the U.K. would become a champion of free trade in a world where “the protectionists are gaining ground.”

workplace and environmental protections in order to gain a competitive edge.

“The U.K. will maintain the highest standards in these areas — better, in many respects, than those of the EU — without the compulsion of a treaty,” Johnson said.

Johnson’s bullish message was aimed as much at a domestic audience as it was at the bloc, but EU leaders are unlikely to be reassured by what they’ll see as British intransigence and wishful thinking.

“The U.K. can independently decide not to respect the rules,” said France’s Europe Minister Amelie de Montchalin before pointedly adding: “But when it passes the frontier, it concerns the place where it arrives.”

She said the EU would be as vigilant about checking the product itself as about the way it is produced, making sure it would respect social, environmental and other standards that are cornerstones of EU policy.

“It is important for European citizens to know that the single market will be protected,” she said.

Barnier signaled that one flashpoint in the talks will be fishing. He said the EU would link access to its market for British products directly to the access that EU boats are given to U.K. waters.

“That agreement on fisheries will be inextricably linked to the trade agreement,” he said.

Formal trade talks won’t start until next month, once they have been approved by all 27 EU nations.

EU leaders have repeatedly warned that the timetable is tight to strike any kind of deal. Free-trade agreements typically take years. The EU-Canada deal that the British government cited as a model took seven years to negotiate.

If there is no deal by the end of 2020, and the U.K. refuses to extend the negotiating period, Britain faces an abrupt, disruptive economic break from the bloc — with tariffs and other obstacles to trade imposed immediately between the U.K. and the EU.

That prospect alarms many businesses, especially in sectors such as the auto industry, which depend on the easy flow of parts across borders.

The devil will be in the details, and Britain’s position as outlined i n a government document is less set in stone than Johnson’s speech suggested. It said Britain would negotiate with the EU “on access to waters and fishing opportunities,” and also spoke of possible “regulatory and supervisory cooperation“ in financial services, a key area for the British economy.

However, Barnier said the EU would continue to prepare for no deal.

“If we cannot manage by the end of the year, there will be a widespread cliff,” he said.

Johnson, however, brushed off the idea of a “no-deal” Brexit — though that is essentially what Australian-style trade means.

One word was noticeably missing from his wide-ranging speech: “Brexit.” Asked whether he had banned the term, he said: “It’s not banned. It’s just over.”

Jill Rutter of political think-tank U.K. in a Changing Europe said there was a gap in both style and substance between the two sides.

“The U.K. PM has chosen a speech in a historic setting to lay down red lines, embellished with rhetorical flourishes, while the EU has laid out 167 paragraphs of negotiating demands in a functional conference room in Brussels,” she said.

“We have to hope that, behind the Johnson oratory, U.K. ministers have agreed their own parallel version of the EU text.”

On This Day in Football History

Once upon a time in Counter-Strike « readmore.de