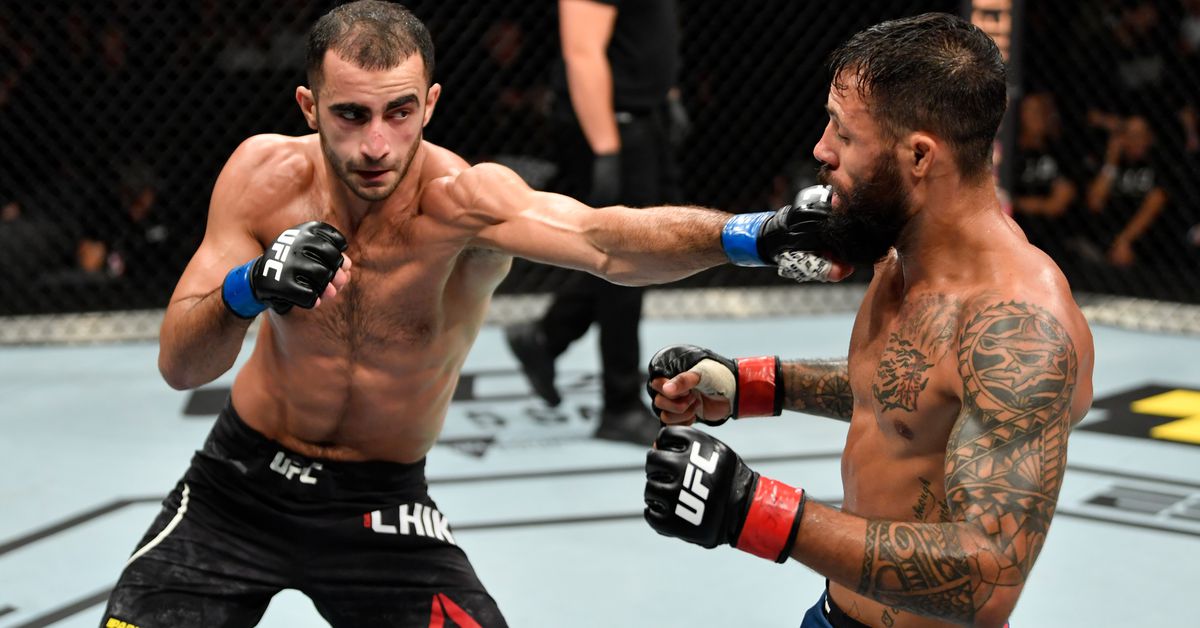 As soon as Giga Chikadze was born, his father proclaimed outside of the hospital that ‘the world champion in fighting’ had just entered the world.

Chikadze (8-2) has been involved in martial arts since he was a young child and started training karate at the age of four. As he grew older, he began boxing and kickboxing as he knew he wouldn’t be able to make a living out of karate due to the lack of money in the sport. At that time, K-1 was popular in Chikadze’s home country of Georgia so he decided that kickboxing would be his best hope of sustaining a career in the combat world while supporting his wife, who he married at the age of eighteen.

He moved to Holland, a country synonymous with kickboxing, for around seven years in order to immerse himself in the sport and he became a multiple-time world champion. However, K-1 suffered a slight decline and wasn’t doing as well as it once did, so Chikadze traveled to the US in pursuit of the next chapter in his martial arts journey.

He debated whether he should move into boxing or MMA full-time, but once he visited Kings MMA in Huntington Beach, California, his mind was made up. He hasn’t looked back since.

Chikadze joins a long line of kickboxers who made the transition to MMA including Israel Adesanya, Denise Kielholtz and Michael ‘Venom’ Page. The similarities and differences between striking techniques in both sports are often discussed with the majority stating that most skills aren’t transferable between the disciplines. This is a viewpoint that Chikadze agrees with and he believes that another stand-up martial art is actually better to utilise in MMA.

“In my opinion, karate lends itself more to MMA as a striking art than kickboxing does,” explained Chikadze. “I’m currently trying to find a perfect balance between karate and kickboxing to implement in my MMA contests. To keep a fight technical, I plan to lean on my karate background but I want to use my kickboxing skills when I need to be more aggressive.”

The former Glory kickboxer made his UFC debut last September and used his slick striking alongside his improving ground game to earn a split decision victory over Brandon Davis. However, when the result was read out in the octagon, the fight was initially announced as a draw due to a scorecard error. Chikadze and his team were downbeat when seeing the doctor backstage because they were upset to have not picked up the victory until matchmaker, Sean Shelby, entered the room and informed them that there had been a mistake. The atmosphere quickly turned from disappointment to jubilation and the celebrations began.

“When we were waiting for the scores inside the cage, I thought I would be announced as the victor having won all three rounds,” discussed Chikadze. “Brandon Davis did a good job in the last round but he didn’t really do any damage. I kept him at distance, landed some solid shots and his takedowns weren’t really successful.

“Overall, my UFC debut was an incredible experience,” continued Chikadze. “The next morning when I woke up, something had changed. I went back to training not long after the bout and my coaches were telling me that the win had turned me into a totally different fighter. That contest in the octagon had shown me that my defensive wrestling was working and that my ground game wasn’t bad at all.”

Chikadze was scheduled to make his sophomore appearance for the promotion last weekend at UFC Norfolk against Mike Davis, but the American pulled out of the contest due to an injury. However, this didn’t come as a surprise to Chikadze because he had doubts from the beginning that the fight would ever take place.

Chikadze and Davis trained together in the past but after appearing friendly at first. But then according to the 31-year-old, Davis blocked him on social media after those sessions. Chikadze also mentioned that Davis had backed out from another fight against him in the past so he almost expected the latest withdrawal.

In the days following the pullout, Chikadze and his team were searching desperately for a replacement but were struggling to find anyone. His camp had began back in November so he wanted to ensure that all of the hard work and sacrifices made during the holiday season wouldn’t go to waste.

Chikadze also claimed that he offered to step in against Luis Pena once the TUF veteran’s original opponent, Alex Munoz, fell out for UFC Norfolk but Pena took an “easier” fight against the “much smaller” Steve Garcia instead.

Everything worked out in the end, after Chikadze’s manager texted him and asked if he wanted to face Jamall Emmers on March 7 at UFC 248 instead. He accepted the bout without thinking twice and is thankful he also gets to compete on the same card as his close friend and teammate, Beneil Dariush, who helped him move to the US. Chikadze isn’t concerned about getting a new adversary on such short notice at all.

“If Emmers is going to risk playing that game [striking] against me, he will make a big mistake.”

“I actually think Mike Davis and Jamall Emmers are very similar opponents,” stated Chikadze. “Emmers is a slightly smaller guy than Mike but they are both athletic with some good striking. I believe that Emmers’ kicks are better than Mike’s and he is also better on the ground. Anyway, they both think they are strikers and if Emmers is going to risk playing that game against me, he will make a big mistake. That’s what I will prove this Saturday.”

Emmers (17-4) will be making his UFC debut this Saturday night in Las Vegas riding a four fight winning streak. He holds victories over Cory Sandhagen, Alexander Hernandez and Jay Cucciniello across a range of different promotions. The 30-year-old once appeared on Dana White’s Tuesday Night Contender Series and has finished his last five wins before the final horn. Despite not having long to get ready for Emmers, Chikadze hasn’t let the last minute switch up alter his preparations in any major way and he is expecting an impressive performance come fight night.

“I mostly approach all bouts by focusing on myself because I believe that if I am in my best shape, I can beat anyone in the featherweight division,” said Chikadze. “Of course, there are one or two changes I have made to the game plan but not an awful lot is any different to what I was originally intending on doing. I hope Emmers comes in strong and wanting to fight because I really want to give the audience a show. My prediction is that I will win by knockout!”

Merck Stock Leveled Out in 2019. It Could Return to its Glory Days Next Year.

Stories of the decade: Ten years of grief, glory and surprise in Toronto