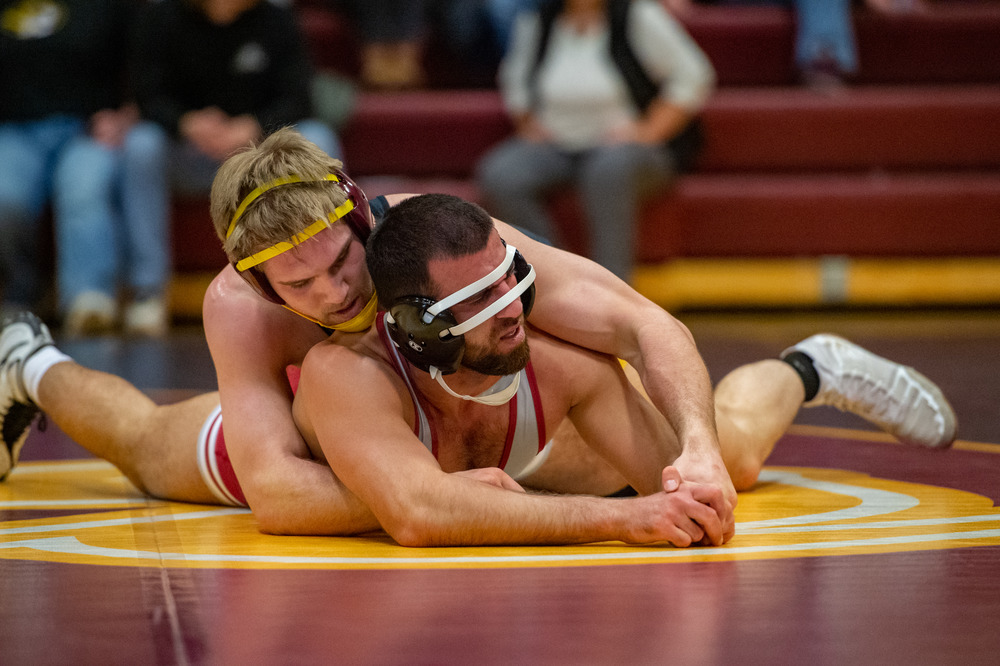 When the Montana State University-Northern Lights take part in the Parade of Athletes during the opening day of the 2020 NAIA wrestling national championships, they’ll be a smaller than normal unit. But, while the Lights may not have quantity this week at nationals, they do have quality.

Three Northern wrestlers, Nick Kunz, Chase Short and Isaac Bartel, qualified for the national tournament, which runs Friday and Saturday in Wichita, Kansas, and longtime head coach Tyson Thivierge is focusing on his three, not what could have been.

“Of course we would have liked the conference tournament to go better,” he continued. “But it didn’t go our way. It was a tough tournament, and things didn’t go our way. So we’re going to approach this week like we do every other tournament, which is, if everybody takes care of their own business, then the rest will fall into place.”

Taking care of business is something the Lights have always done at nationals under Thivierge. He’s led Northern to several trophies, countless All-Americans and four individual national championships.

And in the last three years, he’s certainly watched Bartel take care of business. The 197-pound junior finished third as a freshman and was the runner up a year ago. So Thivierge has seen the progress. Bartel has been ranked second all year at 197, brings a 29-2 record into the tournament and is the Cascade champion. He’s also seeded second to defending national champion Evan Hansen of Grand View.

“It’s a loaded bracket,” Thivierge said of Bartel’s draw. “It’s a tough weight, and it’s pretty cut and dried. We know who all the top guys are, and we know Isaac is one of them.

“Isaac looked phenomenal at the conference tournament,” Thivierge said. “He didn’t have any ring rust. He’s focused, he’s such a humble and hard-working kid, and he’s ready. Isaac knows what he has to do. He knows what it takes to get to where he wants to go. Now he just has to go out and do it one match at a time. But I know he’s ready, he looks great. He’s a beast.”

Bartel would have to contend with Hansen in the championship if they both get there. Campbelsville’s Zach Linton and Baker’s David Dow and Providence rival John Hensley are also top contenders in his half of the draw, while Hansen, and Cumberland’s tandem of Ramsey Bloy and Eric Deluse are the big guns on the top half of the draw.

At 125 pounds, Kunz is making his third straight trip to nationals. He spent much of this season at 133 pounds but dropped back down to 125 and finished third at the Cascade Championships last month. He brings a 21-11 overall record to nationals, and earned the No. 10 seed.

“Nick is back where he’s comfortable,” Thivierge said. “And he did it smart and disciplined, like how he wrestles. This is Nick’s time. He’s come so close to getting on that podium, and he’s ready to do it. He’s focused and he’s ready to go.”

Grand View’s Justin Portillo is the top seed and a defending champ in the 125-pound bracket, while Kunz is on the opposite side of the draw. He has a bye in the first round and could see either York’s Harley Williamson or

Southeastern’s Isaac Crowell in the second round. Second-seeded Emmanuel Brown of Baker is a big gun in Kunz’ quarter of the draw, while other top contenders include, Reinhardt’s Kody Miner and Life’s Alexander Nunez.

Short meanwhile, is making his second straight trip to nationals at 174. He was in arguably the toughest draw at the Cascade Championships, and while he only finished sixth, he’s definitely an All-American contender this weekend.

Short has been ranked in the Top 20 at 174 all season long and he brings a 35-15 record with him to nationals where he’ll face Missouri Valley’s William Seibert in the first round. Third-seed Michael Care of Reinhardt, second-seed Chase Vincent of Oklahoma City and defending champ Lucas Lovorn of Baker are the top contenders at 174. While it’s a really tough draw, that includes so many good Cascade rivals, like Embry-Riddle’s Daniel Butler, no one can afford to overlook Short this week.

“Chase can wrestle with anybody,” Thivierge said. “There’s no one out there Chase can’t beat. He’s wrestling really well right now, too. He is really focused and determined.

“Like with Nick, it’s Chase’ time,” he continued. “He’s ready to take the next step. He can do it. He just has to focus on one match at a time.”

And that’s the mantra for the Lights this week. They just need to worry about the match at hand, and not worry about the team points, or any other details, especially considering that Grand View is once again a heavy favorite, and while there are other strong teams in the field, the Vikings probably won’t be caught for the national championship.

“We’re preparing for nothing more than that first match,” Thivierge said. “That’s how you have to approach this tournament. You can’t look ahead or back, you just have to be ready to wrestle when it’s your turn. So again, if these three guys go out and just stay focused on what they’re supposed to do, they’re going to do a lot of damage this week.”

Doing damage is the key. The Lights are certainly short-handed in the team title race, but they can cause plenty of havoc on the field and that’s exactly what Thivierge has confidence that his guys will do.

“The key is, go down there and have a great first day, and that will lead to big things on the second day,” Thivierge said. “And I think all three of these guys are more than capable of doing that.

“They know what they have to do now,” he continued. “So it’s all about going there and doing it. So I’m, excited. Like I said, I have a lot of confidence in these guys, and they’re going to make this tournament a lot of fun.”

The 2020 NAIA national tournament begins Friday morning and runs through Saturday night’s finals, which will broadcast live on ESPN3. All the action takes place at the Hartman Arena in Wichita, Kansas.

THOUGHTS ON “THE LIGHT AND THE GLORY”