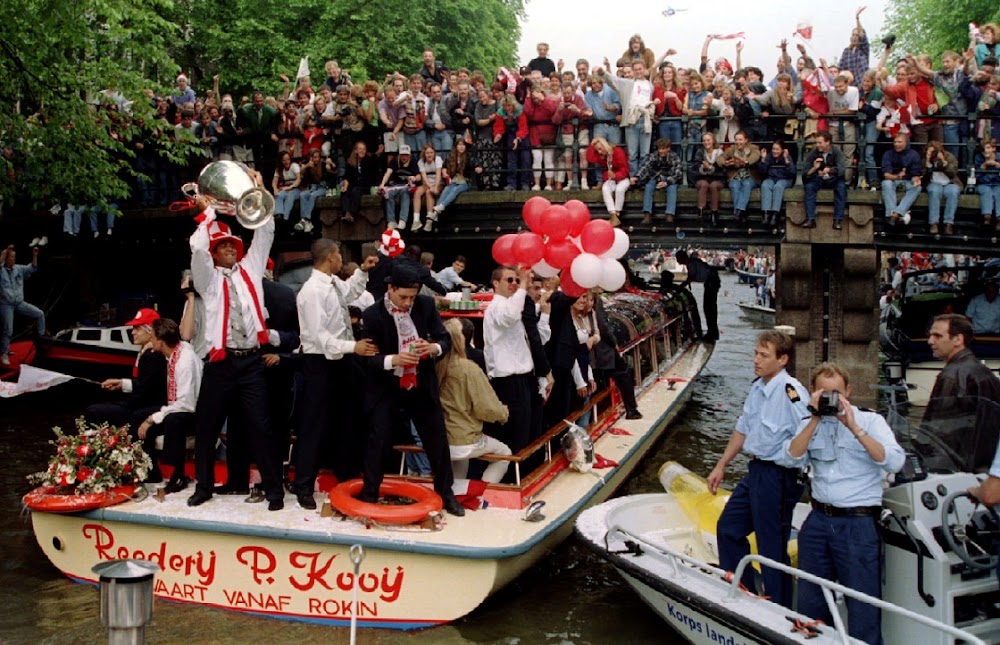 May 25, 1995: Ajax Amsterdam striker Patrick Kluivert and teammates celebrate with thousands of supporters along the canals of Amsterdam after beating AC Milan to win the European Cup a day earlier.

Teenage substitute Kluivert scored with five minutes left to crown Ajax champions for the first time in 22 years with a 1-0 win over holders Milan in a largely disappointing final.

Ajax’s victory was also special for veteran Frank Rijkaard, who became the fifth man in the competition’s history to win the trophy with two different teams and the first to win against a former club.

May 25, 1997: Jacques Villeneuve wins the Spanish Grand Prix. The victory was the Canadian’s third of the season and seventh of his career, taking him to 30 points in the championship.

The Williams driver made the most of his pole position by taking the lead immediately and controlled the race from the front, only losing the lead briefly when he made pit stops.

He came home a comfortable five seconds clear of second-placed Frenchman Olivier Panis in a Prost. Jean Alesi of France finished third in a Benetton.

May 25, 1998: Argentine striker Gabriel Batistuta finds the back of the net against SA in a friendly match at the River Plate stadium in Buenos Aires.

Batistuta scored his fifth international goal in three games as Argentina finished their World Cup preparations with a win over fellow finalists SA. He broke the deadlock in the 50th minute and Ariel Ortega added a second with the last kick of the game.

May 25, 2002: Ireland captain Roy Keane is sent home from the World Cup in South Korea and Japan after a row with manager Mick McCarthy at a meeting over training facilities.

“Hopefully, I might get back to playing for the Irish team again. But I will only go back if there is a new manager — and that is out of my hands,” Keane told reporters a month later.

The fiery midfielder returned to the national team in 2004 under new boss Brian Kerr before announcing his international retirement a year later after Ireland failed to qualify for the 2006 World Cup.

May 25, 2008: New Zealand’s Scott Dixon of the Target Chip Ganassi IRL wins the 92nd Indianapolis 500. Vitor Meira finishes second and Marco Andretti third, while Danica Patrick is knocked out of the race in a pit-lane crash.

An excited Dixon was greeted in Victory Lane by his wife Emma, and then celebrated his $2.5m win with a chug from the traditional bottle of milk.

“What a day, man,” Dixon, who held on from pole to prevail in the 200-lap race, roared. “I just couldn’t believe it. You just thought something was going to go wrong.”

May 25, 2012: Barcelona players celebrate after beating Athletic Bilbao 3-0 in the King’s Cup final at the Vicente Calderon stadium in Madrid.

The victory was a fitting farewell to Barcelona boss Pep Guardiola, who ended his glittering four-year reign as coach by winning a 14th trophy.

Pedro scored a brace and Lionel Messi added another to finish the season with 73 goals in all competitions.

May 25, 2013: Bayern Munich beat Borussia Dortmund 2-1 in their Champions League final at Wembley in London.

Arjen Robben scored an 89th minute winner to seal Bayern’s fifth title in the competition. The Dutchman raced into the area and beat goalkeeper Roman Weidenfeller in a stunning end to the first all-German Champions League final after Mario Mandzukic’s goal was cancelled out by Ilkay Guendogan’s well-struck penalty.

May 25, 2014: Serena Williams of the US celebrates victory over Alize Lim of France in their women’s singles match at the French Open at Roland Garros in Paris.

Williams, the top seed and overwhelming favourite to retain the title, needed time to find her rhythm against Lim before winning 6-2 6-1. But the American crashed out of the tournament in the second round after being thrashed 6-2 6-2 by Garbine Muguruza.

May 25, 2019: Bayern Munich celebrate winning the German Cup after a 3-0 victory over RB Leipzig in the final.

Lewandowski sealed victory with a fine run and superb finish in the 85th minute.

Glory to God — Across the Land the Story is Told