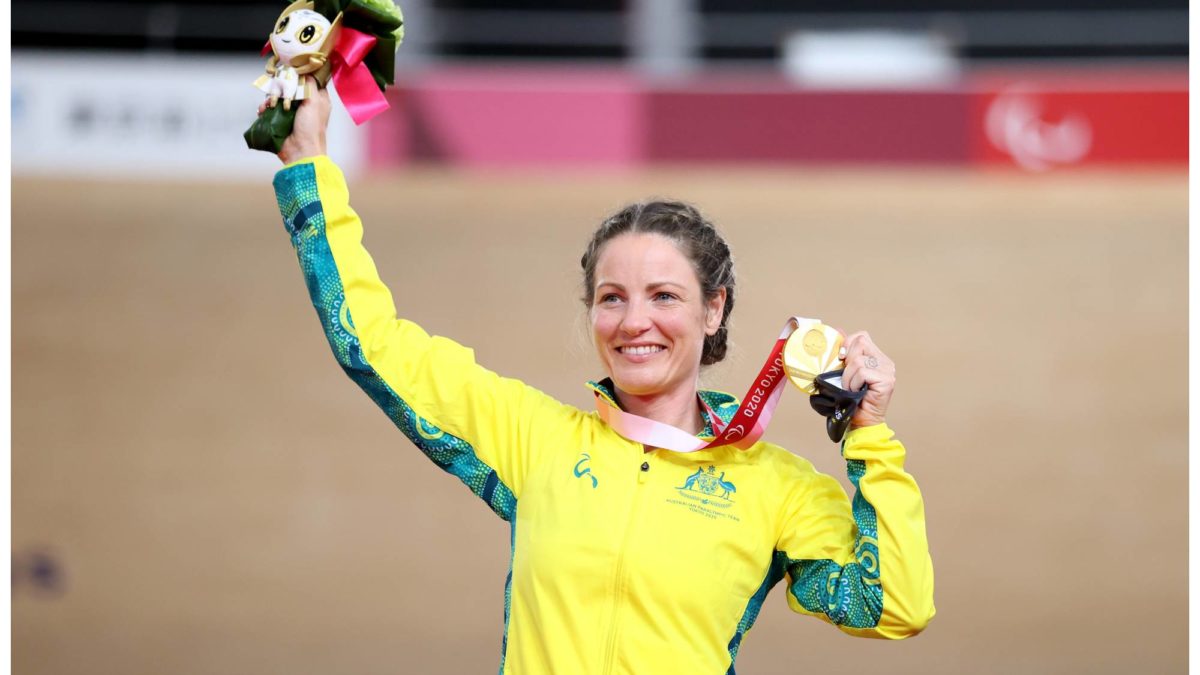 I’ve done a lot of interviews, sat down with footy players of every stripe, been glared at by Steve Waugh, hung up on by plenty more, but no one has stopped me in my tracks and moved me quite like Emily Petricola.

Petricola, who broke a world record and won a Paralympics gold medal in Tokyo on Wednesday, shared her story with me for The Roar’s sister publication AthletesVoice in 2019. It’s an astonishing yarn of the fragility of life and its sudden twists, and the wonderful redemptive power of sport and friends.

Her life changed in a day, one she remembers with brutal clarity.

In 2007, aged 27 Petricola ran her own consultancy business and was working at a client’s, a slick, modern place with polished concrete floors.

“I was wearing cute new shoes and kept tripping over,” she said. “At lunchtime, figuring it was the shoes, I went out and bought a new pair. But the tripping kept happening, and not just on their floors.

“Over the course of the next week, the numbness that had started in my feet that day started to travel up to my chest.”

Petricola put it down to a hangover from a bout of gastro a week before, or a pinched nerve. She waited for it to fix itself but the numbness crept up closer to her neck.

“One night,” she recalled, “I called one of my best mates, who lived not far from me, and told her, ‘You need you to call me at seven tomorrow morning and if I don’t answer you need to come around because it means that I can’t walk. I’m scared that I’m about to become paralysed.’”

The next day Petricola went to a doctor, who referred her to a neurologist who found a lesion on her C2 and C3 spine.

Thaey told her it could be Multiple Sclerosis.

“My stomach sank and I knew that was what it would be,” she said. “It was an intuition.”

She was quickly diagnosed and began living, and not always successfully by her own admission, with the disease.

MS is a disease that attacks the nervous system. Everyon’s experience with the disease is individual and there is no set course or cure for it.

For Petricola it means numbness and pain.

“I get what’s called an MS hug when it’s too hot, or when I’ve overexerted myself or if I’m too tired, which is where it feels like you’re being squeezed from the inside,” she said.

“I consistently have issues with my hands, which don’t work properly, I have issues with balance and I have foot drop in my left foot – I can’t lift it all the way up so when I walk, I trip a lot because it catches on the ground, on stairs, etc.

“If I put my head forward too quickly, which is usually when I’m laughing, I’ll get like an electric shock through from my neck to my toes.

“I’ve got weakness across all four of my limbs. I’ve got tremors in my arms, sometimes in my legs. I get wicked vertigo without warning.

“It’s just like a slow disintegration, effectively, of various points in the body. What is incredible though, is seeing how your body finds its way around these limitations and other muscles pick up the slack for those that don’t work the way they should.”

Straight after her diagnosis, Petricola resisted changing her outlook. Her friends called her the ‘queen of denial’.

“I just wanted to pretend like I could keep going like I had before. Even though my body kept telling me I couldn’t,” she said.

“Then something happened that altered my view and (I know this sounds ridiculous) taught me how lucky I really am.

She started a vourse of treatment of medication where she visited Melbourne Private Hospital for an infusion every four weeks for six years. Once a month she sat in an oncology ward alongside cancer patients.

“I met the most inspiring and positive group of people,” Petricola said. “We were all fighting our own battles, but never made it the focus of our experience during treatment, as strange as that may sound. This was the experience that has been most meaningful for me, in terms of everything that’s happened so far.

“Even though my disease is horrible, and I wouldn’t wish it on my worst enemy, I’m not dying of cancer today and my illness doesn’t define me or how I operate in my life. There’s still so much of life to be lived for me.”

But she was still a long way from being a Paralympian.

“When I was diagnosed it started a long period, around six years, where I couldn’t do any physical activity,” she recalled.

“I was about 62-63 kilos when I was diagnosed and post-diagnosis I became enormously overweight. My heaviest known weight was 115 kg (once I reached this I didn’t go near a scale for a while).”

Her constant relapses meant steroids as treatment, which saw her weight balloon, and she if she tried to exercise her body would shut itself down. And, she said, “I ate a lot of peanut butter toast.”

“I’ve got a before photo and then a photo of me, maybe a year or two after I was diagnosed, and whenever I talk to kids at schools it’s one of the first things that I show,” she says. “They can’t believe it’s the same person.”

Getting sick also meant she had to shut down her business and work for others.

“I felt I had lost my whole identity – that my life changed in a day,” she said.

Work took her to Wesley College in Melbourne where she was in the rowing program, alongside Matt Ryan, a rower at the Beijing and London Olympics, who she tearfully thanked on Wednesday along with another Olympian, Shane Kelly, a friend who later became her first coach.

“They’ve changed my life and they saved my life. I was in such a dark place.”

Ryan helped Petricola with a fitness plan involving a stationary bike in their office with the aircon going full strength and a fan blowing the cold air in her face, to combat the heat issues associated with MS.

It was Ryan, too, who urged her to seek classification as a Paralympian.

Kelly, a five-time Olympic cyclist, multiple-time world record holder and three-time Olympic medallist, is the husband of one of her best mates.

“I asked him if he’d help coach me. He didn’t really have a choice but, in any case, he said ‘yeah absolutely’,” she said.

“From that moment, we started on this path. I would never have thought that my body was capable of doing anything near what it’s currently doing.

“But both Matt and Shane believed it possible for me. Whenever there was an MS roadblock, they would find a way around it.

“It’s no exaggeration to say that Matt and Shane saved my life. I say that because I was in such a bad place and their belief in me is the only reason that I’m doing what I’m doing today.

“Having something positive to focus on in that moment in my life kept me moving forward.

“I’m doing this as much for them as anything else – I want to prove that they were right to see something in me.

“That’s what motivates me to get up and do what I’ve got to do every day, thinking that those two men, themselves incredible athletes and coaches, thought that I could, when no one else (including me) did.”

Kelly had his own setbacks, although no one is suggesting they’re on the same scale as Petricola’s.

His most famous one was at the 1996 Olympics when he went into the 1000m time trial as world champion and gold medal favourite, and his foot slipped off the pedal at the start meaning he was disqualified without getting to ride.

Paige Greco and Emily Petricola make it two golds for #AUS on day one of the #ParaCycling! #Tokyo2020 #Paralympics @AusCyclingAus @AUSParalympics pic.twitter.com/z3LSaV2f1C

“His approach to winning and losing is something that has really been integral for me, because I lost a lot of races before I became successful,” Petricola said.

Kelly was there for her first velodrome sessions after she transitioned from road racing.

“I had only seen velodromes when my best mate and I had watched Shane race years prior and even then I probably was more interested in having a glass of wine and a chat with her!” Petricola recalled.

“I’ll never forget how intimidated I was when I turned up for the first couple of four-hour sessions with Shane.

“It was terrible. It took until the last hour of the second session for me to actually get onto the boards because I was so scared by them – I was convinced that my poor balance would mean I would definitely topple over.

“But I remember saying to Shane at the end of the very first session, ‘This may feel like it’s hard to believe, but I’m going to win gold medals on the track. I promise you.’ Being Shane, he said, ‘Oh, I believe it, I believe it’.

“I think about it now and there’s no way he could have believed it!”

On Wednesday, with one of the greatest, and most underrated achievements in Australian sport, she delivered on her promise.