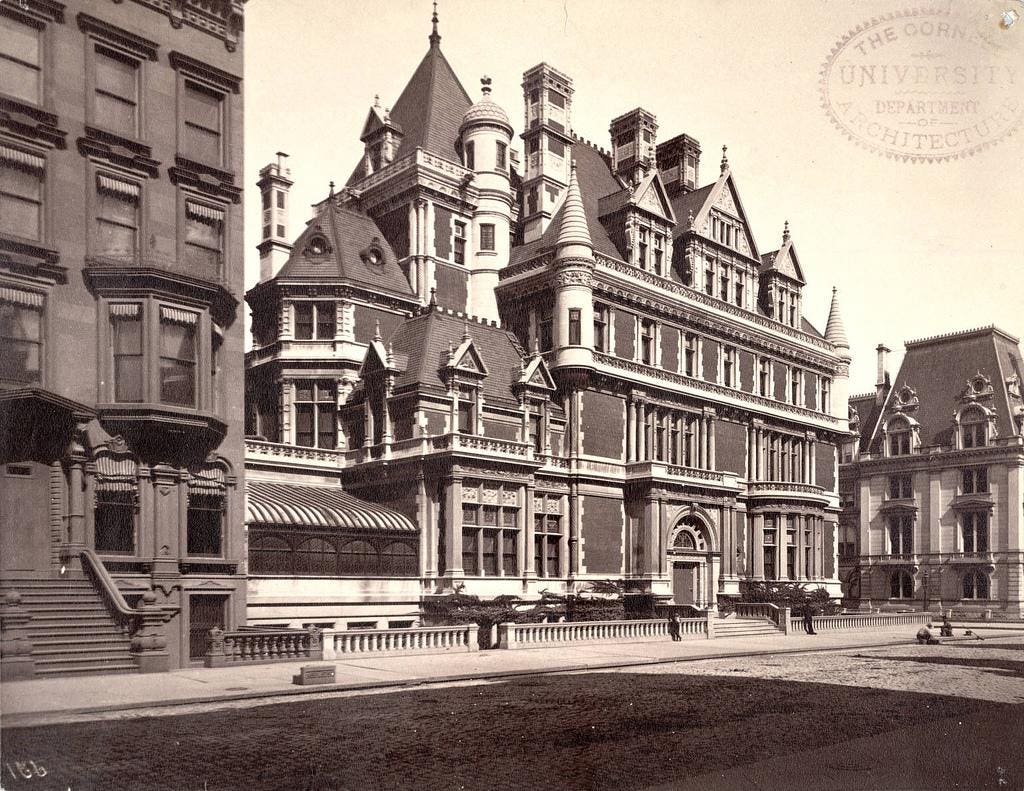 Editor’s note: Gloria Vanderbilt died on June 17, 2019, at the age of 95. Here is a look at her family’s famous fortune, and how they largely squandered it.

The Vanderbilts’ lavish homes, opulent parties and colorful characters made them the Gilded Age’s poster family. At one time some of America’s richest thanks to a booming railroad business, they have seen their dollars turn to dust. So where did it all go?

Cornelius “Commodore” Vanderbilt started the family business by borrowing $100 from his mother and piloting  a passenger boat on Staten Island in 1810. He  expanded into steamboats and then went on to build railroad empire New York Central. Its tracks stretched Vanderbilt’s empire across the United States and gave him a monopoly for all rail service in and out of New York city.  He reportedly accumulated a $100 million fortune by the time of his death in 1877 – more than was held in the U.S. Treasury at the time.

“Any fool can make a fortune; it takes a man of brains to hold onto it,” Commodore is said to have told his son William Henry “Billy” Vanderbilt, according to Fortune’s Children: The Fall of the House of Vanderbilt, a family history written by cousin Arthur T. Vanderbilt II.

Young Billy did his best: he inherited the family’s 87% stake in New York Central and expanded the business, reportedly doubling the family fortune to over $200 million.

Cornelius had urged that the bulk of the family fortune be endowed upon one descendant, but when Billy died in 1885, he left the family’s stake in the company to both of his sons, Cornelius Vanderbilt II and William Kissam Vanderbilt. The division of the Vanderbilt fortune in the third generation coincided with a decline in family interest in New York Central – and a gradual increase in spending.

Cornelius Vanderbilt II managed the railroads until his death in 1899. William Kissam Vanderbilt took over but retired soon after to concentrate on his yachts and thoroughbred horses, while brother George Vanderbilt’s 146,000 acre Biltmore estate ate into his branch of the family fortune. According to Vanderbilt’s book, William is said to have remarked: “Inherited wealth is a real handicap to happiness… It has left me with nothing to hope for, with nothing definite to seek or strive for.”

The Gilded Age brought with astonishing spending and endless rallies to keep up appearances. Among the Vanderbilt family’s prized assets were an impressive art collection of old masters and a string of houses in Newport, Rhode Island, including The Breakers, and 10 mansions on Fifth Avenue in Manhattan.

The Vanderbilts also became philanthropic – third generation William Kissam Vanderbilt gave $1 million to built tenement houses in New York city, as well as hundreds of thousands of dollars to Columbia University, the YMCA, the Vanderbilt Clinic and Vanderbilt University. It was the third generation who stopped growing the fortune: William’s extensive philanthropy and spending left an estate reportedly worth the amount he had inherited in 1885 when his father died.

Perhaps the most notable fourth generation Vanderbilt was  Cornelius’ son Reginald “Reggie” Claypool Vanderbilt, an avid gambler and playboy. He was the father of fashion designer Gloria Vanderbilt, and grandfather to CNN anchor Anderson Cooper. His brother, Cornelius “Neily” Vanderbilt III spent vast sums on maintaining a high society appearance. “Every Vanderbilt son… has increased his fortune except me,” Niely once remarked, according to Fortune’s Children.

As the family inheritance was dispersed between more and more descendants, New York Central was undergoing changes. The transport business had peaked in late 1920s, but freight soon declined and by the end of World War II trucks, barges, airplanes and buses had cut into its industry. Between 1946 and 1958 it dropped four of its six fast daily passenger runs between New York and Chicago.

New York Central was once the second-largest railroad in the United States, with 11,000 miles of track spanning 11 states and two Canadian provinces. By 1970, its latest iteration declared bankruptcy; passenger services were taken over by the federal Amtrak in 1971.

In April this year, 6th generation Vanderbilt Anderson Cooper told Howard Stern’s radio show: “My mom’s made clear to me that there’s no trust fund.”

Indeed, all of their New York city homes had been torn down by 1947. Today, the wrought iron gates from a Vanderbilt mansion are now the entrance to a 5-acre conservatory garden in Central Park; Cornelius and Alice Vanderbilt’s block-long house in Manhattan’s midtown district 57th Street is now occupied by high-end department store Bergdorf Goodman.

And though there are not enough readily identifiable businesses or substantial inheritances to warrant the Vanderbilt family a spot on Forbes’ inaugural America’s Richest Families list, their legacy lives on through the Vanderbilt University in Nashville, Tennessee, and Vanderbilt Avenue in New York’s Manhattan and Brooklyn.