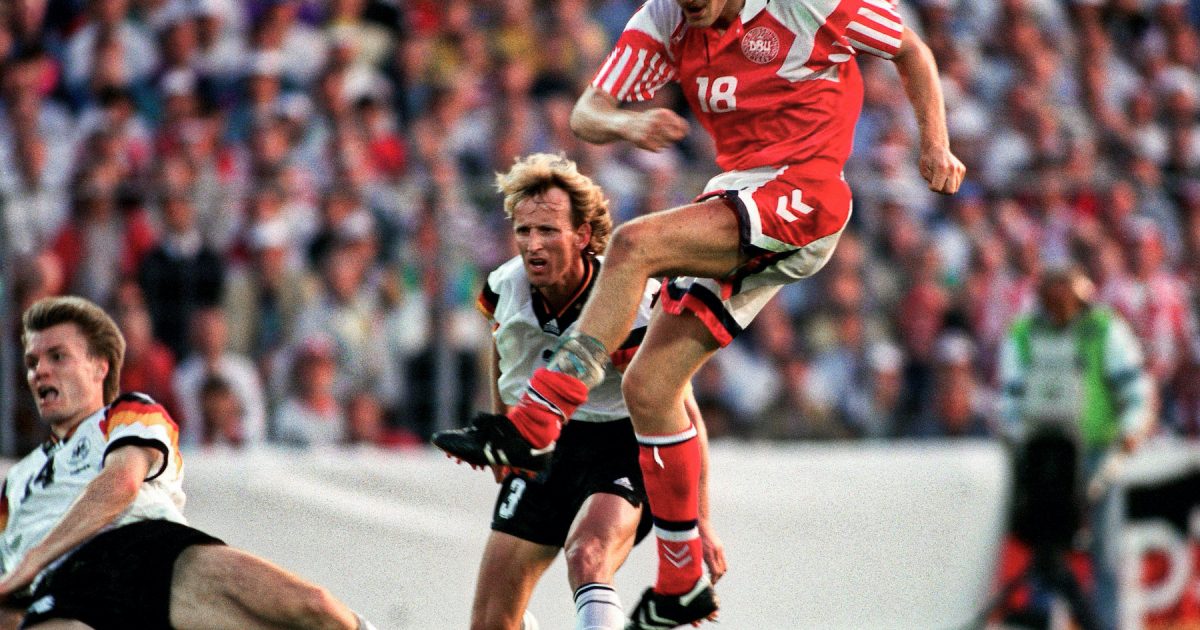 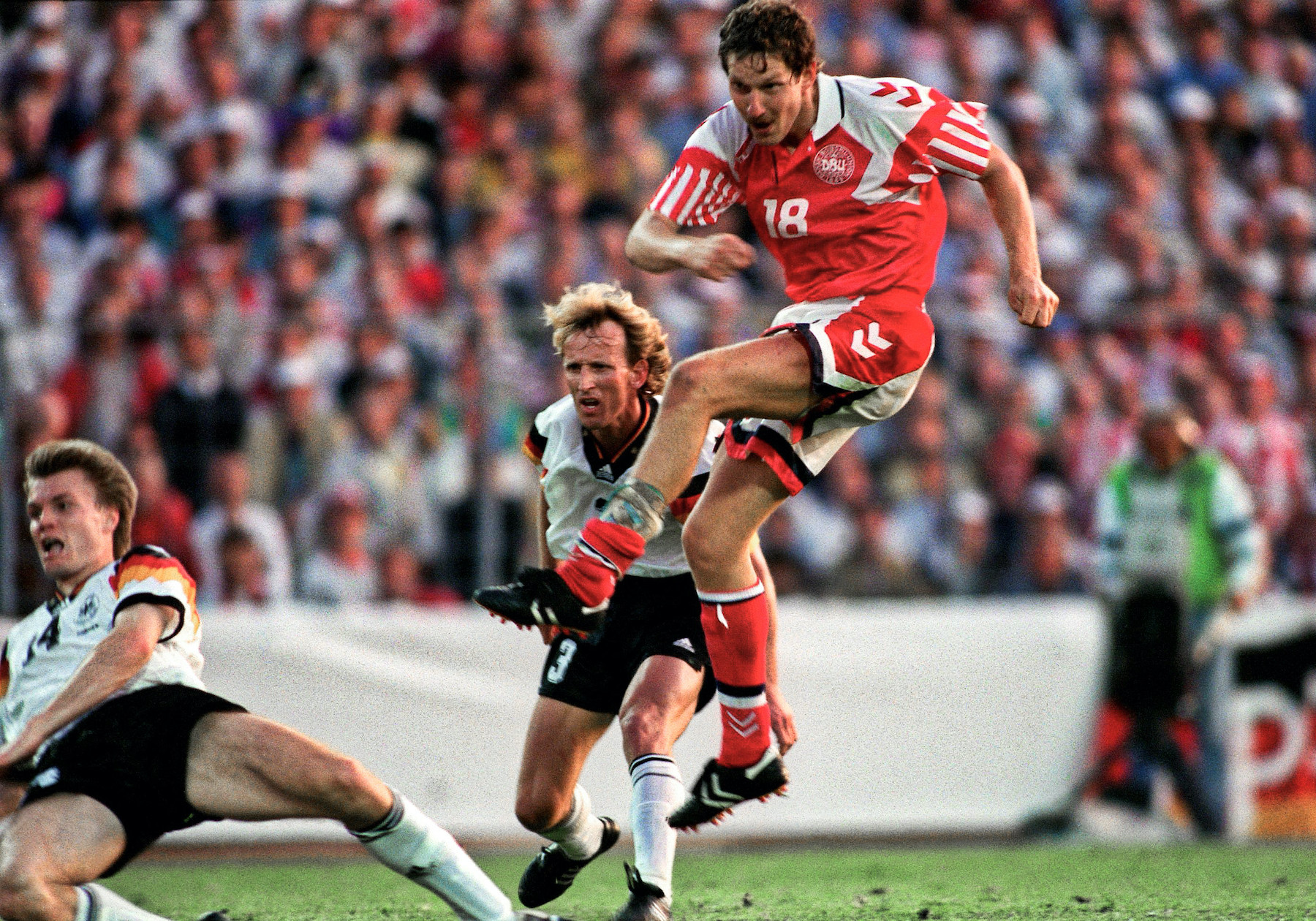 Denmark were clinging on. All the forward momentum was with the Germans as they lay siege to the Danish goal. Peter Schmeichel, that obstinate rock of a goalkeeper, was performing heroics to keep them at bay, but surely it was only a matter of time before the equaliser came? Remarkably, Denmark – a team who hadn’t even originally qualified for Euro 92 – were on the verge of winning it all. Leading 1-0 through an improbable John Jensen exocet, they were doing all they could to hold on but looked set to buckle at any moment.

Then, with 12 minutes remaining the ball was fed through to Kim Vilfort, their attacking midfielder, in the German penalty area. Time stood still. All eyes were on Vilfort as he controlled, turned and faced up to Bodo Illgner in the German goal. With the chance to seal Denmark’s finest footballing moment, with Vilfort was set to become the hero, a tragedy unfolding in his personal life would provide a sobering backdrop to his efforts in Gothenburg’s Ullevi Stadium that day, and a compelling story for those of us watching on as he struck for goal and glory.

As a youngster, Vilfort came to prominence thanks to a prodigious scoring record when he made his breakthrough in Denmark’s top league with Frem – a club near to the Valby suburb of Copenhagen from which he hailed – having come through the youth set up in nearby Skovlunde. His four seasons in the early 1980s with Frem earned him both recognition and a move to Lille in France in the summer of 1985.

His international career, which began with a 1983 debut in Olympic qualifying, was rather more fruitful for Vilfort than the move to France. He would go on to make 77 appearances spanning more than a decade for his country, while his club sojourn to France ended after just one season. He returned to Denmark, to Brøndby – the club he would become synonymous with.

He would go on to play for the Copenhagen giants for 12 seasons, graduating from striker to attacking midfielder, becoming a true club legend and their all-time top scorer – a record he still holds to this day – and playing a part in winning ten major titles. Vilfort also became a regular feature in the national side, playing a couple of times in Denmark’s unsuccessful Euro 88 campaign.

By the time of the subsequent European Championship, he had become Danish Player of the Year in 1991 having helped Brøndby to the semi-finals of the UEFA Cup. In all, ten of the players who would make the Euro 92 squad came from this successful Brøndby team, forming a cohesive nucleus to the national side.

The international highs of Euro 84 and the World Cup of 1986, where Sepp Piontek’s Danish Dynamite were one of the most attractive and most lauded teams, had seen the talents of Michael Laudrup and Preben Elkjaer thrill the watching world. However, things had already begun to go awry ahead of the disappointment of Euro 88, with an Olympic qualifying campaign ending in controversy due to fielding an ineligible player when seemingly on course for qualification.

Read  |  Michael Laudrup and Preben Elkjær: a fantasy partnership devised in the heavens

Many of that squad would become a part of the full national side going forward. Vilfort was one of those to become an international regular during this era, along with the likes of Schmeichel, Lars Olsen, Kent Nielsen and John Jensen. That Olympic squad would also provide the manager who would lead Denmark into the 1992 Euros, Richard Møller Nielsen, who had been assistant to the popular and successful Piontek.

Nielsen would suffer by comparison to his predecessor in many ways, but particularly in the style of play he espoused. His more pragmatic approach was the source of the discord with the Laudrup brothers, Michael in particular. The qualifying campaign for Euro 92 had been a turbulent one. Having already been held to a draw in Northern Ireland, an early loss at home to Yugoslavia prompted Michael Laudrup to quit international football at the age of 26, while his brother Brian also walked away from the squad. Both felt unable to play under the Nielsen regime and what they saw as his stultifying tactics.

However, shorn of two of their best players, the team’s fortunes improved. They won all five of their remaining games, including away in Yugoslavia. And yet it wasn’t enough. Their early slip-ups left them unable to catch the Yugoslavs, and another tournament summer would pass them by.

That all changed with the UN sanctions against Yugoslavia, which prompted UEFA to prevent them from taking their place in the finals. With just ten days to go before the tournament, Denmark were invited to take their place. The tale of the Danish squad having to be recalled from the beach to take part is rather apocryphal, given most of the squad were involved in international friendlies around that time and were preparing to face the CIS (former USSR) when they heard the news. Indeed, there had been a lot of talk that a late inclusion was a possibility.

The lack of preparation was, of course, a reality, and to many observers, they were essentially coming in to make up the numbers. Nobody expected Denmark to be able to compete.

That the core of the squad came from Brøndby helped, but also this was a very talented side. Having only narrowly lost out to Yugoslavia – a team talented enough to count as one of Europe’s best at the time – Denmark were clearly capable. In another group they may have qualified automatically.

With the return of Brian Laudrup to the fold, it was only the missing Michael who didn’t join the squad in Sweden for the 1992 finals. They may not have had the best players that summer, but they had a strong team with a great spirit. And, given their late inclusion, they enjoyed a very relaxed atmosphere with little pressure. 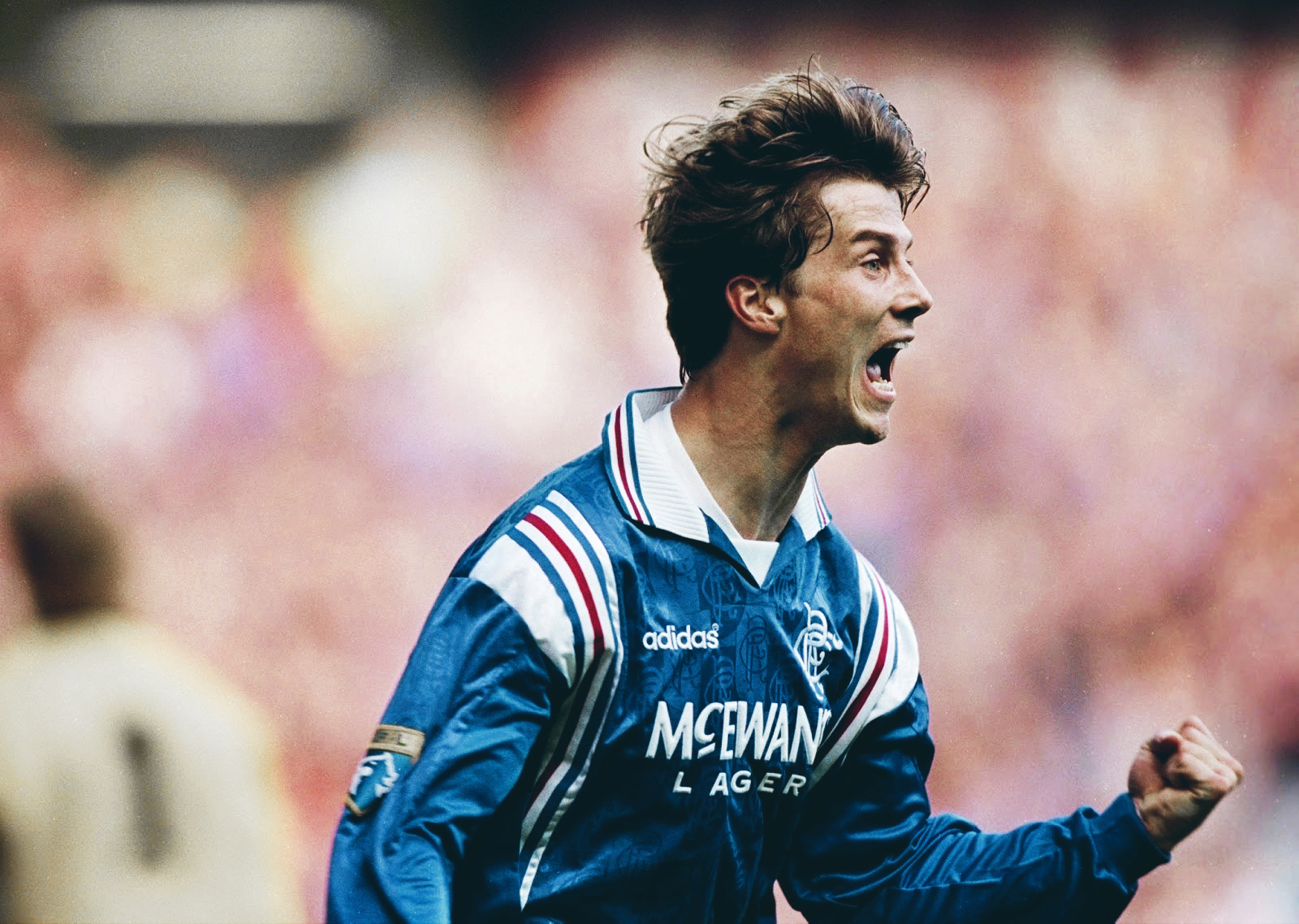 Read  |  Remembering the artistry of Brian Laudrup for Rangers

Vilfort was aged 29 in the summer that would define his career. While the rest of his colleagues were able to embrace and enjoy their tournament inclusion, for Vilfort, it came while his private life was falling apart. His seven-year-old daughter, Line, was in hospital undergoing treatment for leukaemia  Vilfort joined the squad in Sweden later than his teammates having been reassured that his daughter seemed to be responding well to her treatment.

He joined a team that held their own in their opening group games, without overly impressing. A goalless draw with England was followed by a narrow loss to Sweden. This meant that any hope of progression came down to needing to beat a France side that was one of the tournament favourites. They would have to take on the French without Vilfor,t though.

Having featured in the first two matches, Vilfort had to return to Copenhagen and his daughter’s bedside; her condition having worsened as the tournament progressed. Thoughts of football glory must have been the furthest thing from his mind at that time, Line’s health deteriorating to the extent that the hopes of the Vilfort family were beginning to fade.

In his absence, Denmark, expected to return home shortly, were able to play without nerves, while the French were stultified by mounting expectation. Against all expectations, a dramatic late Lars Elstrup goal won the match 2-1 for Denmark and suddenly the outsiders were in the semi-finals.

For Vilfort, this could have presented a dilemma. He was clear in his mind, however, that he would not return to Sweden but stay with his wife and daughter. His family persuaded him that he should play the semi-final and return to them a few days later, win or lose. Denmark were not expected to win their clash with the reigning European champions, the Netherlands. We can only speculate at what an agonisingly difficult decision this must have been, but it was one that would have a significant bearing on the tournament and Danish destiny.

Given the team had beaten France without him – his replacement, Henrik Larsen, had scored the opener against the French – there must have been a doubt whether Vilfort would even come back into the team. He had been a stalwart of the previous few years, however, and in the end both Vilfort and Larsen were selected by Nielsen for the semi-final against the Dutch. It was an inspired decision. “One of the best games I ever played in,” was Vilfort’s assessment, in spite of the trauma he must have been feeling inside.

While Larsen stole the headlines with his two goals as Denmark twice took the lead, Vilfort’s contribution was no less vital. In his attacking midfield role, as one of the few offensively minded players in the side, he provided a vital outlet when his side were under pressure, and his boundless energy and persistent adherence to the tactical plan in an outnumbered midfield was astonishing. 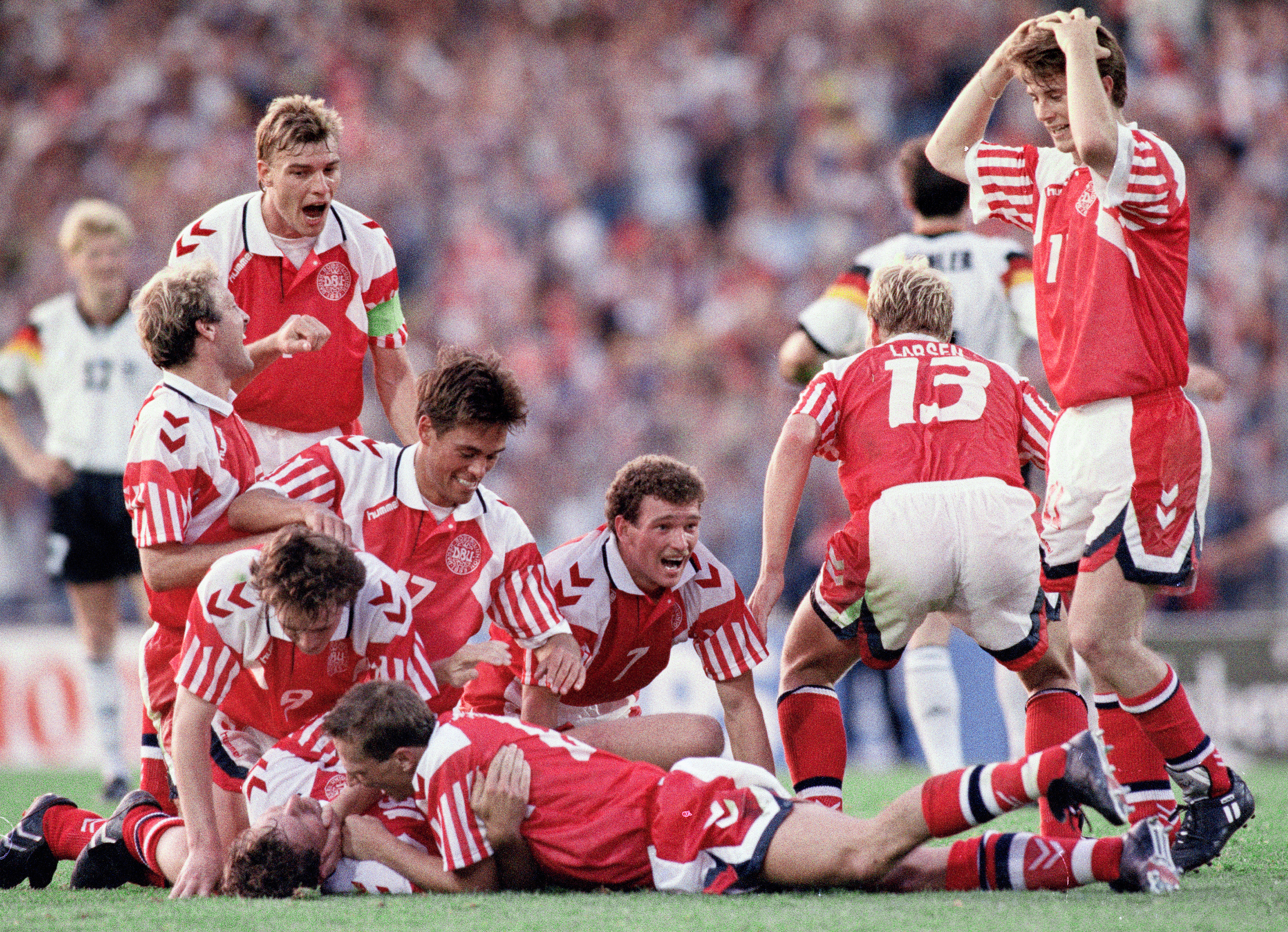 Up against the likes of Frank Rijkaard and Ruud Gullit, and frequently a deep-lying Dennis Bergkamp, Vilfort, Larsen and Jensen protected their defence with resolute determination. It was only a scrappy goal a few minutes before the end that saw the Dutch force the match into extra-time with a 2-2 draw.

It would go all the way to a penalty shoot-out, with Denmark clinging on in the latter stages. Vilfort confidently despatched Denmark’s fourth penalty as the team nobody expected to even see in the tournament made it all the way to the final. “You can never be certain you will score,” he said. “But you must believe you will – and block everything else out as you walk to take it.” Vilfort had more demons than most to block out.

He returned to Denmark straight after that success, again not expecting to return even though Denmark had a final to play. It was Line herself, his ailing daughter, who pleaded with Vilfort that he return to Sweden one more time and represent his country in their biggest moment. He trusted the tremendous courage of his daughter, rejoining the squad on the eve of the match.

Then came Jensen’s stunning striker and Schmeichel’s goalkeeping heroics as Denmark clung on, stemming the tide that threatened to overwhelm them. With 11 minutes left, Vilfort’s moment had arrived. He latched on to forward header outside the German box and worked his way between the defenders and into a shooting position. His left-footed drive flew past Illgner and, via the far post, nestled in the back of the net. Denmark had achieved the seemingly impossible.

Many of the team freely acknowledge that had Germany scored, there is no way they could have regrouped to win the match. Vilfort’s moment gave all of the defending and all of the phenomenal saves meaning. Denmark’s fairy tale was complete. In a team of heroes, Vilfort stood tall amongst them.

As described by his former coach Morten Olsen, he had “an indomitable winning mentality” and he “always believed it could be done, no matter how bleak things looked.”  This attitude was surely never more apparent than in the midst of the triumph and trauma of his summer of 1992.

For Vilfort, the joy of victory was short-lived. There was to be no off-field miracle to match the footballing one. Only a few weeks after watching her father become a Danish legend in a match she had insisted he take part in, Line Vilfort lost her battle with leukaemia.