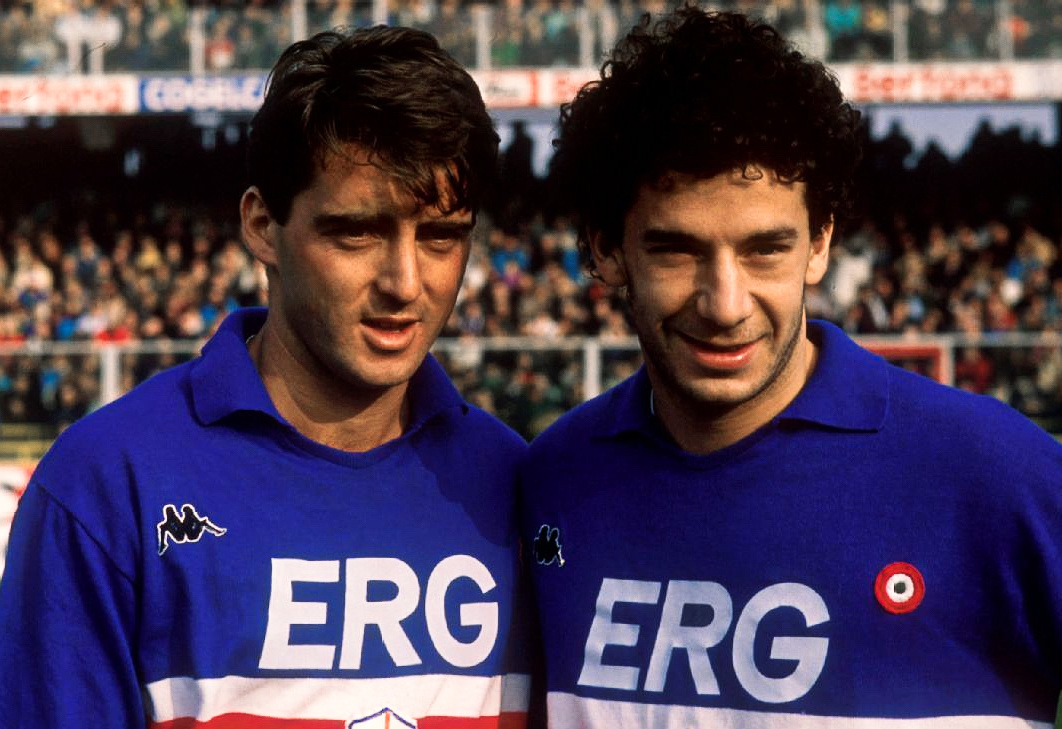 It’s been 30 years since Sampdoria lifted the Scudetto. Where has the time gone? As part of the celebrations, These Football Times and Cult Kits have joined forces for a weekend of fun, with features, a podcast, giveaways and more all online.

1964 was a big year for football in Italy. Helenio Herrera’s Inter defeated Real Madrid in the European Cup final, Roma lifted the Coppa Italia in a dramatic replay and Bologna won their seventh Scudetto.

And in two very different parts of the country, a pair of the finest players Italy has ever produced were born. First came Gianluca Vialli. Born in the Lombardy region of northern Italy, young Luca grew up surrounded by luxury and called the 60-room Castello di Belgioioso home.

Some five months later, and 400km to the south, Roberto Mancini was born into a devout Catholic household in the ancient town of Jesi.

While the pair’s upbringings varied drastically, their shared love of football began to develop at a young age.

From the age of nine, Vialli began regularly making the 45-minute trip from his home to local amateur side AS Pizzighettone. To the south, Mancini was also taking his first steps in the game. At just six, he had begun playing, and starring, for local side Aurora Jesi.

While Vialli may have been something of a late bloomer, Mancini’s potential to reach the very top was never in doubt. Despite interest from some of the giants of the Italian game, including AC Milan, he signed for Bologna aged 13. It would be around this time also that Vialli made the more inauspicious move from his amateur youth team to the youth ranks of Cremonese, then a Serie C side.

It would be Vialli who would be the first to debut in the senior game, making his first Serie C appearance at just 16. But it wouldn’t be long before Mancini would follow. On 13 September 1981, still three months shy of his 17th birthday, Roberto made his bow in Italy’s top flight.

A remarkable season followed as the youngster scored nine times in 30 appearances, marking him out as one of Italy’s hottest footballing prospects. With the big clubs circling, it was Sampdoria who would ultimately land his signature.

Funded by the ambitious and wealthy Paolo Mantovani, the next two years saw Mancini joined by a litany of foreign talent. Trevor Francis and Liam Brady joined the side in the same summer as Mancini, with Graeme Souness arriving two years later.

But despite the interest in the club’s new stars, it was one of the quieter arrivals who would ultimately make the greatest mark on Samp’s history. After four years of leading the line at Cremonese, during which time the club had risen from Serie C to achieving promotion to the top flight for the first time in over 50 years, the 19-year-old Vialli was attracting suitors from all over Italy – particularly as he had finished the historic Serie A promotion season as top scorer.

Mancini and Vialli had already begun to bond away from club football in the Italian under-21 set up, with Mancini repeatedly tapping up Vialli and selling the notion of joining him at Sampdoria. It worked. Despite interest from a number of major clubs, Vialli elected to join Mancini and the highly ambitious project at Sampdoria in 1984.

Listen  |  The story of Sampdoria’s incredible Scudetto 30 years on

In their first season as a partnership, with the pair playing regularly, the side finished fourth in the league and won the Coppa Italia for the first time in their history. The 20-year-olds scored both goals in the second leg of the final against a Milan defence marshalled by the great Franco Baresi.

It would be with the arrival of the jovial Vujadin Boškov as manager at the start of the 1986/87 season that the pair truly began to flourish. The departures of Souness and Francis at the end of the previous season left Mancini and Vialli as the undisputed focal points of the side. With the pair now being referred to as the “goal twins” up front, Samp went on a remarkable run.

Mancini had by this time transcended his role and was now the undisputed leader of the team on the pitch (and all but an assistant manager off it). Vialli, as he always did, provided the goals, finishing the season as the league’s top scorer – a magnificent achievement given his troubles for Italy at Italia 90.

They had lifted Sampdoria to the very apex of Italian football, claiming every accolade possible along the way – and their Scudetto triumph meant that for the first time ever, Sampdoria competed on European football’s greatest stage: the European Cup.

After an exhausting campaign in which they lost only two of ten games on the way to meeting Barcelona in the final, they ultimately fell just short with the tie settled in extra-time thanks to a 112th-minute free-kick from Ronald Koeman.

It would be the last match that Mancini and Vialli ever played together at Sampdoria. Just two months after the crushing loss, Juventus opened their chequebook to sign Vialli – and the era of the goal twins was over.

Although on different paths, the two remained close. Twenty-five years later, the pair reunited. Mancini, by this time Italy manager, brought his old friend Vialli into the prestigious post of chief delegate for the side. With the appointment coming at a time in which Vialli had been publicly battling cancer for over a year, it was a decision that greatly moved the striker. “Working with Roberto and the staff is emotional. He has said that we are becoming old but, for me, working here together will keep us all young.”

On 13 April 2020, Vialli confirmed that he had been given the all-clear from cancer after a 17th-month battle.

Mancini and Vialli did as much as anyone to shape the face of Italian football in the 1980s and 90s. Now they’re hoping that their special relationship can be the catalyst to restoring the national team to its former glory.

But whatever happens, the story of Mancini, Vialli and their near-telepathic understanding on the pitch will live long in the memory.