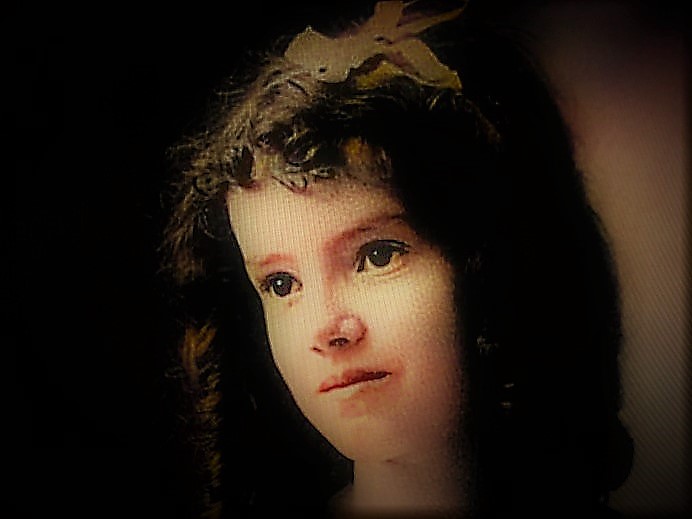 The riverboat captain is a storyteller, and Captain Don Sanders will be sharing the stories of his long association with the river — from discovery to a way of love and life. This a part of a long and continuing story.

On the morning of the 13th of May, 1911, the magnolias were yet to bloom in the yard on North Union Street, although the mocking birds chattered among their branches. In her bedroom on the second floor of the stately brick home, lovely 21-year-old Kate Schwartz brushed the last tangles from her long red locks. She eagerly anticipated the arrival of this Saturday ever since her betrothed, Mr. Charles P. West, invited another young couple for an outing on the Mississippi River at the foot of Silver Street, below the loess bluffs at old Natchez-Under-the-Hill. 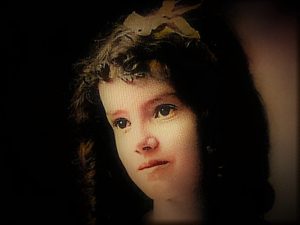 On the morning of the 13th of May, 1911, lovely twenty-one-year-old Kate Schwartz brushed the last tangles from her long red locks.

In the days before electronic entertainment and the abundance of motor vehicles ready to whisk restless youths miles from home, rivers were a primary source of thrilling amusement and social enjoyment. In Natchez, Mississippi, where the Mississippi River was the main method of communication with the world beyond the isolated community, this was especially true.

As Kate hurriedly dressed and hardly touched her breakfast, her mother felt uneasy about the idea of her daughter going on the river with Charles, the handsome son of their family dentist, Dr. Thomas C. West. Although Charles would soon become her son-in-law, Mrs. Schwartz’s apprehension quickly became so distressing that she pleaded with her daughter to stay home and away from the great river that gave life and livelihood to the city. But Kate would hear none of her mother’s pleas, so as soon as Charles knocked on the front door, Kate bounded out the portal for the short walk to Silver Street arm-in-arm with her affianced inamorato.

Atop the steep, clay loess bluff on which Natchez-on-the-Hill stood for nearly 200 years, another young couple awaited their arrival. From where they met, Silver Street, the only road going to the river from atop the bluff, was originally a trail carved into the clay by the Spaniards when the flag of Spain waved over the city. Across South Broadway Street, which ran parallel to the river atop the escarpment, was the three-story Swiss chalet home of the J. B. O’Brien family. They were the proprietors of a prosperous coal business which supplied the fossil fuel to the community, and most profitably, to the many steamboats poking alongside the O’Brien fuel flats hungry for the black gold. 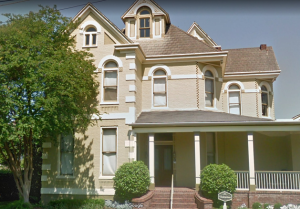 Beneath the loess cliffs, on the swift currents of the Mississippi River, the O’Brien fleet of wooden coal barges covered most of the waterfront flowing past Natchez-Under-the-Hill. Still, plenty of room remained between the barges and the shore for many skiffs, jonboats, and other tiny watercraft on which others from the city frolicked upon the water.

The other couple accompanying Kate and Charles were undoubtedly close friends of theirs. The other young woman was a school teacher from a nearby city who moved to Natchez soon after receiving her teaching certificate. Her date, a fellow by the name of “Lenough,” was tall and lanky with long arms that would prove their benefit later in the day.

It wasn’t long before the two happy couples boarded a “tender” wooden boat. Perhaps a livery rented them and did a brisk business during the seasons when frolicking on the Mississippi River was a favorite pastime for the folks who followed Silver Street to the water. We can only imagine that Kate, Charles West, Mr. Lenough, and his date were having an incredible adventure until the moment something went suddenly wrong.

What happened at that moment? From what I uncovered when I lived in Natchez in the early 1990s and began exploring the fate of the lovely Kate and her friends, somehow, the small craft overturned throwing the couples into the swift current of the muddy Mississippi River. An eyewitness watching the horror from ashore reported seeing the long, red tresses of Miss Schwartz floating atop the murky water. As the witness stared at the terrible

sight, the red ringlets slowly slipped below the surface, and Kate Schwartz was no more among the living. 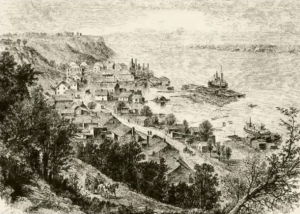 Silver Street, the only road going to the river from atop the bluff, was originally a trail carved into the clay by the Spaniards when the flag of Spain waved over the city.

Charles West and the school teacher also disappeared beneath the maul of the Mississippi. The lanky, long-armed Mr. Lenough, however, found a grip on a deeply-loaded coal flat and was able to hang on tightly until he was pulled from the river and survived. During my investigation into the tragedy, I interviewed the son of the only survivor. He gave me much information that I recorded in a notebook that remains tucked away somewhere at this time. In the booklet, I have the name of the unfortunate teacher and where she lived. I also visited the train station in her nearby hometown after her body was eventually recovered and sent home to her grieving family for burial.

The Schwartz family was of the merchant class in Old Natchez. Kate’s grandfather, J. C. Schwartz, owned a hardware establishment on Main Street where his son, Kate’s father, keep account of the company books. So when news of the horrid happenings on the waterfront spread, the word flew throughout the community with nearly the same startling impact as had the Great Natchez Tornado of May 1840. The townsfolk were thunderstruck. Mrs. Schwartz lay especially grieved, blaming herself for not preventing her precious daughter’s departure from home after the older Schwartz woman’s best mothering instincts warned her of impending doom. 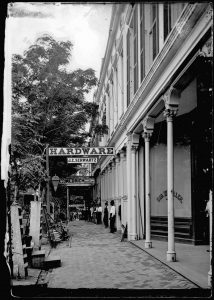 At least three miserable days passed before the river gave up its victims one-by-one. As Kate and Charles were engaged to marry that June, they were buried side-by-side in the Natchez City Cemetery, where they share a mutual marble marker above their graves. Carved into the stone are these haunting words:

“Suddenly into the glory, suddenly face to face. Together past the mystic veil, into the heavenly place.”

During the year-and-a-half my family and I lived in Natchez in the early 1990s, I awaited the arrival of the first casino paddlewheeler that, although built for the town, never came in because of political thuggery on the lowest level. Having nothing more to do, I took the time to look into the story behind the tragedy I first learned of in Dr. Tom and Joan Gandy’s book, “Children of Natchez,” where I immediately fell in love with the alluring portrait of the charming Miss Schwartz.

Somewhere in the stacks of envelopes and papers from the past is my notepad, which contains more details that I have given here from memory. I apologize to the remembrance of Kate’s schoolmarm friend for not recording her name permanently within the recesses of my mind. I’ve also spelled Mr. Lenough’s incorrectly, but that is the way it sounds when pronouncing his name phonetically, I do recall. However, his son’s first name was Basil, and, coincidently, I interviewed him in the very building that once belonged to the Schwartz hardware concern.

Also, I owe Miss Kate a better story than this. Eventually, I may stumble upon my notes and finish the tale I started writing nearly 30 years ago. I hope to, anyway. 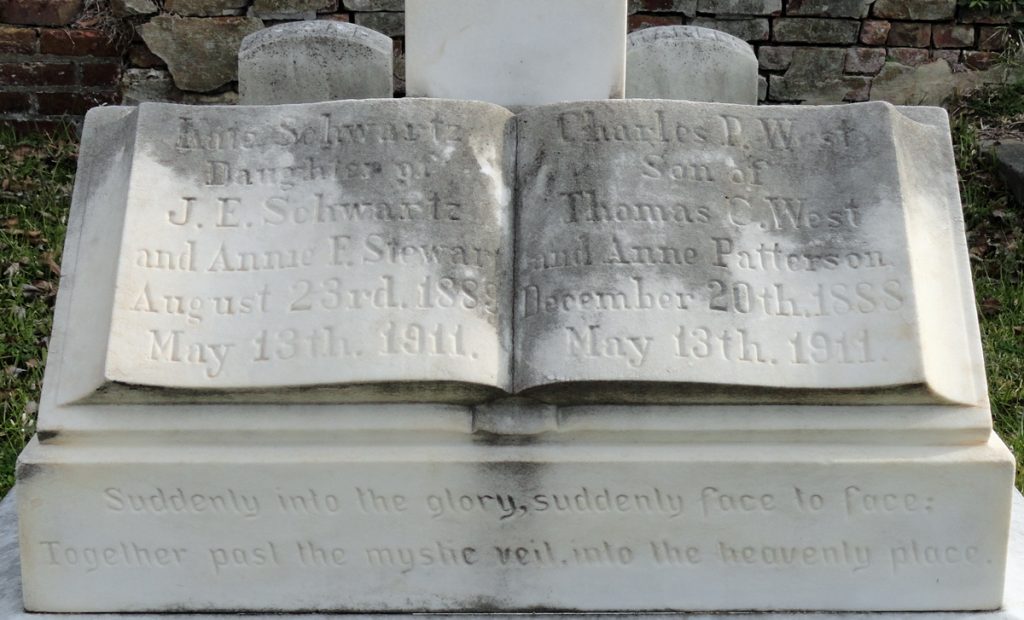 As Kate and Charles were engaged to marry that June, they were buried side-by-side in the Natchez City Cemetery, where they share a mutual marble marker above their graves.

Captain Don Sanders is a river man. He has been a riverboat captain with the Delta Queen Steamboat Company and with Rising Star Casino. He learned to fly an airplane before he learned to drive a “machine” and became a captain in the USAF. He is an adventurer, a historian, and a storyteller. Now, he is a columnist for the NKyTribune and will share his stories of growing up in Covington and his stories of the river. Hang on for the ride — the river never looked so good.