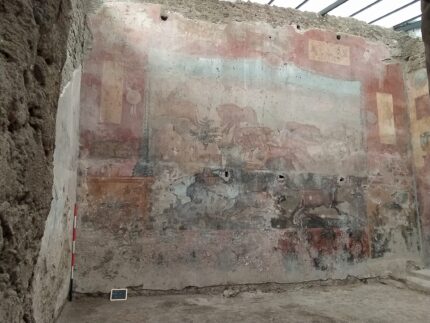 An elaborate fresco adorning a garden wall in the House of the Ceii has been restored to splendor after more than a century of deterioration caused by the elements, poor maintenance and faulty restoration techniques.

Excavated between May 1913 and August 1914, the House of the Ceii is notable as a rare surviving example of a home from the later Samnite era (2nd century B.C.). Its fine paintings were more recent additions, commissioned in the decades before the eruption of Vesuvius in 79 A.D. An electoral slogan painted on the façade promotes the campaign of Lucius Ceius Secundus for duovir (one of two judicial magistrates), and archaeologists believe he was the owner of the home when the frescoes were added to its small viridarium (pleasure garden).

On the east and west walls are Nilotic scenes — pygmies, crocodiles, hippopotami and buildings in Egyptian style on the banks of the Nile — and individual figures — one carrying a basin, one walking with a stick — in natural landscapes. The north wall, the large focal wall of the viridarium, was painted with an vivid menagerie of wild animals. Against a rocky lake landscape, animals red in tooth and claw hunt each other down: a lion chases a bull, dogs attack a boar witnessed by a second boar while two deer flee ahead of them, a leopard attacks two rams. All around this animal combat are trompe l’oeil architectural elements painted to look like marble reliefs, urns, fountains, statues with garlands forming the border. Along the bottom of all three painted walls are a profusion of greenery and birds against a deep red background. 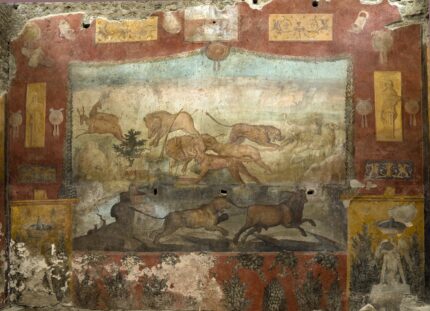 This is a fine example of the Fourth Pompeiian Style which was the dernier cri in the decade before the eruption. It featured large-scale landscapes, still lives and scenes from mythology framed in faux architectural elements with ornamental motifs. Similar scenes of wild hunts have been found in the amphitheater of Pompeii and the homes of the very wealthy. Its presence in the House of Ceii may have been an attempt to recreate the kind of wildlife parks created by Eastern kings and adopted as status symbols by the richest Romans.

The lower parts of the frescoes were particularly susceptible to damage from the capillary effect drawing water up from the ground. The moisture leaves salt deposits on the surface (efflorescence) which causes severe damage to the paint layer. Over the past year, conservators have undertaken a program of consolidation to keep as much of the paint layer attached to the backing as possible, and cleaned the deposits by both chemical and mechanical means. The most stubborn efflorescence could only be removed with a laser.

This entry was posted
on Friday, February 26th, 2021 at 11:06 PM and is filed under Ancient.
You can follow any responses to this entry through the RSS 2.0 feed.

You can skip to the end and leave a response. Pinging is currently not allowed.

‘All the Glory Belongs to God’: The Faith of the Super Bowl-Winning Philadelphia Eagles