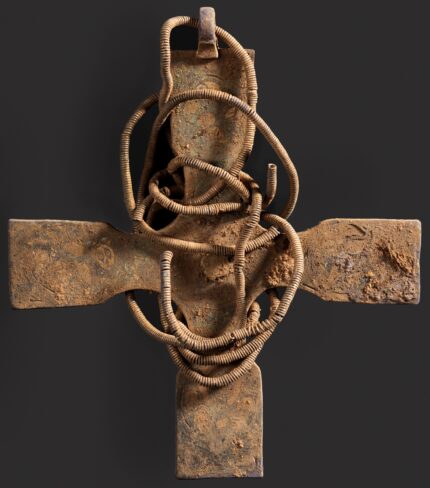 An Anglo-Saxon silver cross from the Galloway Hoard has been revealed in all its intricate glory after being cleaned and conserved by experts at the National Museums Scotland (NMS). The Greek cross is decorated with black niello enamel and gold leaf typical of Late Anglo-Saxon design. Each arm bears the symbols of the four evangelists (Matthew’s divine man, Mark’s lion, Luke’s cow, John’s eagle) with floral swirls and knotwork surrounding them. It was made in Northumbria in the late 9th century and is extremely rare. Only one other Anglo-Saxon pectoral cross from this period is known, and it is nowhere near as elaborately decorated.

“The cleaning has revealed that the cross, made in the 9th century, [has] a late Anglo-Saxon style of decoration.This looks like the type of thing that would be commissioned at the highest levels of society. First sons were usually kings and lords, second sons would become high-ranking clerics. It’s likely to come from one of these aristocratic families.”

The pectoral cross has survived with its intricate spiral chain, from which it would have been suspended from the neck, displayed across the chest. The chain shows that the cross was worn.

[Dr Martin Goldberg, NMS principal curator of early medieval and Viking collections,] said: “You could almost imagine someone taking it off their neck and wrapping the chain around it to bury it in the ground. It has that kind of personal touch.”

When the hoard was discovered in 2014, the cross was in the top layer. It was caked it dirt, as was the spiral chain wound around the junction of the bars. The thin silver wire of the chain is less than a millimeter in diameter and was coiled around an organic center. The core was preserved and analysis identified it as animal gut. Cleaning the tightly coiled spiral and the enameled grooves of the cross posed a challenge. Conservators used a porcupine quill and scalpel to remove the dirt as carefully as possible without damaging the metal. 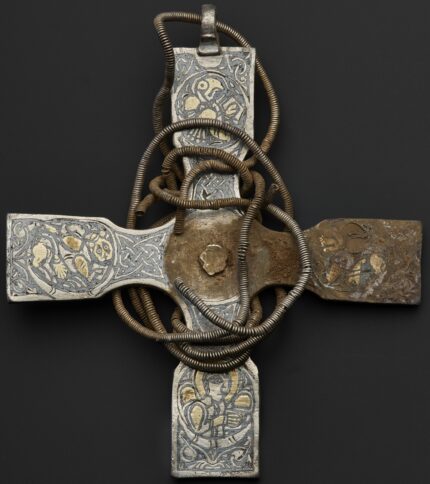 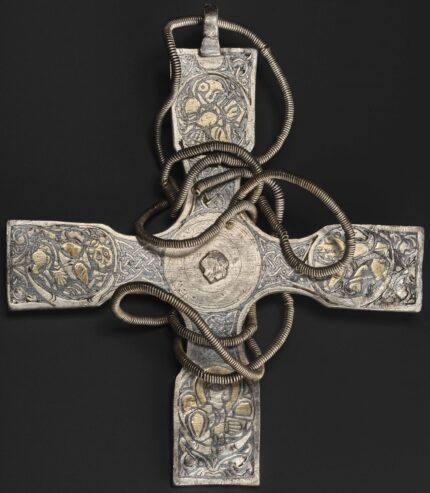 The National Museums Scotland acquired the hoard in 2017 after a successful fund-raising campaign with donations from the public, non-profit heritage organizations and the government of Scotland. Museum conservators have been working ever since then to clean and conserve the objects in the hoard — more than 100 pieces from jewelry to ingots to a Carolingian pot — and preserve its extremely rare organic elements, like the cord in the spiral chain and textiles found inside the pot.

It has been dubbed a Viking treasure — the largest Viking hoard discovered in Scotland since 1891 — but the new exhibition that opens at the National Museum of Scotland in Edinburgh on February 19th is pointedly entitled Galloway Hoard: Viking-age Treasure, emphasis on the age. The important Anglo-Saxon objects like the cross in the hoard underscore that while it was buried in the Viking era, its contents are multicultural.

Goldberg said: “At the start of the 10th century, new kingdoms were emerging in response to Viking invasions. Alfred the Great’s dynasty was laying the foundations of medieval England, and Alba, the kingdom that became medieval Scotland, is first mentioned in historical sources.

Galloway had been part of Anglo-Saxon Northumbria, said Goldberg, and was called the Saxon coast in the Irish chronicles as late as the 10th century. But this area was to become the Lordship of Galloway, named from the Gall-Gaedil, people of Scandinavian descent who spoke Gaelic and dominated the Irish Sea zone during the Viking age.

“The mixed material of the Galloway Hoard exemplifies this dynamic political and cultural environment,” Goldberg added.

This entry was posted
on Monday, December 14th, 2020 at 11:10 PM and is filed under Medieval, Museums, Treasures.
You can follow any responses to this entry through the RSS 2.0 feed.

You can skip to the end and leave a response. Pinging is currently not allowed.