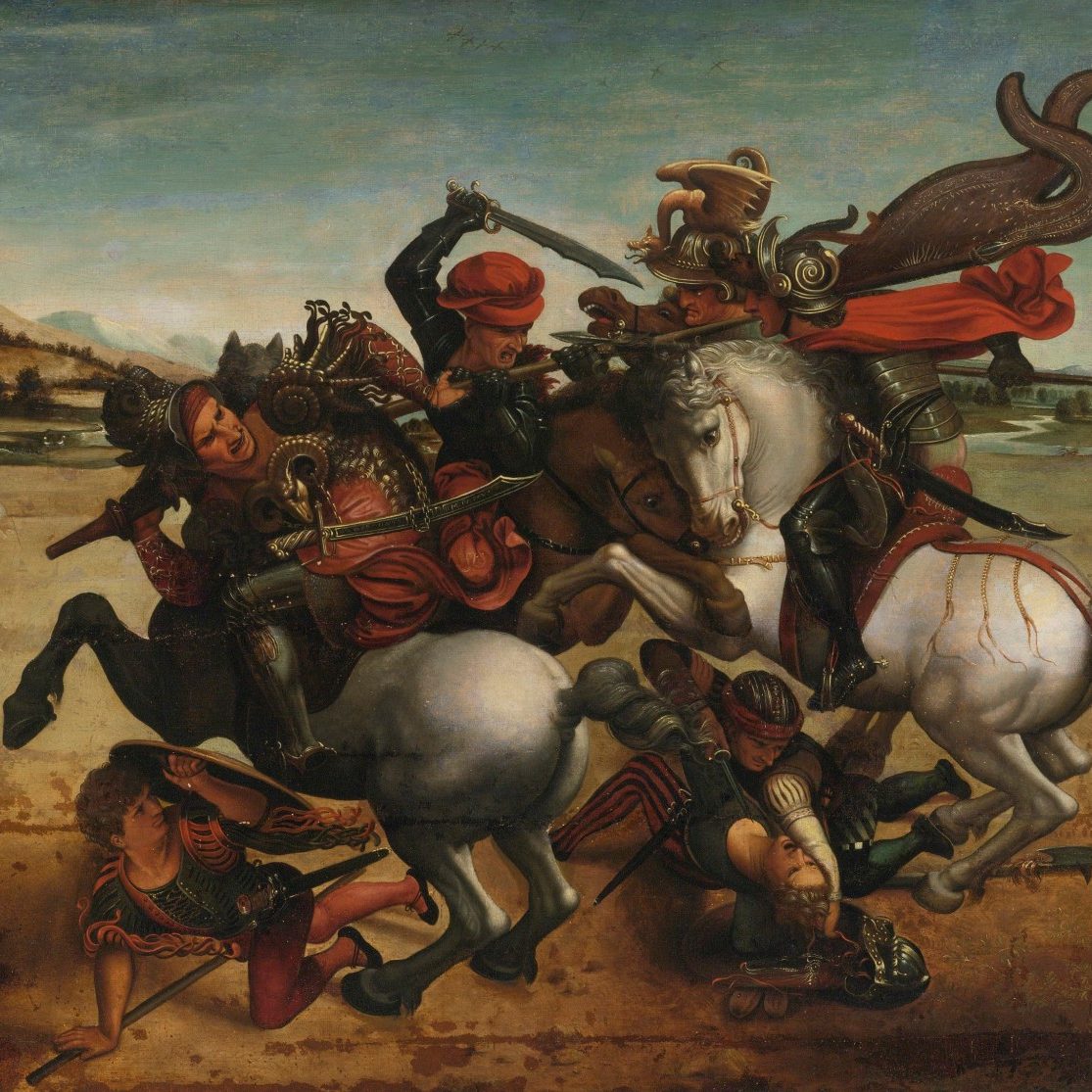 If you were to search for a microcosm of the Italian Renaissance, you could do much worse than the story of the two paintings commissioned to adorn the walls of Florence’s Palazzo Vecchio in 1504. With an eye on past and present glories of the republic, the city’s gonfaloniere Piero Soderini decided to commission two vast frescoes commemorating Florentine victories at the battles of Cascina (1364) and Anghiari (1440) – one in the eye for the rival city states of Pisa and Milan respectively. The artists chosen were Michelangelo Buonarroti and Leonardo da Vinci, men who have come to be seen as the defining geniuses of the era, and whose status, too, was meant to be another one in the eye for rival regimes. They also happened to be bitter rivals whose intense dislike for each other was well known: Michelangelo put Leonardo down in public for being unable to cast his projected bronze horse in Milan; Leonardo, more than once, wrote that Michelangelo’s trademark muscled bodies looked like “sacks of walnuts”. What could go wrong?

In the event, just about everything. Each projected his own melee of brutal combat, and then fell prey to unforeseen problems. Leonardo designed an ingenious concertina scaffolding to reach the wall, and then, despite being desperate to avoid the technical trouble he had with The Last Supper, succumbed to the same experimental urges. The combination of undercoat and oil – not normally used in wall painting – meant that the colours ran disastrously. After an attempt to dry it with hanging braziers failed to improve matters, Leonardo abandoned it altogether.

Michelangelo’s piece, meanwhile, fell victim to its own brilliance. The artist completed a full-sized cartoon of the composition so astonishing that he was promptly poached by Pope Julius II to go to Rome and design his tomb. Like Leonardo’s, the actual painting languished unfinished. Eight years later, the cartoon would be destroyed too, by another artistic rival. According to Vasari, both works, in projection at least, were indescribably wonderful; both were abandoned. All that is left of either now are a few preparatory sketches, and contemporary copies – teasing fragments of what might have been.

This was the high Renaissance all over: beautiful, bold and experimental; petty and squabbling; prone to failure. And, perhaps above all, as Catherine Fletcher argues in The Beauty and the Terror, a time when art and war went hand in hand.

Leonardo and Michelangelo’s paintings were there to glorify Florence’s martial and artistic achievements simultaneously: to tell its neighbours, rivals, envious former rulers the Medici, and even its own citizens, that it had beaten them before, and could beat them again, at whatever cost. As it happened, the ousted Medici would retake the city in 1512, be re-ousted in 1527, and re-retake it in 1531, after an 11-month siege that claimed 8,000 military and 30,000 civilian lives. Nor was it just Florence: up and down the Italian peninsula, warring city states, with the added complications of French, Habsburg and papal power plays, presided over an era that, for all its achievements, would not have been much fun to live through. While the “popular story” of the era, as Fletcher calls it, “tends to focus on the genius and the glory at the expense of the atrocities”, in reality, beauty and terror were never far away.

With this in mind, Fletcher sets out to tell “An Alternative History of the Italian Renaissance”: one that focuses as much on “war and its consequences” as on art, and as much on “colonisation and exploitation” as on cultural, technical and scientific progress. Beginning in 1492 – with the ascent of Rodrigo Borgia to the papacy, the discovery of the New World, and the first stirrings of the Italian Wars – and running up to 1571, and the epoch-defining Battle of Lepanto between the Holy League and the Ottoman Empire, it is nothing if not an ambitious programme. With the Italian Wars as a constant backdrop, the book’s 26 short chapters aim not just to cover the endless complexities of the peninsula’s conflicts as related to the broader politics of the era, but also to track the inventions, discoveries, and everyday developments of the time, and, now and then, to dip into the lives of those affected by them.

If anyone is well placed to follow through on such a project, it is Fletcher, whose expertise is enviable. The Beauty and the Terror is her fourth book on 16th-century Italy, following her well-told 2016 biography of Alessandro de’ Medici, The Black Prince of Florence, and two studies on Renaissance diplomacy, so she knows better than anyone else just how treacherous a time and place it was. At its best, The Beauty and the Terror is as enlightening as you might hope: a chapter tracing early modern ambivalence about the rise of handguns – weapons all too suited to assassination and street violence – is exactly the alternative history you might wish for, as are the sections on slavery, sexual mores and pornography.

Overall, though, it is a case of more being less. In the rush to cover as much ground as possible, chapters pass over in 10 or 15 pages material that could take up a whole book, and Fletcher struggles to bring any one thing into focus for long enough to offer any real insight. Occasionally, as in the 10 pages nominally dedicated to 80 years of “Art, Science and Reform”, it feels like a listicle.

A slightly larger problem is whether it is an “alternative” history at all. This may have more to do with publishers’ perennial desire to claim novelty where none exists, but I am not sure at this point that anyone sees the Renaissance as anything other than what it was: at least as brutal as it was brilliant. It is a point that can stand being remade, of course, but it is a push to say it is new. And nor, fundamentally, is Fletcher’s means of making it. This is a book of narrative history that, with its overwhelming focus on popes, princes and high politics, feels less alternative than resoundingly old-fashioned. The people Fletcher terms “the stars” of the Renaissance – the Borgias, Medicis, and Habsburgs; Columbus and Vespucci; Leonardo and Michelangelo – remain fascinating, but they are hardly mysterious. The tantalising glimpses Fletcher gives into life beyond the palaces left me longing for much more of the history from below: the ordinary women and men caught between opposing armies. They probably did not get to see much of the beauty, but they would have experienced almost all the terror. That is harder history to write.

The Beauty and the Terror : An Alternative History of the Italian Renaissance is published by Bodley Head at £25. To order your copy for £19.99 call 0844 871 1514 or visit the Telegraph Bookshop