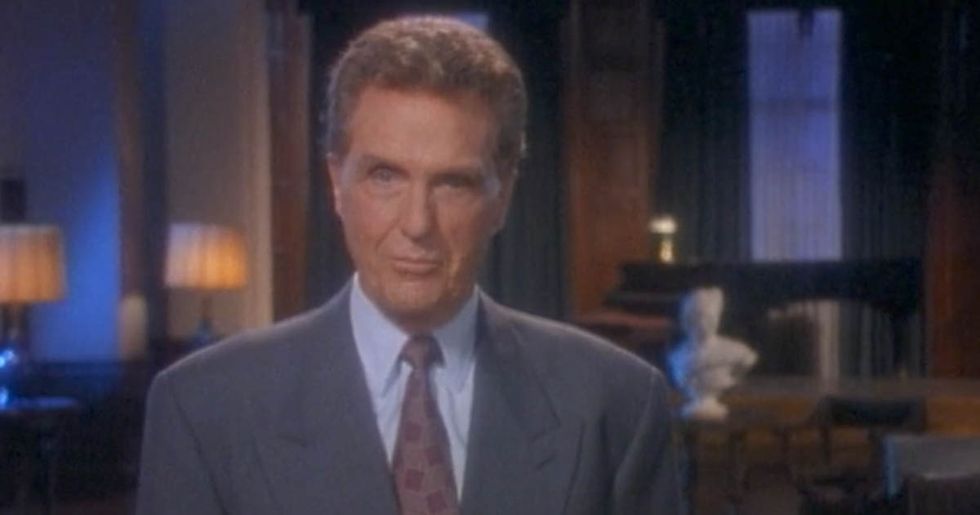 Anyone over the age of 25 was likely forever scarred by the combination of a creepy TV theme song and the voice of a classic film actor telling us about how we could be living our normal lives one moment, and then suddenly be abducted by aliens, shot by a stranger, or murdered by ghosts the next.

FYI I want to be portrayed by Matthew McConaughey in the reenactment of my murder.

Once you join the military, you might think you’re safe from being a walking potential story on Unsolved Mysteries. But you’d be wrong. The best you can really hope for is a quicker “update” segment.

Feel free to read this in the voice you hear in your nightmares.

In Season 3, Episode 21, Unsolved Mysteries showed the story of Lt. Paul Whipkey, a promising young officer whose health was affected by the atomic testing projects he worked on. One day, he decided to drive to Monterey, Calif., just one mile from his base at Fort Ord. He disappeared and was never seen again.

His car was found abandoned in the middle of Death Valley. The Army says he was stressed about his assignment so he left the car and walked into the desert, where he likely died. His family and friends obviously take exception to this theory for a number of reasons.

First, the Army declared him a deserter and didn’t even begin searching for him or his body for eight months. His commander remembered Lt. Whipkey talking with plainclothes officials. The men had IDs but did not show which agency they represented. Whipkey then alluded to a career move, where he would “make a name for himself,” just before he disappeared.

Just 11 days later, Whipkey’s best friend Lt. Charlie Guess died in a plane crash, where his remains were found among plane wreckage different from the tail number of the plane he took off in.

Whipkey’s car was seen by locals after his disappearance, but it was driven by a man in uniform, which Whipkey was not wearing when he left the base. And next to the car was found was a pile of cigarette butts. Paul Whipkey did not smoke.

But the private that “hid” his car did. Like a chimney.

His family and friends believe Paul was recruited by the CIA to go one secret operations and that he likely died in the CIA’s service.

This one was a pretty straightforward case, but when it first aired on the sixth episode of Unsolved Mysteries‘ seventh season, former USAF Tech. Sgt. Edward Zakzrewski was featured as a fugitive, wanted for the murder of his wife and two kids.

A former subordinate of Zakzrewski’s who served with him at Kunsan, called him “A cool dude, but a little odd. Not ‘murder your family’ kind of odd, just like a stoner or something.”

Zakzrewski and his wife were living in Fort Walton Beach, Fla. when she was found murdered to death on June 13, 1994 (according the the show, she was stabbed but the newspapers say she was bludgeoned with a crowbar). The two had been having marital problems and she was planning to leave him.

This story was creepy as hell when it first aired, but…

He fled to Hawaii and turned himself in after the family he was staying saw his story the night it aired. As of 2016 he’s been on death row for 20 years.

In season 7, episode 19, Unsolved Mysteries told us about Justin Bergwinkel, who went AWOL from the Army and was never seen again. He began language training for the Army Rangers, but washed out of the program before being sent to Fort Ord, California, where he became a cook.

He began dating a local student, Iolanda Antunes, and all seemed well for the most part. Until it wasn’t. He would drive to visit her but would randomly say he had to return to base. Other times, he would be bizarrely secretive about a briefcase he was always carrying.

You know you messed up when Robert Stack narrated your life.

Justin was soon transferred to Washington State, but would still come visit Iolanda. After Iolanda received a strange call telling Justin “the mission is off” he suddenly went back to his duty station. Things seemed to calm down. His parents were getting calls where he claimed to be doing well and that everything was fine. I think you can guess that things were not fine.

Burgwinkel purchased two handguns at this time, along 100 rounds of ammunition. On Friday, June 4, 1993, he failed to report for duty at 0430. He was declared AWOL but was not hiding. He called his duty section from Iolanda’s apartment. He called his parents and told them he was working and not AWOL – he was doing something important.

We’re all thinking about the same thing, right? Get your hands out of your pockets?

Eight days later, he left Iolanda’s apartment and never came back. He only ever alluded to the movie White Sands, a film about gunrunning, and then disappeared. His car was abandoned at a beachfront motel near Monterrey, where it had been for three months.

The briefcase with his wallet, car keys, and military ID were found in the trunk. He did not stay at the motel.

The story of Spc. Langford was featured in Season 5, Episode 20. Langford was an MP stationed at the Redstone Arsenal in Alabama. On a pretty normal night, he was doing his usual patrol of the base when he radioed for assistance. When backup arrived, they found his radio, armband, and ID in the middle of the road. Down the street, Langford’s near-lifeless body was found outside his patrol car, shot in the head.

His hat wasn’t in his mouth, but Unsolved Mysteries says it was.

Langford’s sidearm lanyard was wrapped around his ankles, the radar cable around his neck, handcuffs on his left wrist, and his sidearm under his left shoulder. He died later that evening. The Army ruled it a suicide.

His family was outraged. Langford’s father Jim said he claimed to be doing undercover anti-drug stings for the Army. Fellow soldiers told Army criminal investigators that Chad was the ringleader of an attempt to rob the PX. The Army also maintained he was hurt about a recent breakup with his girlfriend and changed his lifestyle to fit a different narrative before taking his own life.

But his girlfriend says the breakup was initiated by Chad because his work was too much for him to share with her. When she last saw him, he was wearing different “gang-style” clothes and hanging with “unsavory” characters.

Chad’s family believes the evidence at the scene doesn’t match the Army’s story and that certain evidence, such as fingerprints and bullets to match the shell casings on the scene, was never found.

Though the Army reviewed the case after the broadcast, Chad Langford’s death remains officially a suicide.

In 1966, Corpsman Mark Dennis left Ohio for Vietnam. He thought it would be good for his future as a missionary. Dong Ha, Mark’s station, was a hotspot at the time. In July of that year, he was on a helicopter that was shot down with only three survivors. Mark was not one of them. The Navy suggested they not view his remains due to the condition of his body.

On Nov. 30, 1970, Newsweek published a photo of an unknown POW…one that looked just like Mark Dennis.

You be the judge.

But the Navy determined it was someone else, a POW already documented. When the family requested his Navy death certificate, they found that Mark’s body was the only one not positively identified because it was burned beyond recognition. It was deemed Mark though the process of elimination.

That’s when Steve Wilcox, a Navy dental tech who was friends with Mark in boot camp, told the family of a friend from Mark’s unit. This friend told Wilcox that neither his corpsman material nor his dog tags were found in the crash and that there weren’t 13 bodies recovered.

Actual photos of the helicopter crash.

The Dennis family then exhumed the body. The remains were covered by his uniform, and then a blanket. Pinned to the blanket was his dog tags, as per regulation. When his brother (a fire expert) examined the dog tag, he found them to be brand new and the burn markings inconsistent with a crash burn.

A privately-funded forensic analysis of the remains show a man five inches shorter than Mark Dennis. Furthermore, the body in the coffin was not burned by JP-4 fuel, but with regular gasoline. The family and his unit believe Mark never died that day.

Mark Dennis was not repatriated with other POWs when the war ended in 1973.

This one is the true story of William Alvarado, who was nearly killed during a hazing incident, known as a “code red” for writing a Senator about Marine misconduct. You may recognize this story from A Few Good Men, because that’s movie based on these events.

The squad leader, David Cox, was convicted only of simple assault, claiming he was following an “implied order” from a superior officer. When the movie came out, he felt he was maligned in the film – after all, in real life, no one died. He and other Marines filed a lawsuit against the filmmakers.

The Marines were understandably pissed.

As time passed, David moved in with his girlfriend and was hoping to get a job at UPS. That’s when he disappeared. One day, his girlfriend came home to find all the doors open, an uncashed paycheck in his truck, keys in the ignition, and a gun in the glove box.

Four months later, his body was found five miles from his apartment, cash and credit cards in his wallet. He was shot four times, execution style, while wearing his Marine Corps jacket (which he never wore). Investigators believe he knew his killer and went along willingly.

This is why I don’t hike.

David’s mother warned he was too outspoken about U.S. activities in Cuba, especially in his high-profile days following the release of A Few Good Men. His former defense attorney believes his murder was related to the military, given the proximity to hunting ranges (where gunshots would be normal), and his choice of military attire.

Season 8, episode 1 brought us the story of Joe O’Brien, who had a vivid dream about being held prisoner in a cold cell, with only a striped blanket. His wrists were in terrible pain and even when he woke up, he found his hands sore and red.

Joe couldn’t even pick up a coffee cup the next day.

Joe was worried about his friend Mohammed “Sammy” Mubarak, a Kuwaiti fighter pilot who was fighting in Operation Desert Storm. In the weeks following his vivid dream, Iraq surrendered.

Sammy came to visit Joe over Christmas the following year. Joe told Sammy of his strange dream and how the pain stayed with him for so long. Sammy told Joe his dream was Sammy’s reality – Sammy was held prisoner by the Iraqis on the same day.

The handcuffs cut his wrists and made them bleed for five days.

Everything Joe saw in his dream, from the hand pain to the pattern of the blanket, was what Sammy lived as a POW.