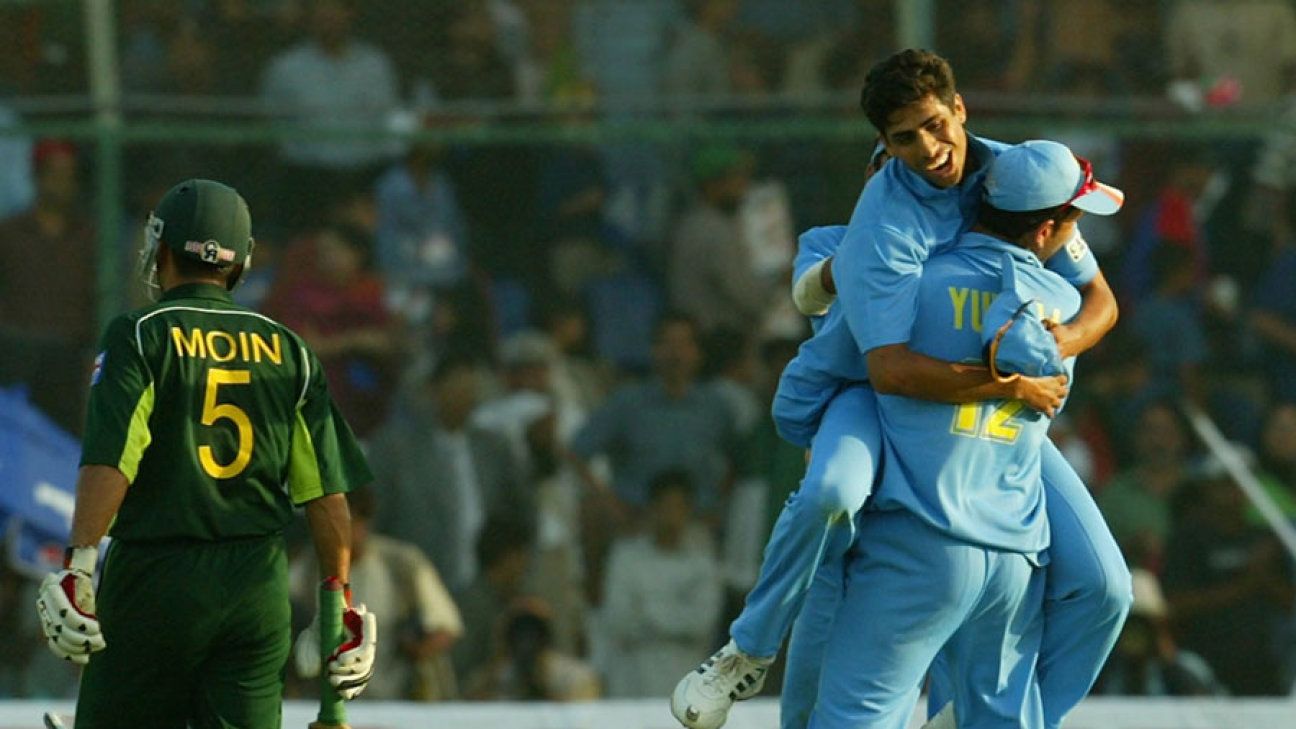 India v Pakistan is one the great rivalries in world cricket and not only because the two teams don’t play each other often enough. Here, we look back at ten of the greatest ODIs contests between the two sides.

India won by 38 runs
India had just beaten Pakistan comfortably in the final of the Benson & Hedges World Championship of Cricket in Australia, and one-day cricket was beginning to replace Test cricket as the most popular format. That’s when we got this magical low-scoring contest – with a match aggregate of 212 runs – in a tournament also featuring Australia and England, held in a shiny new part of the world. Imran Khan took 6 for 14 to bowl India out for just 125, but then Kapil Dev and the mesmerising L Sivaramakrishnan ripped through Pakistan, who lost their last four wickets for two runs to finish with 87. It left us stunned….

Pakistan won by one wicket
… till we got Javed Miandad and that six! India and Pakistan met in the the final of a five-team tournament that also featured Australia, New Zealand and Sri Lanka. Both sides scored at nearly five an over – a big deal then – with India getting half-centuries from K Srikkanth, Sunil Gavaskar and Dilip Vengsarkar. Pakistan faltered in the chase but were steadied by Javed Miandad, who made a run-a-ball century despite wickets falling around him. He brought down the equation to a boundary needed off the last ball with one wicket in hand. Chetan Sharma looked to bowl a yorker, which turned into a low full-toss that Miandad hit for six over midwicket. Miandad was already a hero. This audacious innings made him an icon, and not only for Pakistan fans.

Pakistan won by two wickets
Not to take anything away from what Miandad achieved in Sharjah, but the defining ODI innings of the ’80s for me came from Saleem Malik in a game I watched from the stands at Eden Gardens. Back then you just didn’t see batsmen score 72 runs at a strike rate of 200. Pakistan were chasing 239 in 40 overs. Malik came in at 161 for 5 and seemed to smash every single ball exactly where he wanted to. At 174 for 6, when Imran Khan fell, we started celebrating in the stands. Malik scythed us down to size with his 11 fours and a six. For me, it’s still the greatest ODI innings ever.

Tied; India won by virtue of losing fewer wickets
Those were the days when a Pakistan team could spend two months playing in India. And the days when the third ODI of a series could be played over a month after the second with three Tests filling the space in between. Pakistan had already won the first two games of the six-match series by the time the two teams met in Hyderabad. Abdul Qadir faced the last ball with Pakistan needing two to win. But after completing the first run, thus tying the scores, he attempted an impossible second and was run out. His dismissal meant Pakistan had lost seven wickets compared to India’s six, which, according to the rules for that series, gave India the win. Pakistan eventually won

India won by 39 runs
India and Pakistan have faced off in all but one World Cup since 1992, but none of them have really been classic contests. Of the lot, this one from 1996 was the most dramatic. There was Ajay Jadeja’s exhilarating attack against Waqar Younis and the Aamer Sohail v Venkatesh Prasad face-off. It certainly was eventful and, for a while, looked like it could go either way.

Pakistan won by 35 runs
It wasn’t really much of a contest, not after Saeed Anwar’s record-setting 194, but this match remains memorable because of that innings. Anwar was the dasher-who-didn’t feel-like-one and the double-century was definitely on. What a shame that he didn’t get it when, with more than three overs left in the innings, he was caught off the top edge sweeping Sachin Tendulkar, who would go on to get that record just under 13 years later.

India won by three wickets
I pick this one over India’s win in Karachi a few months earlier because of the occasion (the decider of the Independence Cup), the drama in fading light, the record (at the time the highest ODI chase), some outstanding innings, and Hrishikesh Kanitkar’s moment of glory in the end. It had looked like Anwar and Ijaz Ahmed had batted India out of the contest, but Sourav Ganguly fought back with a century and a 179-run stand with Robin Singh, and Kanitkar sealed it with a four off the penultimate ball.

India won by five runs
This was the first match of a historic tour and it suitably set the tone for what would be a riveting series. Close to 700 runs were scored in all; Virender Sehwag and Rahul Dravid played top knocks; Inzamam-ul-Haq got a century in the chase; and some really special bowling from Zaheer Khan, L Balaji and Ashish Nehra at the death stopped Pakistan just short.

Pakistan won by one wicket
This was edge-of-the-seat stuff. India put 245 on the board and then applied the choke. Mohammad Hafeez led a professorial fightback, planned and calculated, but it needed Shahid Afridi to strut out and start biffing it around to give Pakistan the advantage. They needed ten off the last over and two typical Afridi sixes, off R Ashwin, sealed the deal.

Pakistan won by 180 runs
This one will be fresh in the memory, of course. Was it a great game? No, it was one-sided. Why was it memorable then? Firstly, because it was the Champions Trophy final and Pakistan won it despite all pre-match logic favouring India, who had dominated Pakistan in the opening game of the tournament and only lost to them twice* before in a major ICC event. More than that, though, it was memorable because of Mohammad Amir. Fakhar Zaman’s century had set up a challenging chase for India, even with their mighty batting line-up. But Amir left no room for doubt in one dizzying spell that accounted for Rohit Sharma, Virat Kohli and Shikhar Dhawan. It was a masterful display against a top-notch top order. One of the best you’ll ever see.

*04:18 GMT, April 9, 2020: It was incorrectly stated that India had only lost once to Pakistan in a major ICC event before the 2017 Champions Trophy. This has been corrected.