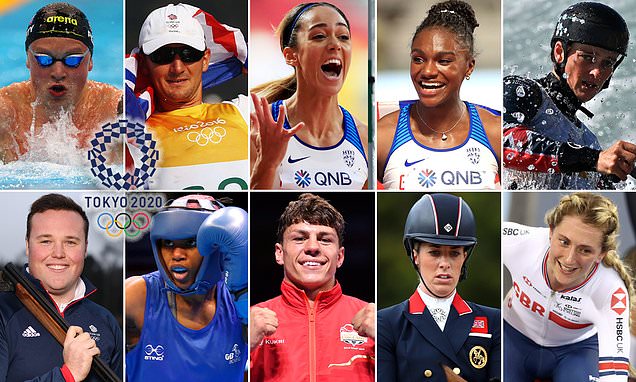 Finally, after four long years, and an extra 12 months thrown in for good measure, Team GB‘s Olympic hopefuls can start putting in the final preparations for the Tokyo Games.

For some, these last few tweaks will make all the difference in their pursuit of the ultimate goal – a gold medal.

While every athlete will have their golden dreams, some are closer to realising them than others.

Great Britain have had unparalleled success at the last two Games, racking up 29 golds at London 2012, and finishing second in the medal table in 2016 after securing 27 golds in Rio.

While expectations have been tempered by most about those feats being matched, Britain still boasts a formidable array of talent across a host of Olympic disciplines.

In 2016, Adam Peaty had an Olympics to remember in Rio. He broke the world record for the 100 metre breaststroke twice in two days on his way to winning gold in the pool – a first individual gold for a Great British male swimmer in 28 years.

Since then, he has continued to dominate over that distance, winning World Championship gold in 2017 in Budapest and in 2019 in Gwangju, but there have been challenges, too.

Peaty has opened up about the blues that came after Rio, and the depression that kicked in after a shock defeat in the 50 metre breaststroke final at the Commonwealth Games – his first loss in the event in four years.

After turning to drinking and partying, the 26-year-old now has his focus back and is arguably the country’s greatest gold medal hope in Japan.

He laid down a marker in 2019, setting a new world record with a time of 56.88secs and only last month looked in imperious form at the British Olympic selection trials.

His time of 57.39secs means he now holds each of the 20 quickest times in the history of the event.

While Peaty may dominate in the water, no man rules on it like Giles Scott.

His performance in the finn class in Rio went down in sailing folklore, securing his spot atop the podium with a day to spare.

He’ll be looking to repeat that feat in Enoshima harbour, 55 kilometres outside Tokyo, and in doing so move a step closer to imitating his rival-turned-team-mate Sir Ben Ainslie’s Olympic success.

Ainslie is one of Great Britain’s most decorated Olympians, having won four golds – one at each Games between 2000 and 2012.

Now working together for team INEOS at the Americas Cup, Scott will be hoping to tap in to some advice from his friend. Not that he’ll need much if his first Olympic showing was anything to go by.

‘In 2016, I didn’t want to be there. I hated life and was injured throughout the season,’ was Katarina Johnson Thompson’s honest assessment of her Rio experience.

Fast forward four years and her mood could not be any more contrasting.

The years in between have not been plain-sailing – there was the death of her father and the disappointment of failing to medal at the World Championships in London in 2017.

Urging herself to refocus on the sport after nearly packing it in, the Liverpudlian now resides in France, basing her training in Montpellier. It was from here that she found the level that took her to gold at the 2019 World Championships in Doha.

She did so by setting a new National Record – 6,981 points – and most impressively of all by dethroning Belgium’s Nafi Thiam.

Johnson-Thompson will have to produce something just as spectacular in Tokyo to claim gold, but their battle in the heptathlon will be one to keep an eye on.

Team GB’s poster girl for these Olympics, Dina Asher-Smith has gone from strength-to-strength over the past four years.

After a commendable fifth-place finish in Rio in the 200m, the 25-year-old has excelled in her field, culminating in World Championships success in 2019.

Her performances in Doha, both in the 100m and 200m, saw her set British National Records, making her the country’s fastest ever female.

Her elevated status has seen her become a spokesperson for women in sport, and a leading role model for younger women.

She did pull out of the indoor season earlier this year with a quad strain scare, but returned to action this month as the outdoor season, and the road to Tokyo, begins.

For all the distance that sport and the Olympics have come over recent decades, there are still reminders that equality is still having to be fought for.

Women being able to compete in C1 class in canoeing at the Olympics for the first time this year is just one such example, and Mallory Franklin is one competitor looking to prove a point.

Speaking recently to the BBC, she opened up about being laughed at during exhibition events for falling in, and being told, along with other female athletes, to avoid certain gates as they were ‘too hard’.

Nothing would hammer home the point more than claiming gold, and Franklin’s pedigree stands her in good stead.

The 26-year-old is a former gold medalist in both the World and European Championships. Adding an Olympic gold for the hat-trick is a distinct possibility.

In another life, Matthew Coward-Holley may have been more readily representing his country in Rugby Sevens at the Olympics.

Growing up, he played rugby at a high standard until an ‘almost life-changing injury’ saw him drop the ball and pick up his gun.

Already selected for Tokyo, Coward-Holley’s selection came off the back of huge success in 2019 after he became the first British shooter to ever win an individual gold at the World Championships.

Repeating his performance from that event in Lonato, Italy, would go along way to adding to Great Britain’s outstanding gold medal tally in shooting of 13.

There could  be more shooting joy too, with women’s world no 1 Seonaid McIntosh also selected.

If you think you recognise the name, you’re not mistaken. It does indeed run in the family.

Caroline Dubois, younger sister of boxing professional Daniel, may just be 20 but already she has a fine list of achievements to her name.

Already a youth Olympic champion, Dubois is also a World and European Youth champion at 60kg. She also has a BBC Young Personality of the Year title under her belt, too.

Described by BBC boxing aficionado Mike Costello as ‘the best female boxer’ he had ever seen, Dubois actually had to begin life in the ring as a male – her father introducing her at her first session in the gym as Colin, as female fighters weren’t permitted.

She had her first fight at senior level only last year – coming through the first round of her Olympic qualifying event against Ala Staradub of Belarus.

Given her young age, Dubois is undoubtedly one of the athletes that can only have gained from an extra year of preparation.

Another boxing talent, Sunderland-born Pat McCormack has already proven himself at the senior level.

Taking gold in the Commonwealth games in 2018, the 25-year-old was denied another gold in the cruellest of fashions at the World Championships a year later.

His final bout with Andrey Zamkovoy was halted due to a cut – the Belarussian winning on split decision.

Since then, McCormack has been able to take some time out of the ring, and hasn’t actually set foot in one for 18 months.

The world No 1 ranked welterweight insists the lay-off has done him good, and has him in the best possible shape to aim for the podium in Tokyo.

Let’s be honest, it’s probably going to be a little tricky for Charlotte Dujardin to top her Rio 2016 experience.

Winning gold on her much-loved horse Valegro, the celebrations included a cheeky proposal from boyfriend Dean Golding – who wore the message ‘can we get married now?’

The four years in between have seen upheaval for Dujardin, after retiring Valegro as promised after sealing her place as a triple gold-medallist.

She has attempted to hit the same heights with Mount St. John Freestyle, but with not much success barring a bronze at the World Equestrian Games in 2018.

Of late, the 35-year-old has enjoyed more success on Gio, and has now achieved the qualifying target for Tokyo after the pair triumphed in Hagen on the European dressage circuit last month.

Had the Olympics taken place on schedule, it is highly likely that Laura Kenny would never have made the trip.

‘I just thought: “I’ve had enough”. I was in so much pain,’ she revealed in a recent interview with the Guardian, talking about breaking her shoulder and then her arm at last year’s World Championships – which went undiagnosed for a week.

The fact that she is back in the saddle is testament to her own drive, and a desire to add to an already impressive haul of four Olympic gold medals, if a little unsurprising for a cyclist that has claimed top spot on the podium in every Olympic event they have ever competed in.

That total is more golds than any other woman, and just one medal in Japan would make her the country’s most decorated female Olympian.

Her husband Jason Kenny is going for a bit of history, too, as he looks to become the first Briton to win seven golds.