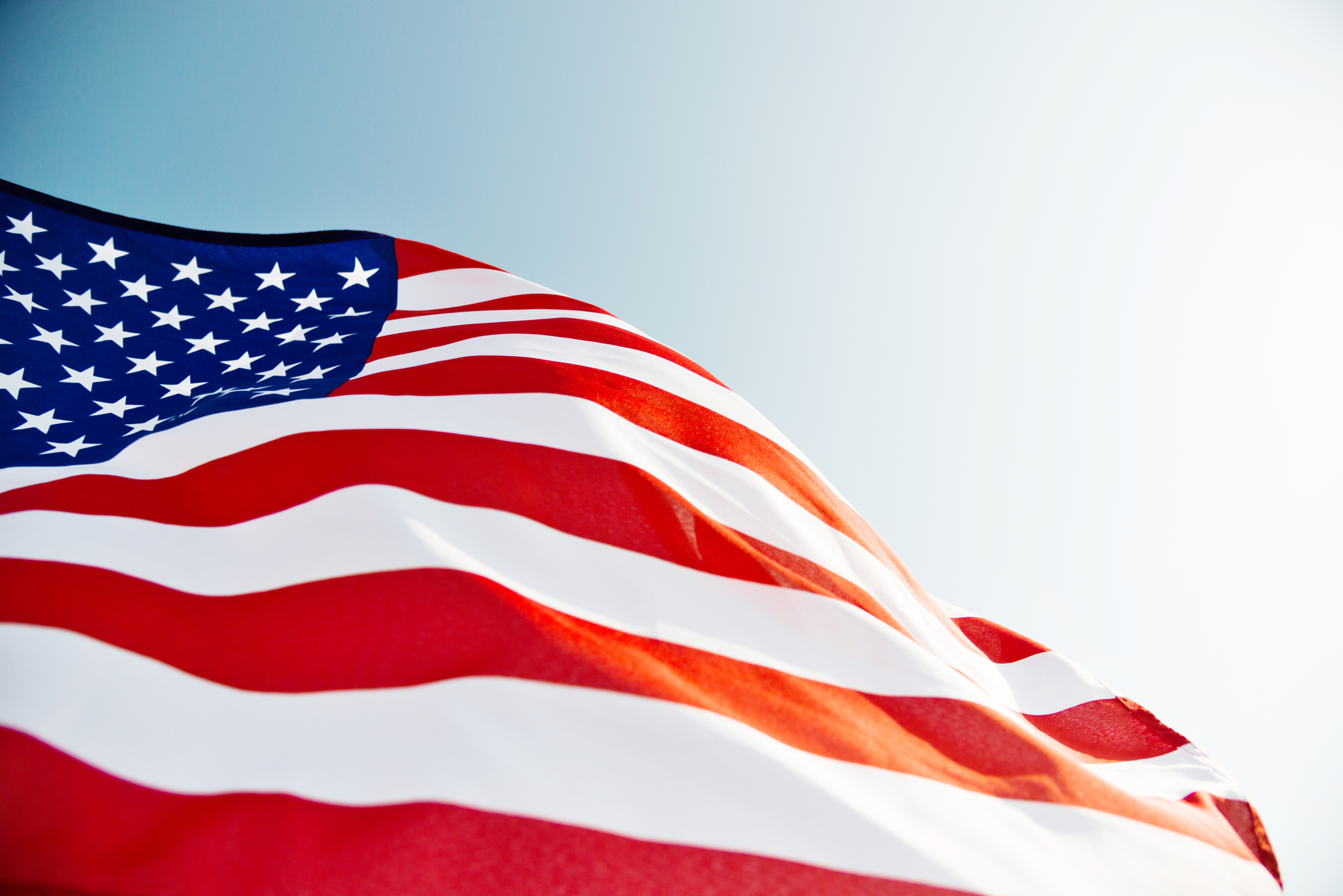 Flying from dawn’s early light to the twilight’s last gleaming, the Stars and Stripes you see this Independence Day is actually quite different from the flags our forefathers flew.

To see how the American flag has changed over time, look no farther than the Briscoe Center for American History’s Whitney Smith Flag Research Center Collection.

As a whole, the collection offers insight into the symbolism and significance of flags and heraldry, with considerable research and detailed information about the development of the U.S. and state flags. Researchers explore the origins, culture, self-image and values of a society while examining the collection’s many books, charts, pamphlets, memorabilia and, of course, flags.

Whitney Smith, for whom the collection is named, is widely recognized as the foremost expert on vexillology — a field of study he founded that focuses on flags and their historical significance. Smith has also worked as a flag consultant for hundreds of companies, has authored more than 250 Encyclopedia Britannica entries on flags and even designed the national flag of Guyana in 1966.

Smith amassed an impressive collection of flag history, prompting him to open the Flag Research Center in 1962. In the fall of 2013, the Briscoe Center acquired his collection, and a team of 12 people spent four days loading two 53-foot trailers with the memorabilia. Now, a full-time staff member is in the middle of a yearlong process of cataloging all of the collection’s pieces. The center plans to showcase the exhibit more fully in the fall.

Learn more about the Whitney Smith Flag Research Center Collection and see a slideshow of pieces from the collection.

Here’s a look at some of the Whitney Smith Flag Research Center Collection’s pieces that show the evolution of Old Glory: 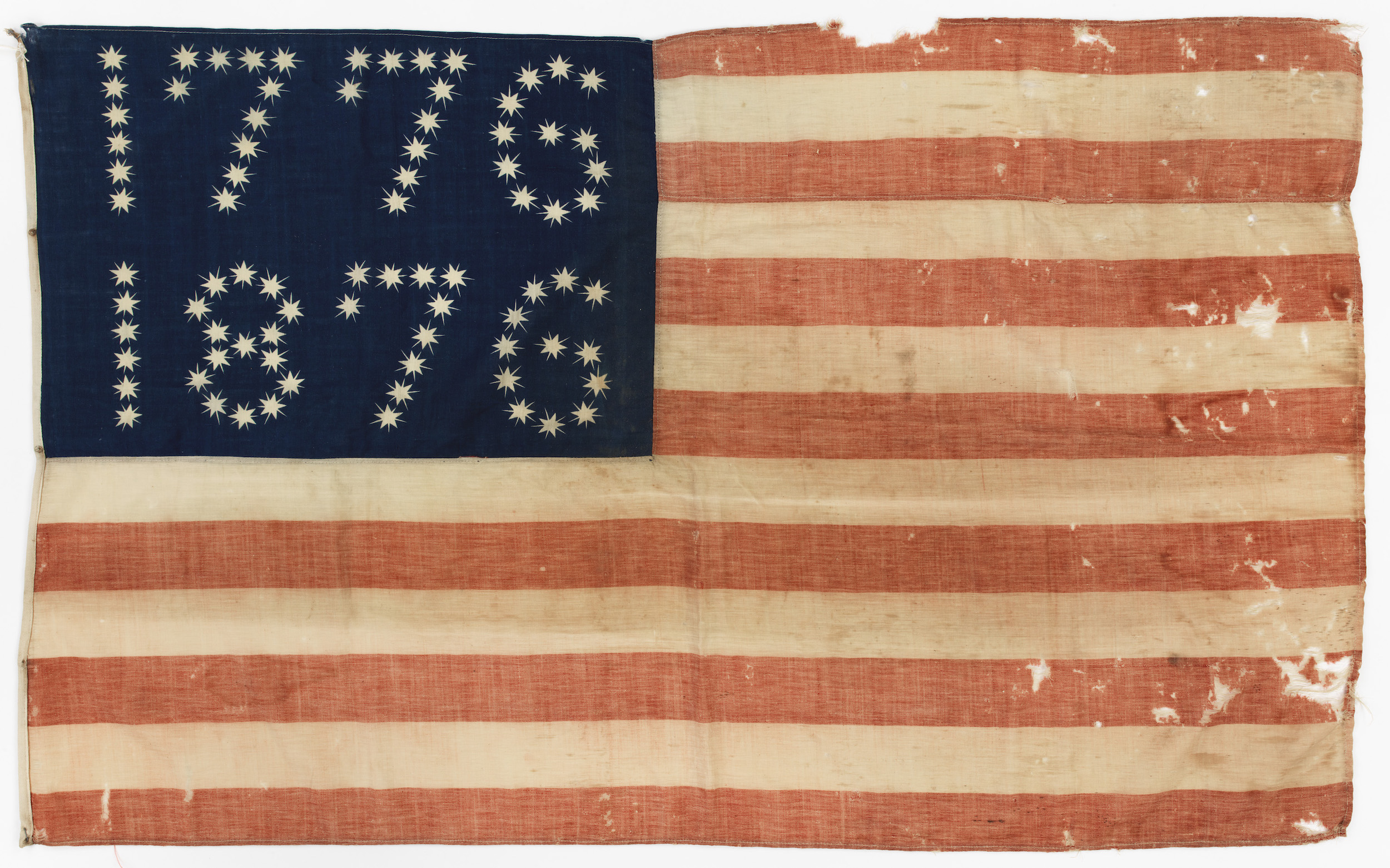 This flag (pictured above) is one of the many designs made to commemorate the Centennial Exposition in Philadelphia and the 100th anniversary of the Declaration of Independence. Star arrangements in the American flag’s canton were not standardized until 1912, so it was common practice for different businesses and organizations to arrange the stars as they seemed fit. This design of 81 five-pointed stars, each with five

white rays between the points, was the most desirable design, but only a few have survived. Though this flag was never an official flag of the U.S., it was still recognized on the U.S. Postal Service’s Stars and Stripes stamp series in 2000. 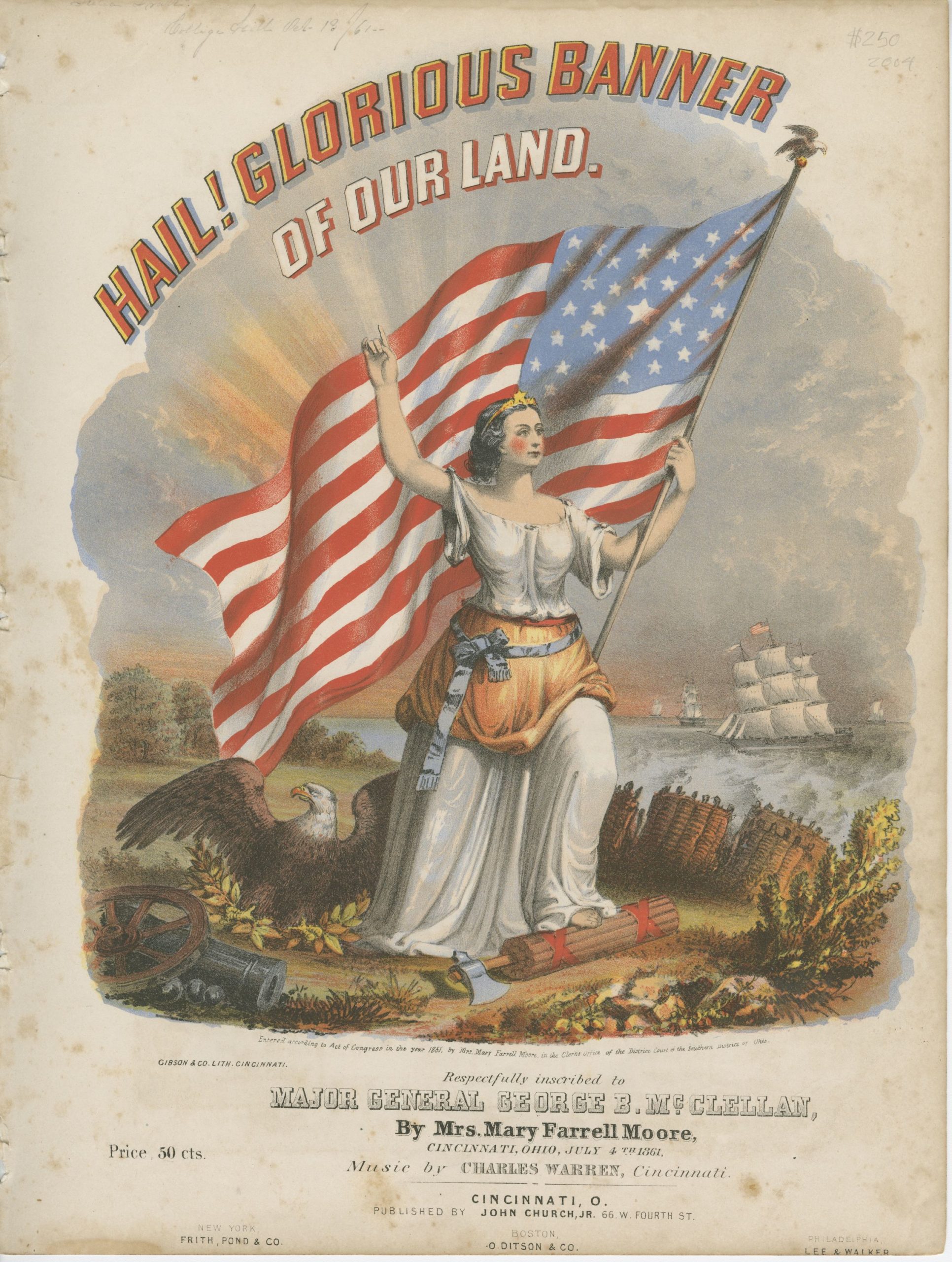 This song sheet from the Civil War era, published in 1861, is for composer Charles Warren’s “Hail! Glorious Banner of Our Land.” The flag she is holding is an example of the popular concentric circle, or New Jersey Regiment, design, which was first produced in 1861. 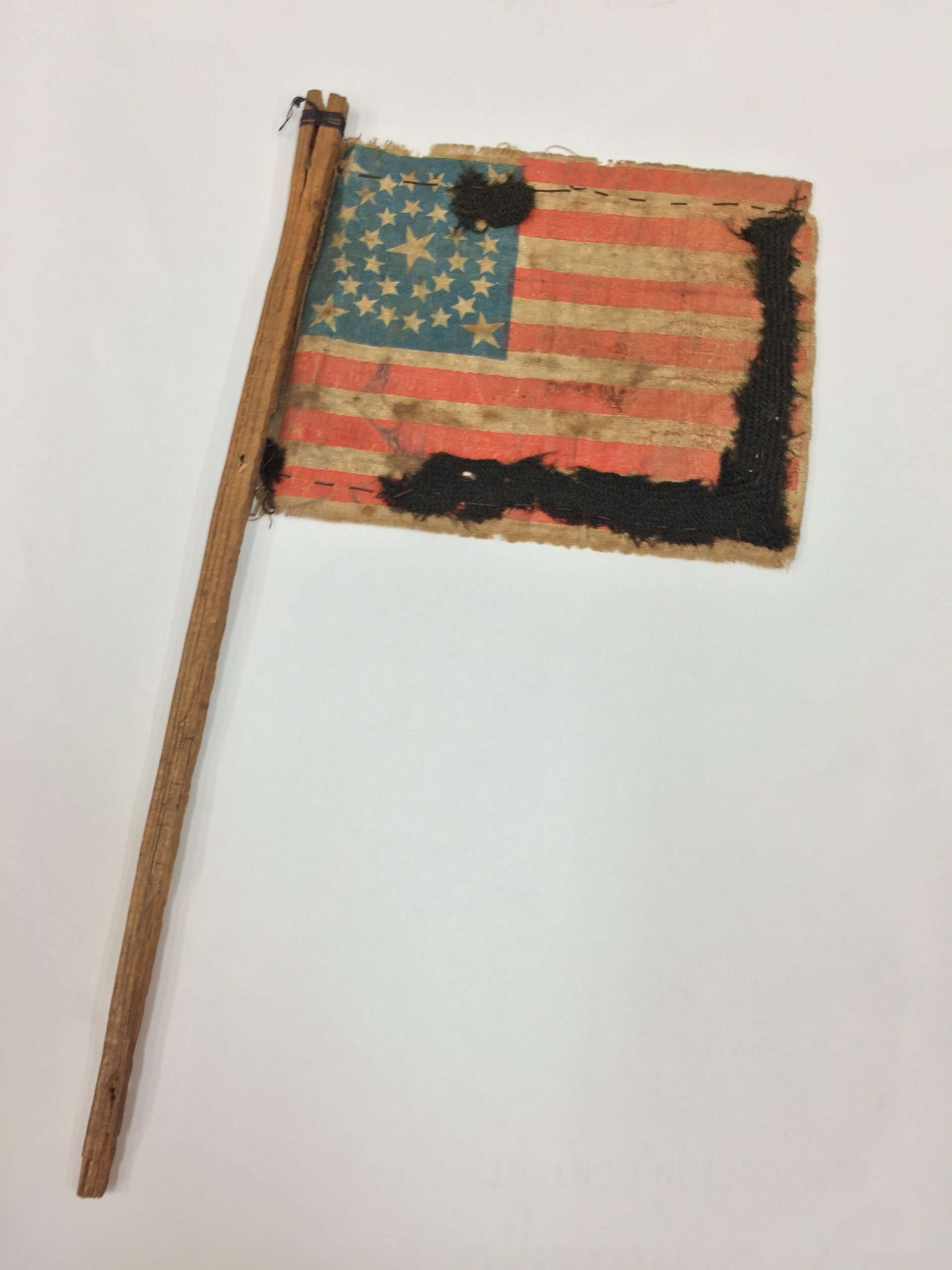 This Civil War era flag was intended to be carried during parades. The arrangement of stars on the flag became popular as the nation grew and was first manufactured in 1863 for all the Union New Jersey regiments. In 1912, President Taft issued an executive order declaring the flag’s stars must be put in rows, stopping flag designers from using a variety of star arrangements. 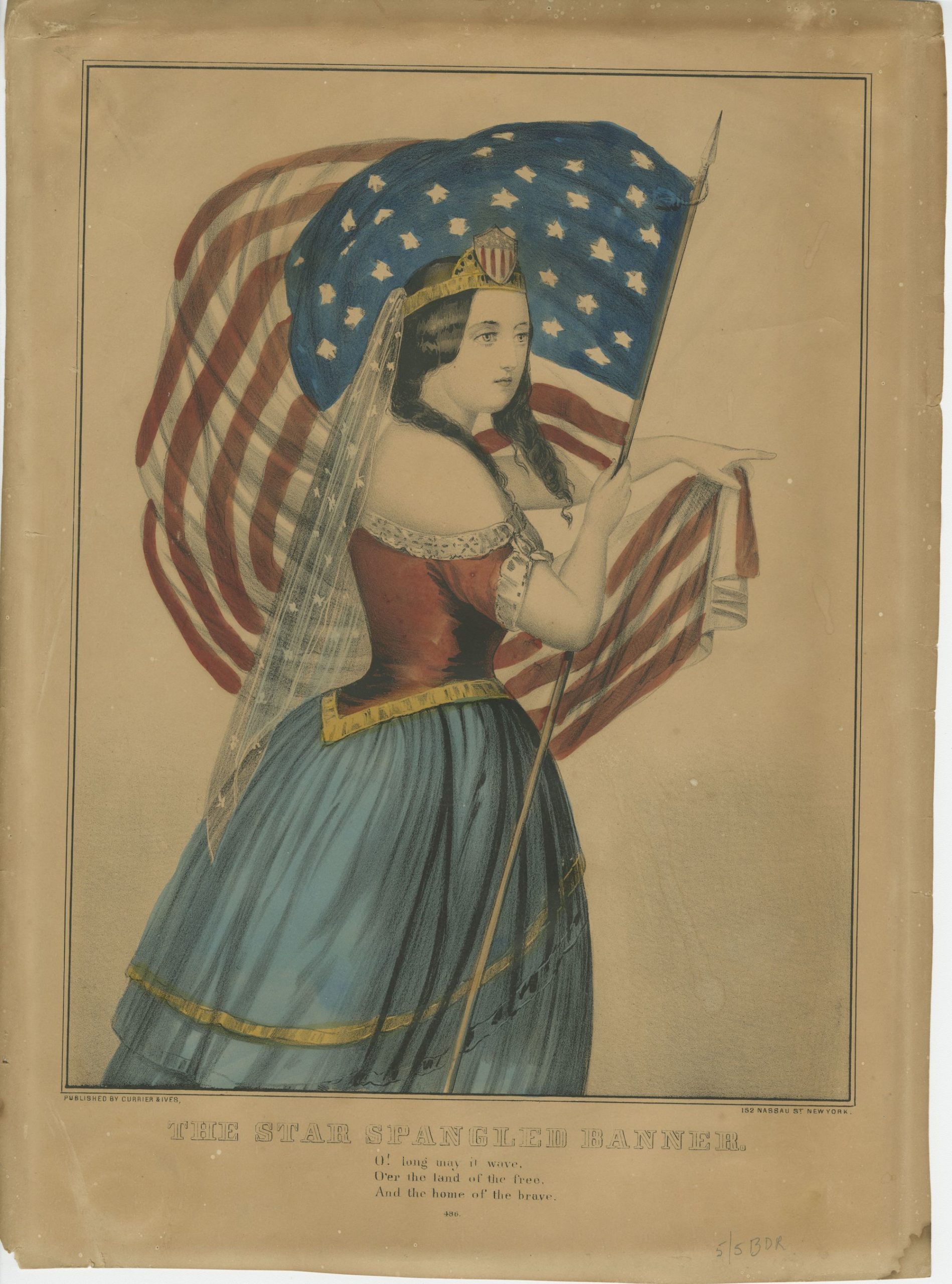 This lithograph, circa 1870, depicts two principal pillars of the American Identity: liberty, represented as Lady Liberty, and unity, represented by the Star-Spangled Banner. Similar prints have a background scene in which Lady Liberty is pointing to a fire burning in the distance, which presumably symbolizes the defense of Fort McHenry on September 13, 1814, the occasion that inspired Francis Scott Key to write “The Star-Spangled Banner.” Currier & Ives, a prolific New York firm, produced this lithograph and almost 7,500 different art prints through the 19th century until 1907. 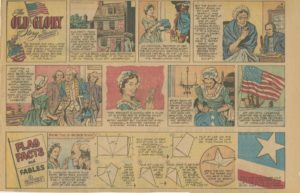 “The Old Glory Story” was a color feature comic strip that first ran in the Chicago Daily Tribune in 1954 and was syndicated around the world until 1966. This comic strip (pictured above) features the well-known legend of the first flag design by Betsy Ross. The same illustrator behind the Dick Tracy comic also drew this strip, which included educational information about the flags of the U.S. and other countries. The Briscoe collection includes a sizable run of the strips, predominately from the Los Angeles Times.

Can ‘Glory Days’ Still Find Glory at the Tonys?