The first time I met Richard Fidler was in the back of a car on the way to a winery event for the Adelaide Writers’ Week. Pretty quickly we started talking about Prague – about the books we were trying to write. Mine, about my grandparents, and Fidler’s, a sweeping biography of the city. We talked non-stop for the whole journey, and could have talked for hours more if we had had the chance. 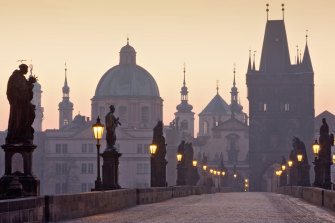 I remember thinking that trying to write a biography of a city with such a complicated history was a huge task, and I was very grateful I was only trying to write a novel [There Was Still Love] set in 1980. But I knew that if anyone could pull it off, it would be Fidler. During our conversation, his intense passion for the city was palpable. When he talks about Prague, his eyes light up and the words spill out, painting a vision of what he is describing. His is a 30-year-old love affair that is still running strong.

‘‘I first came to the city in the dizzying aftermath of that revolution [of 1989]. Prague was grimy and run down after decades of neglect, but I thought at the time it was the most beautiful and strangest city in the world and I still feel that way,’’ he said to one journalist.

I understand exactly what he means. I didn’t go back to Prague while I was writing my novel because I wanted to remember the wonder I felt that first time. That experience of discovery, of excitement, a strange feeling of coming home, because in many ways I have known Prague all of my life. But, the truth is, in many ways – we all know Prague – a city of dark fairytales and Good King Wenceslas and Golem and stone statues that come to life at night. A city active in our collective unconscious.

And a city beautifully brought to life by Fidler in The Golden Maze. One of the most moving parts of his book is the chapter set in 1990, just after the Velvet Revolution, when as a 25-year-old he shares many pilsners with a young Czech soldier well after midnight. ‘‘Jan paused for a moment, held me by the shoulders again, and repeated in a softer voice this time, ‘Please. Listen to me Richard: Australia, Czechoslovakia, America, 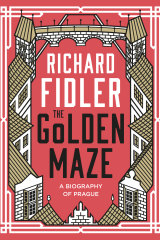 The iron doors to the Kingdom of Forgetting were finally open, and young people like that Czech soldier drinking with Fidler (and my own cousin in the city) finally felt like they could be a citizen of the world again.

Fidler’s passion and love for the ancient city infuses every word, pours off every page, and if you’ve never been interested in Prague, it will find a way into your heart after reading this book.

It’s almost impossible to sum up the whole of this biography in a short review, a book that covers an immense amount of ground – from a witch at the end of the 4th century BCE, to the Velvet Revolution at the end of 1989 – and everything in between, including two world wars and a thousand kings. But what makes this biography sing is the careful attention to particular details and stories that pull the threads of history together to weave the tapestry that is Prague.

Fidler draws us into the very atmosphere of that history – no observing from afar with dead facts and dates on a page. The times, the places and the people are vibrant, arresting and breathing. The Golden Maze gives us a brilliant living history of Prague, told through stories alive with hundreds of voices chiming in. This is the magic and power of this work.

I’ve known Prague since I was a small child because of my beloved grandma’s flat. It was Prague. And I know that if she were still alive, my grandma would put a copy of The Golden Maze on her mantelpiece, with her other treasured possessions, just under the large framed tapestry of the magical city far away – with bridges and a river and a castle and a dark sky. A city of fairytales and secrets and hope. A city that Richard Fidler captures the very essence of in his book.

‘‘Walk down from Wenceslas Square, through the Old Town, across the stone bridge, and imagine all these things vanishing behind you as you pass. Walk up the hill towards the castle. Then it too vanishes and there is nothing there, only a grassy bluff overlooking the bend of a river and a dark forest. On the headland a priestess whispers, I see a city…’’

Favel Parrett’s most recent novel, There Was Still Love (Hachette), won the Indie Book of the Year award and was shortlisted for the Stella Prize.

Most Viewed in Culture

Can Bottas maintain his momentum throughout 2020 and beat Hamilton to the championship?