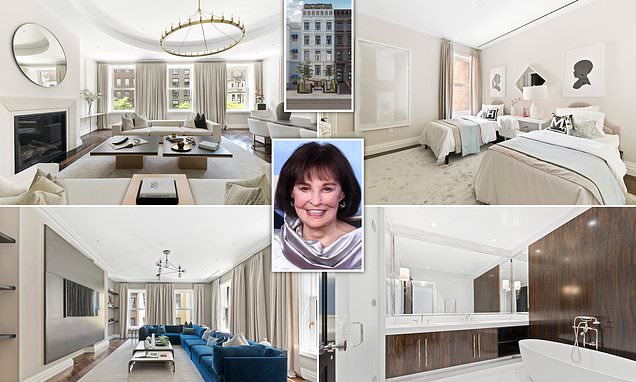 The Manhattan townhouse known as the Vanderbilt Mansion where fashion icon and actress Gloria Vanderbilt lived as a child is up for sale for $50 million.

Built in 1891, 39 East 72nd is the former home of the heiress, artist and fashion designer and the famous street is also home to a host of other celebrities.

The stunning New York City property, in one of the most prestigious areas, includes feature ceilings of up to almost 12ft high, three gas fireplaces, plus kitchens with limestone floors, Calacatta marble slab counters and marble tiled walls.

Originally built by Robert B. Lynd in 1891 and restyled in 1905 by William Strom, the neo-Grecian property, the sprawling space is 27-feet wide, seven stories tall and the living space stretches over 18,408 square feet.

The seven-story mansion was once owned by Gloria Vanderbilt’s father Reginald Claypoole Vanderbilt. Gloria lived at the home from her birth in 1924 until her father’s death the following year, when she moved to Paris

The historic Vanderbilt Mansion in Manhattan has 12 bedrooms, 11 full bathrooms and three powder rooms. It has been put on the market for $50 million

East 72nd street is home to many celebrities of the arts and fashion world. Vanderbilt Mansion also sits on the famous street and was built in 1891 by by Robert B. Lynd

The Gilded Age, neo-Grecian townhouse was modified by the architect William Strom in 1905 and comes with 12 bedrooms

Heiress Gloria Vanderbilt lived at the address, which was once owned by her father, Reginald Claypoole Vanderbilt, from her birth in 1924 until her father’s death the following year, when she moved to Paris.

The building is currently divided into three luxury condominiums. The $25 million penthouse where Vanderbilt lived takes up the fifth, sixth and seventh floors, a maisonette is listed for $11.5 million and a four-bedroom, 5,000-square-foot duplex is selling for $13.5 million, according to Architectural Digest.

Additionally, the building has a large central elevator in addition to individual private elevators within each residence.

The sandstone mansion on the Upper East Side was ranked as the most expensive new listing on realtor.com in late July.

The luxury residence features ceilings up to almost 12 feet, three gas fireplaces and stunning finishes. Pictured is one of the living rooms

Gloria Vanderbilt with one of her sons Anderson Cooper. After she died in June she left the majority of her estate to him

Five years ago, a developer purchased the plush property for $19 million in order to convert the building into three modern and luxurious apartments

floors with free-standing tubs in some of the bathrooms

The property was split into a $25 million penthouse where Vanderbilt lived that takes up the fifth, sixth and seventh floors, a maisonette is listed for $11.5 million and a four-bedroom, 5,000-square-foot duplex is selling for $13.5 million

Listing agent Lauren Muss of Douglas Elliman Real Estate told realtor.com said: ‘It’s a rare opportunity to acquire a 27-foot-wide trophy home with a rich history that has been completely renovated. This is truly a trophy property.’

Gloria Vanderbilt, who is the mother of CNN anchor Anderson Cooper, died in June after a short battle with stomach cancer and left the majority of her estate to him.

Vanderbilt was an iconic New York socialite from one of America’s Gilded Age families.

Led by Cornelius ‘Commodore’ Vanderbilt, the Dutch family lived opulently from money accumulated through the railroads. Cornelius Vanderbilt amassed his fortune after borrowing $100 to begin ferrying passengers from Long Island to Manhattan. He eventually went into the railroad business.

Aside from her dynastic family, she was known as an actress, writer, artist and fashion designer who pioneered designer jeans in the 1970s with her eponymous collection of denim.

Between raising children, Vanderbilt acted on Broadway and in films, wrote poetry and novels and produced popular art.

One of the 12 bedrooms in the sprawling seven-story townhouse known as Vanderbilt Mansion and comes with 1,500 sq ft of outdoor space

Once home to Gloria Vanderbilt, the historic townhouse was completely restored and is currently set up as three separate units

Reginald Vanderbilt with his wife and their bay daughter Gloria Morgan Vanderbilt as they returned from abroad. The family moved from the East 72nd street townhouse a year after Gloria was born

Though many of the street’s striking Gilded Age mansions have been torn down to accommodate exclusive apartment blocks, the sandstone Vanderbilt Mansion, as it is still referred to today, is a beautifully kept building

In the 1970s, she made a name for herself in the fashion industry with her line of jeans – Gloria Vanderbilt Jeans – which were emblazoned with a swan and her name.

Vanderbilt had four children from two husbands between 1941 and 1978 until the death of her fourth husband, Anderson’s father Wyatt Cooper.

East 72nd Street is home to many celebrities of the arts and fashion-design world including Yoko Ono, who still lives in the apartment she shared with John Lennon, Ralph Lauren, Leonard Bernstein, Joan Fontaine, Dorothy Parker, John Steinbeck and Margaux Hemingway.

One of the stunning property’s 11 bathrooms. It has been put on the market for $50 million after it was bought five years ago for $19m by a developer