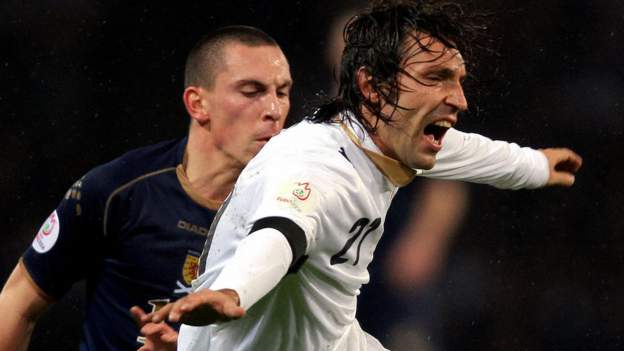 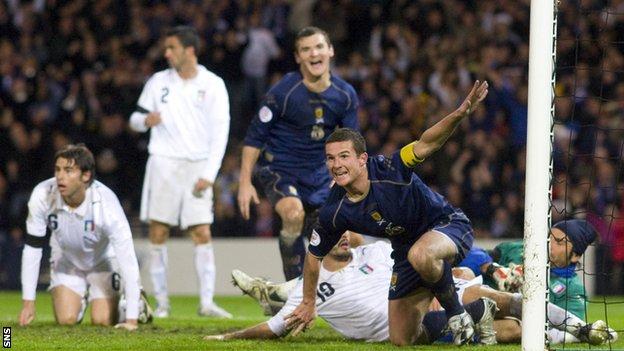 Robert Louis Stevenson once wrote that to travel in hope is better than to arrive. He must have been a member of the Tartan Army.

A downtrodden group for whom the journey with no end is all there has been for more than two decades now. But this time, right? THIS time…

The biennial start-afresh mantra renewed like clockwork since failure became a habit that couldn’t be kicked in 1999. Seven different managers, 11 campaigns, each finding a different way to break your heart.

This time, though, right? THIS time…

One game. One win over Serbia. All we need to finally lay the ghost of flops and catastrophes past to rest and qualify our men’s team for a first major finals since the 1998 World Cup.

Which won’t be easy. But at least it’ll be easier than the last time we were one win away, in 2007 when the world champions had to be beaten. And we so nearly did.

The Group of Death is every draw’s cliche, but Euro 2008’s Group B was the very definition. Scotland were fourth seeds, behind World Cup winners Italy, runners-up France, and quarter-finalists Ukraine. Lithuania, the Faroes and Georgia made up the numbers.

Incredibly, with two games left, we were in. A remarkable 24 points from 10 games, a point behind France, whom we’d beaten home and away, and a point above Italy. Four points would have done it. Three at a push. Maybe even one.

And then we went to Tbilisi. Four straight wins, including that mesmeric night in Paris, and a 17-year-old rookie in the nets at the other end. What could possibly go wrong? That 2-0 defeat left us needing to beat Italy in our last game, or at the very worst get a draw and then hope for Ukraine beating France.

David Weir: “It’s one of the best atmospheres I’ve ever played in. It was a 5 o’clock kick-off on a Saturday, plenty of drink had been taken, it was a damp night under the lights – pretty much the perfect Scottish football environment.”

Lee McCulloch: “The build-up was so different. Bagpipers seeing us on to the bus at Mar Hall. Thousands in a tent on Glasgow Green watching it on big screens. I remember a book in the dressing room full of good luck messages from bands and celebrities. It was some night.”

Gordon Smith, then Scottish FA CEO: “Qualifying is good for the national psyche for sure but from a financial point of view it’s massive, it was the best part of £10m, even back then. You need that to run every aspect of the game.”

Weir: “The Georgia game hurt us. I remember the controversy over Scott Brown and Alan Hutton pulling out – then playing the Old Firm game three days later. But world champions or not, there was no lack of confidence we could beat Italy.” 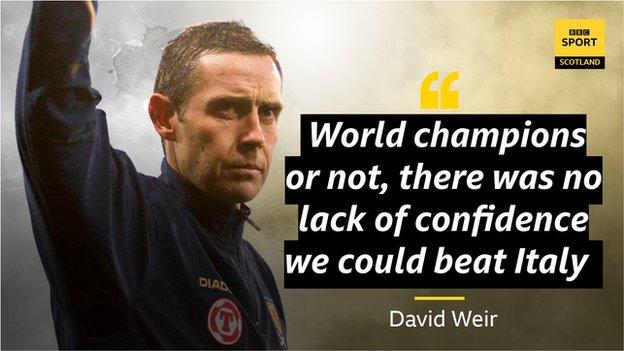 Darren Fletcher: “We had two great managers in that campaign, Walter Smith and Alex McLeish, and we had a right good side. When we were analysing teams, we weren’t giving it ‘Oh my God, how do we stop him?’ We were trusting ourselves to play man for man.”

Paul Hartley: “Italy’s midfield three – Pirlo, Gattuso and Ambrosini – had won the Champions League final against Liverpool in May. But it was also the exact same three we’d beaten six weeks earlier with Celtic.

“And Pirlo was the best I played against. Ever. Not in this game though…”

‘The ball boy was just doing his job’

Alex McLeish, manager: “They’d been told before they went out, the first few minutes are vital, manage them. The place was absolutely rocking. Jeez, it took 75 seconds for them to score…”

Weir: “It was horrible. Broony put the ball out, but we were using multi-ball and I just remember us getting caught by Zambrotta’s quick throw-in to Di Natale. He took out three bodies [Hutton, Fletcher and Brown], and I had to come across, too late, to try to stop the cutback, before Luca Toni finished it.

“Weirdly, the poor ball boy got slaughtered for giving the ball to their full-back too quickly – he was just doing his job. It would never have happened in Craig Brown’s day, right enough, he’d have had them warned as much as the players!”

‘I remember a wave of thinking we can do this’

Fletcher: “To this day, I believe we were the better team – we dominated the middle 87 minutes between their two goals!”

McLeish: “Big Davie [Weir] had one cleared off the line by Pirlo. I mean, Pirlo that night, he was anonymous – Barry Ferguson had such a stranglehold on him, he was running off him – I thought ‘Pirlo must be done!'”

Fletcher: “Alex changed the gameplan to eliminate Pirlo’s influence, it was really clever. It was the first time Barry had ever been asked to play ahead of myself and Paul and it was a surprise to us. It was a massive tactical moment in the game. He was a controlling midfielder, not the box-to-box guy, but he went and played as the 10 and was the one who ran off Pirlo. And got the goal.”

McCulloch: “I should have scored it! The ball broke from a James McFadden free-kick and fell in between my feet. I’ve just kind of stabbed at it.”

Craig Gordon: “They had Buffon in goals, the best. He doesn’t make mistakes…”

McCulloch: “Aye, he should have saved it comfortably. But he spilled it and wee Barry is on it in a flash.”

Gordon: “It was so scruffy, it turned out to be a yard offside as well. But it’s not like Italy didn’t get a break in the game, is it?”

McCulloch: “I just remember this wave going through us, thinking ‘we can do this…'”

Hartley: “Faddy’s chance. Eight minutes to go. It was a great ball across the box from Kenny Miller, the goal was begging – but he was just on the stretch, couldn’t steer it in.”

McLeish: “My whole career flashed before my eyes when Faddy slid in. They say you’ll get one chance in a game like that. That was the moment.”

Gordon: “A draw wasn’t enough, so we pushed up and left ourselves exposed. The ball came into the box but Hutts denied Chiellini brilliantly, then got bundled over by him. It was a foul all day long. Our foul. The ref gave it the other way – criminal.”

Referee Manuel Gonzalez incurs the wrath of the Scotland team

McLeish: “It was farcical. I asked Hugh Dallas [who was on Uefa’s referee committee] to find out what Uefa thought and eventually got an answer. The guy was supposed to be in the running for the Champions League semis and didn’t get one. They clearly weren’t impressed.

“People make mistakes – Barry’s goal was offside, but it was a marginal call, especially before VAR – there was nothing marginal about the Hutton decision. It was just out and out wrong.”

Weir: “Fine, it was never a foul – but ultimately you still have to defend the situation. Panucci gets the header and the disappointment should be conceding a goal from a set piece. Referees don’t put the ball in the net.”

Weir: “We were shattered. I was the only one in that squad who’d been to the World Cup in 1998, but that squad believed we’d do something special. We genuinely – as much as you ever can, being Scottish – felt optimism.”

McCulloch: “We’ve become so used to the glorious failure thing. We wanted to be the group who actually qualified. And we were good enough. That team got to 14th in the world rankings.”

Gordon: “We were all in it for each other, that was the secret to that team’s quality.

“That’s why I’m really looking forward to being part of the squad for this Serbia game. There seems to be a real feelgood factor and togetherness as a team now.”

McCulloch: “We had two managers who made you want to run through brick walls for them.

“That seems to be what Stevie Clarke has now. And you’ve got leaders like Andy Robertson, who’s achieving superhuman things but is the most down to earth guy to be around ever, and players like that when they come into a squad, that they’re part of the same thing he is.”

THE GLORIES OF MARY