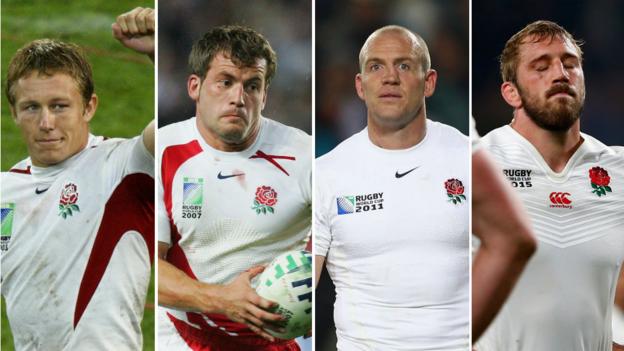 Eddie Jones will hope the only way is up because, for the past 16 years, England’s Rugby World Cup performances have been heading in the opposite direction.

This is the story of those campaigns from the men who were there.

Robinson, far right, now works for a company that produces a coconut water drink being taken to the 2019 tournament by the current England team

England’s World Cup campaign was their second trip down under of 2003.

Three months before the tournament, they had become the first England side in 30 years to beat the All Blacks on their own turf with a 15-13 victory in Wellington, before beating world champions Australia seven days later in Melbourne.

For the first time, a team other than New Zealand came to the World Cup as favourites. And the local media and public sledged away at the would-be champions.

“We got it all the time, every week,” recalls wing Jason Robinson.

“It was all sorts. ‘The white orcs on steroids.”http://www.bbc.co.uk/”The old men.’ England couldn’t play, we were boring, this that and the other.

“You always get it no matter where you go, but in Australia probably more so.”

But in the build-up to a final against the hosts, England’s supporters were just as much of a problem as their critics – with an estimated 50,000 of them descending on Sydney and turning their heroes into hotel hostages.

“That last week felt like we were in prison,” adds Robinson.

“So many fans had come over – the support was fantastic – but we were stuck in the hotel. We were looking out of the hotel windows at Manly beach, but there were thousands of supporters outside looking straight back in.

“We couldn’t go out anywhere. It was a zoo. So when it came to the game we were desperate to get into it and get it done.”

An estimated 50,000 England fans descended on Sydney for the final

And they did get it done. Robinson scored England’s only try in an extra-time victory sealed by Jonny Wilkinson’s drop-goal.

“In 2000 I had been a rugby league player, being headhunted by England coach Clive Woodward and talking about this World Cup, knowing I could be part of it,” says the 45-year-old.

“Then three years down the line, I was there in the final, scoring the try.

“No other experience in rugby can match it, and it changes a lot of things for you going forward. There are not many days when someone doesn’t tell me where they were on that day.

“You do it because you love the game, but to hear other people reminiscing about where they were makes you realise what an impact you had.”

2007 – Bickering and backs against the wall

Robinson had played his final game for club side Sale in April, five months before the start of the World Cup

“It was completely different.”

Four years on, Robinson was again in an England Rugby World Cup campaign, but in starkly contrasting circumstances.

For a start, he wasn’t supposed to be there. Two years earlier, at the age of 31, he had announced his international retirement.

But England needed him. A pitiful run of form in 2006, including eight defeats in nine Tests, had led to Andy Robinson being ejected from the head coach hot seat.

Brian Ashton, Robinson’s successor, convinced Robinson to return to the international game for one last hurrah, even if the prospects of any repeat of 2003’s run seemed distant.

“We didn’t have consistency in performance or selection, we weren’t playing well or performing individually and there was bickering within the camp – some players thought they should have been being picked and there was division between some of the squad and the coaches,” remembers Robinson.

In their second pool game, England were hammered 36-0 by South Africa seemingly confirming their status as also-rans. Robinson pulled his hamstring in the match and thought his rugby career was over.

“It was a five-week recovery time and I can remember coming off the pitch thinking: ‘Dearie me, that is it,”http://www.bbc.co.uk/” says Robinson.

“I spent some much time with Phil Pask, the physio. It was ridiculous, every half an hour we were doing something – icing, stretching, working.”

His last international game was indeed against South Africa, but as a rematch in the final, as England battled past Australia and France to earn an unlikely shot at become the first side to successfully defend the Williams Webb Ellis trophy.

The enduring image of the final was a slow-motion loop of England wing Mark Cueto’s knee brushing a sliver of whitewash, denying the underdogs a potentially crucial score early in the second half. Without it, England went down 15-6.

“Our backs had been against the wall after that first defeat by South Africa. We had been written off, but we produced the goods,” reflects Robinson.

“We all thought Cueto had gone in to be fair, but unfortunately it wasn’t to be and, if I am honest, South Africa were the better team on the day.

“But it shows you can have an ideal of the preparation, something like 2003, but sometimes determination and doggedness can get you there as well. We weren’t that far away from winning it again.”

In the aftermath of England’s quarter-final defeat by France in 2011, this website published a timeline of the various controversies that had erupted en route to the last-eight exit door.

“We had had lots of training about off-field stuff and been told of all the possible mistakes we could make,” remembers second row Louis Deacon, who now splits his time between working as forwards coach for Championship side Coventry and being commercial and partnership manager for the Matt Hampson Foundation, which supports people injured through sport.

“We were well prepared for it in that way, but I don’t think we were prepared for when it did actually happen.

“The night of the Mike Tindall incident [the centre, newly married to Zara Phillips, was filmed with his arm around another woman] other teams were doing exactly what we were doing.

“We had some time off, we had a team meal, we went for some drinks and it was just blown massively out of proportion. It was not anywhere as bad as it was made out to be in the media.

“But we were battling from then on. Coach Martin Johnson was talking more about that off-field stuff than what was going on on it.

“It was so frustrating because we couldn’t focus on the rugby. We would go out as a group for a coffee and there were photographers all round. It was difficult. We were sitting targets.”

Late tries from Ben Youngs and Chris Ashton had been needed to secure narrow wins over Argentina and Scotland respectively in the pool, but England were favourites to beat a France team who had lost to Tonga last time out and when the teams met at Twickenham seven months earlier.

After Wales’ quarter-final win over Ireland on the same side of the draw earlier in the day, Johnson’s team could see a route to the final.

“A bit of complacency settled in,” admits Deacon.

“France were in a bit of turmoil and there were stories coming out about how they had all fallen out. We read too much into what was going on and just didn’t turn up.

“I think we were looking ahead because we could have had Wales in the semi-finals, who we had already beaten in the Six Nations and in one of our two summer Test meetings.”

Shipping 16 unanswered points before the break dashed those thoughts, with France holding out for a 19-12 win.

There was still time for Manu Tuilagi to jump off the back of a ferry in Auckland harbour, earning himself a £3,000 fine and a police caution.

“It was bad timing after all that had happened previously.”

They were fourth as they got the tournament under way with a solid 35-11 win over Fiji, but there was little suggestion of the carnage to come.

“We genuinely thought we had a chance to go all the way,” recalls scrum-half Danny Care, now one of the co-hosts of BBC Radio 5 Live’s Rugby Union Weekly.

“Stuart had done a load of work behind the scenes with the squad to show how special it was to play for England, especially at a home World Cup, and there were some great moments with family members explaining what it meant to have their relatives in the team.

“With the power and support of it being a home World Cup and the players we had, we thought we could give it a good go.”

The build-up to the tournament had been dominated by Lancaster’s selection calls.

Fly-half Danny Cipriani had clashed with attack coach Mike Catt on the training ground after being told he was missing out. More controversially, Sam Burgess, a fast-tracked rugby league convert, was included at the expense of centre Luther Burrell, who had started all of England’s Six Nations matches earlier in the year. Burrell later admitted his exclusion had left him emotionally “broken”.

“It wasn’t Sam’s fault he got picked,” reflects Care. “He’s an unbelievable athlete and was never going to turn down a chance to play in a World Cup. I think everyone in the squad just felt hugely sorry for Luther Burrell for missing out.”

After a dramatic late defeat by Wales, England were comprehensively seen off by Australia in the do-or-die pool-stage match that followed.

The fallout soon followed with anonymous briefings from the camp claiming the atmosphere was too “controlling” and that assistant Andy Farrell had too much say in team tactics.

Care watched the Australia defeat from the stands, with Saracens’ Richard Wigglesworth preferred as the back-up option to Ben Youngs.

“I didn’t go into the changing room afterwards, because the rest of the squad went straight back to the hotel,” Care remembers.

“We only saw the boys when they got back. I don’t think any of us could believe it to be honest. All that hard work we’d done and we were out before we knew it.”

But there was one more match still to be played. England’s final pool game against Uruguay was now a dead rubber, with both teams already eliminated. Given his first playing time of the tournament, Care started a 60-3 win in which Nick Easter and Jack Nowell both scored hat-tricks.

“The tournament was over for me before I played a minute,” said Care.

“But I was incredibly proud to be playing my first World Cup game for England and was determined to put in a good performance. There was a fair few of us who hadn’t played at all yet, so we definitely had a point to prove.

“Now I just look back at it as the biggest opportunity missed.”

At the inaugural World Cup in 1987, England suffered a 16-3 quarter-final defeat by Wales, perhaps sparing themselves a heavier loss in the semi-finals. Eventual champions New Zealand beat Wales 49-6 in the last four.

England were joint hosts of the tournament in 1991 and came close to taking home the silverware, with Australia edging them out 12-6 in the final.

In 1995, they were trampled underfoot by New Zealand wing Jonah Lomu in the semi-finals of a tournament won by hosts South Africa.