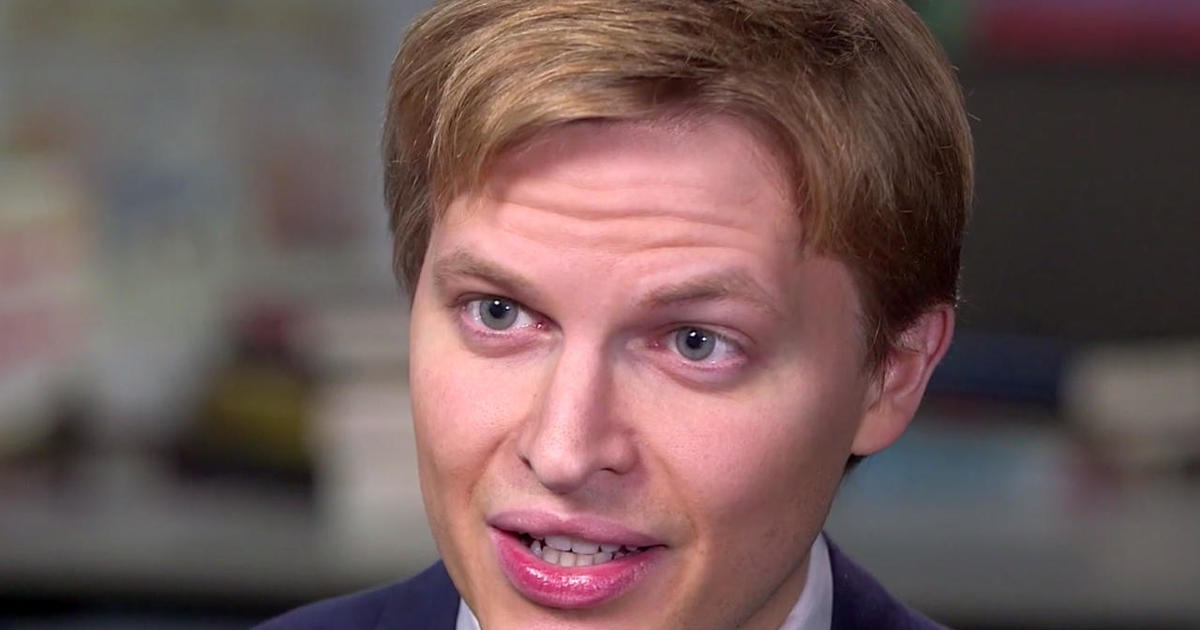 He’s the reporter who’s helped bring to light some of the charges of sexual harassment and abuse we seem to be hearing about in ever-increasing numbers. Erin Moriarty of “48 Hours” has questions for Ronan Farrow. Parental discretion is advised:

They anger us, offend us, sometimes they even make us sad: Actors, politicians, journalists, comedians accused of behavior that ranges from simply creepy to criminal.

In the case of movie mogul Harvey Weinstein, the accusations go back years, but his accusers have only come forward in the past two months. Why now? 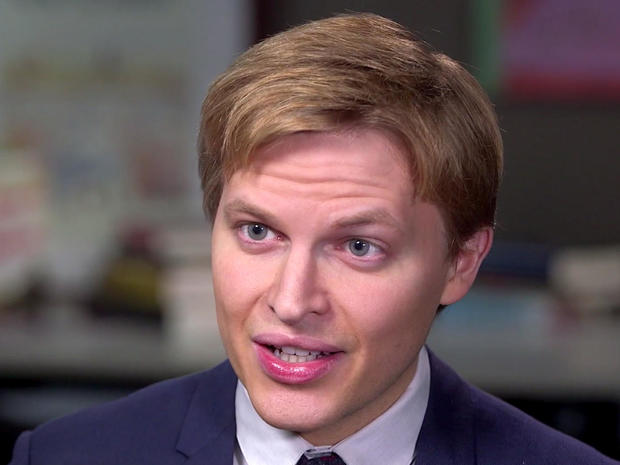 But this young reporter also played a part in what many describe as a moment of reckoning.

At 29, Farrow wasn’t even born when Weinstein is alleged to have begun sexually harassing and assaulting women. Yet he was able to stand up to the movie producer’s powerful legal and PR machine.

“When Harvey Weinstein threatened to sue me, it was like the scene in ‘Harry Potter’ where an invitation to Hogwarts is coming in through every window and fireplace and every opening in the house,” he said. 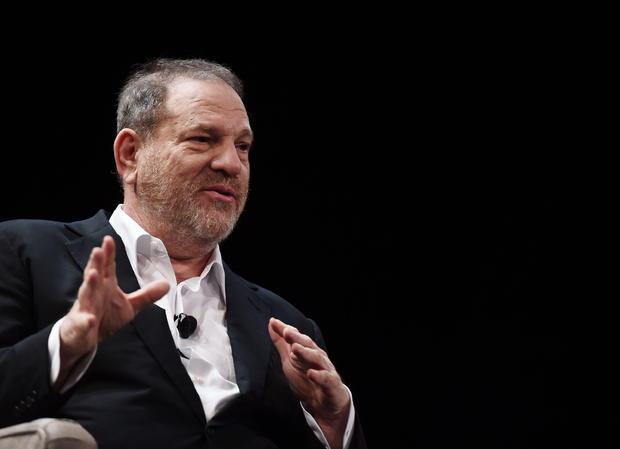 Farrow was working for NBC News when he was assigned the story. He had obtained an incriminating police recording of Harvey Weinstein with actress Ambra Gutierrez. Farrow says he also had other accusers on the record. But NBC executives said the story still needed work and decided not to proceed with it.

Moriarty asked, “There wasn’t a thought like, I should just give up on this?”

“In terms of the gravity of the evidence, it would’ve been impossible for me to live with myself or answer to any of the many women I had already interviewed if I had stopped,” Farrow said.

So Farrow went to The New Yorker magazine.

Moriarty asked David Remnick, the magazine’s editor, “So, from the moment he walked in the doors here, you were determined to get this in print?” 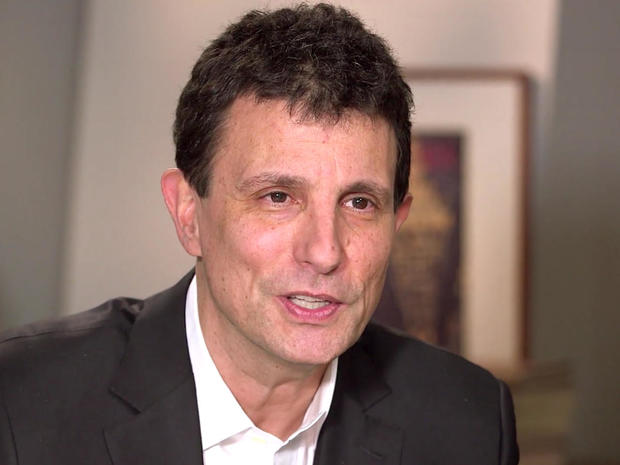 Remnick says he knew all about the claims against Weinstein. Fifteen years ago, one of his own writers, Ken Auletta, working on a profile of the movie producer, couldn’t convince accusers to go public. It was Auletta who brought Farrow to The New Yorker — and much like Auletta, Farrow had a battle on his hands.

“As once was said of Ben Bradlee, he exhibited the guts of a jewel thief,” Remnick laughed. “Not that he did any thieving; he did the work. I give him enormous credit. This is not somebody who’s been doing this for 20 years, and the stakes are high, whether it’s to the institution of The New Yorker or to his personal reputation, to say nothing of mine.”

Farrow’s first story about Weinstein, detailing allegations of sexual assault made by a dozen actresses (including Mira Sorvino and Rosanna Arquette), appeared online in early October — the same week a similar story appeared in The New York Times.

Moriarty asked, “How much did that help you, the fact that the Times came out that same week? Was there strength in numbers?”

Farrow replied, “For sure, for sure. I mean, for months I was working on this alone.”

The impact was immediate. As Oprah Winfrey said during an appearance on “CBS This Morning,” “When something this major happens, when you have the fallout, 50 women coming forward, it’s a watershed moment.”

Farrow’s follow up report was equally explosive, revealing the lengths that Weinstein would allegedly go to quash negative stories, including using private investigators and former Israeli spies to dig up dirt to discredit his accusers, as well as the journalists who told their stories.

“I don’t think most people are aware of the exotic and extreme tools at the disposal of the most powerful and wealthy men of America when they are bent at silencing accusations against them,” Farrow said.

“Do you think that there was an investigation to see if there was anything in your background or anything that could make you back off the story?” 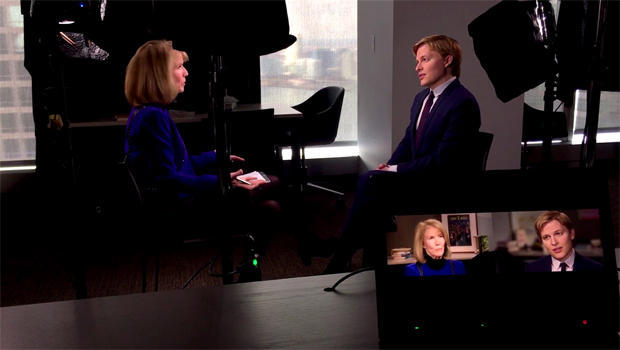 But anyone looking into Farrow’s background would quickly discover that he is not easily rattled.  He is a lawyer, was chosen a Rhodes Scholar, and maybe most important, he grew up under a media microscope as the son of actress and activist Mia Farrow.

He said, “It was perhaps an unexpected advantage in one sense that any dirt that could be uncovered on me had already lived in the tabloids for my entire life, which is a painful and unpleasant thing. But in this case, it meant that there were really no surprises to uncover when there were any efforts to discredit me.”

Farrow was born in 1987 during his mother’s long-term relationship with Woody Allen. He was four when — in the middle of his parents’ custody battle — his seven-year-old sister, Dylan, accused Allen of sexually abusing her.  After two different state investigations, Allen was never criminally charged.

“Those are painful family experiences that I, for many years, tried to outrun and avoid,” Ronan said.

“Woody Allen has always denied it, and has denied it powerfully,” Moriarty said.

“Uh-huh. Has always denied it, has gone very directly after any woman proximate to it — huge, huge public relations apparatus designed to do that.”

In 2014, Farrow’s sister, then an adult, decided to repeat her accusation against her father publicly.

“And you tried to talk her out of it?” Moriarty asked.

“I tried to talk her out of it vigorously, saying, ‘Stay quiet. You know, you’ve already lived through this trauma. Why bring it up again? Why hurt your career? Why hurt the rest of our careers?'”

“Why did she decide to go forward?”

“You know, the logic she articulated to me had a lot in common with the logic raised by women speaking out against Harvey Weinstein,” Farrow said. “She wanted to make sure that other women were protected.”

In a statement to CBS News, a representative for the filmmaker said, “[T]hese 25-year-old allegations against Woody Allen have been investigated thoroughly and repeatedly – and have consistently been found to lack any basis in fact.”

But Ronan Farrow says he now believes his sister did the right thing by speaking out. And as he interviewed women making accusations against Weinstein, he says, Dylan was on his mind.

“She made a very brave choice to go public, because she thought it could help others,” Farrow said. “And that is the same choice that each and every one of these women accusing Harvey Weinstein had to make. This was all downside for these women coming forward. There was nothing to gain, and everything to lose.”

While some women were too terrified to speak about Harvey Weinstein, others simply couldn’t. Weinstein (who denies all claims of non-consensual sex) had been paying for their silence — as much as $1 million in the case of Gutierrez, as Farrow reported this past week.

Famed lawyer Gloria Allred represents a number of women — like Mimi Haleyi, a former movie production assistant — who have gone public with accusations against Harvey Weinstein. “I’ve known about allegations against him for some time,” Allred said.

“For a significant period of time.”

But Allred admits that she’s also had clients she has advised in the past to remain silent, in exchange for money.

When asked if that is why the public did not hear of these accusations until now, Allred replied, “There is a legitimate concern, ‘Well, what about public safety? If this victim cannot speak, might he do it again, and again and again?’ On the other hand, my duty as an attorney is to my client. I will not sacrifice my client for any cause, even a cause that I believe in.”

But the days of silencing victims may be over. Harvey Weinstein — not long ago among the most powerful men in Hollywood — has lost his job, and so have more than two dozen other men accused of inappropriate workplace behavior, all because of a few dogged reporters and the women who trusted them.

But David Remnick believes this moment has been necessary:

“Harvey Weinstein himself and the allegations against him are extreme, it’s important to say that,” Remnick said. “But he’s hardly alone. And if this moment leads to a greater awareness to men, particularly men who are in positions of power and influence, to behave like human beings, then something will have happened here important.”