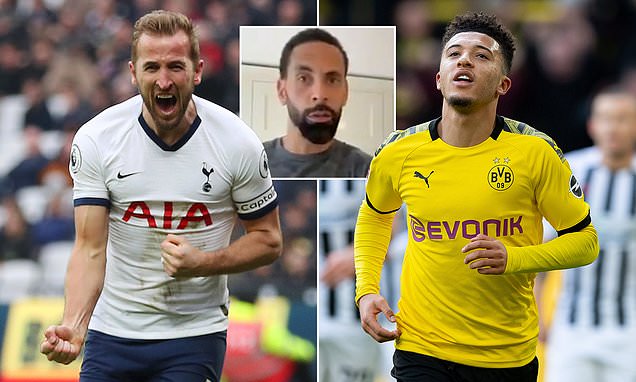 By Jeorge Bird For Mailonline

Rio Ferdinand has urged Manchester United to spend over £230million to bring in Harry Kane and Jadon Sancho this summer.

United’s squad is still in significant need of improvement and Ferdinand has identified Tottenham striker Kane and Borussia Dortmund winger Sancho as the ideal targets to pursue.

Kane recently refused to rule out leaving Tottenham if they don’t win trophies, and Ferdinand feels United would be an excellent destination for the England striker.

Speaking in an Instagram Q and A, former United defender Ferdinand said: ‘Harry has always been coy and held back but he’s dropped a couple of bombs. He’s been waiting for the dream at Spurs to materialise but it hasn’t happened. He’s frustrated.

‘Do you think Harry would be happy, fulfilled and satisfied if he scores goals, break records but with no trophies at the end of his career? No. He will be upset and devastated.

‘I think that statement means Harry is off, he wants to win trophies and that will alert clubs.

‘I know Man United will be in for him because that type of player is perfect for them. I’m sure Juventus will be in and will Real Madrid come in?

added that he wants United to sign Jadon Sancho

Ferdinand is also eager for United to bring in another England international in Sancho, who has frequently caught the eye since joining Dortmund.

Sancho is already familiar with playing with Kane and Marcus Rashford, with Ferdinand feeling that such an attacking triumvirate would help United return to their former glories.

Ferdinand added: ‘I want Jadon to go to a team where he will play, improve and get trophies. He’s been linked with United, Chelsea, PSG but I think United is the place for him to go because I’m biased.

‘(Marcus) Rashford, (Anthony) Martial, Kane, Sancho, that would intimate a lot of centre-halves before a whistle is blown. Definitely.’

Ferdinand also discussed the possibility of Sancho being given the iconic No 7 shirt at United, which has been worn by the likes of George Best, Eric Cantona, David Beckham and Cristiano Ronaldo.

Ex-England international Ferdinand admitted that signing Sancho would represent a risk given that his price tag would probably be over £100m, but insisted that such a deal is a gamble worth taking.

Ferdinand said: ‘Of course, he has to. If he wears the seven (shirt) he has to be there for the next ten years. That’s what that shirt deserves and demands.

‘He’s flying and one of the best young kids in the world at the moment. He’s a player with huge potential and will go for over £100m.

‘You are buying someone for 10 years at your club, it’s massive money but I’d take him and risk it.’

FROM STORY TO GLORY – inspirationsngr