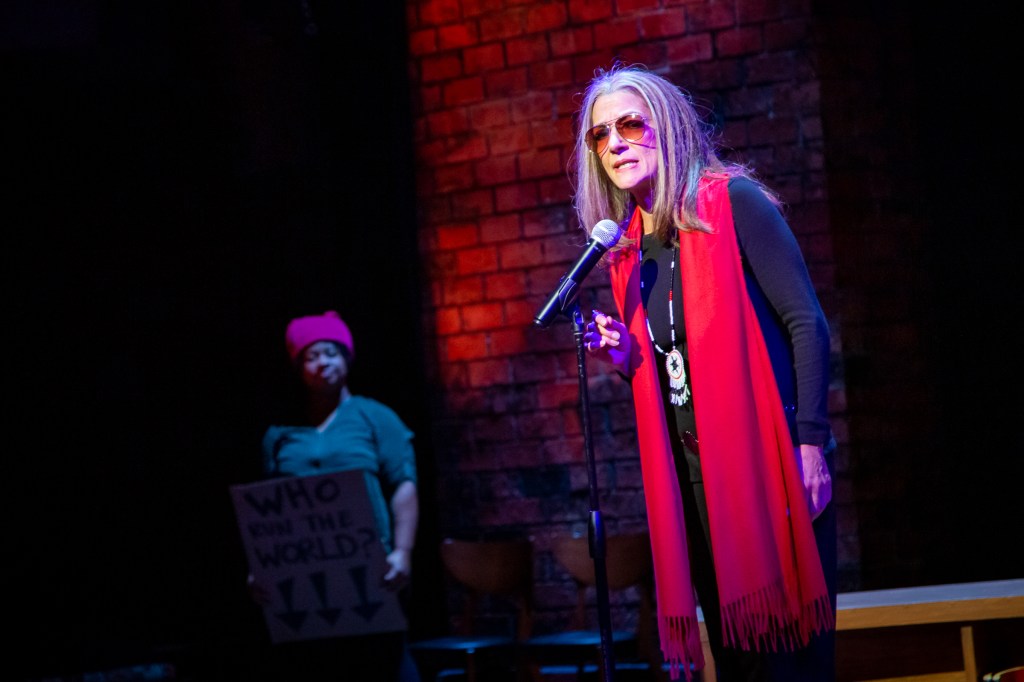 “Gloria: A Life” is a play, yes. But it’s also a political statement, a call to action, an opportunity for catharsis. And its success rests more on those latter descriptors than as captivating piece of theatrical storytelling.

Which is not to say that the life of Gloria Steinem lacks in drama. Quite the contrary. The journalist/activist/feminist icon was born into a dysfunctional family in Toledo, Ohio, in 1934. Her efforts to break through in the world of journalism were filled with colorful stories featuring even more colorful characters. Her immersion into feminist politics and publishing found her swimming in turbulent waters. And her emergence as the voice of a couple of generations of feminism is way-marked by personal sacrifice, triumph and periods of self-doubt.

Emily Mann’s script — receiving its local premiere at the History Theatre in St. Paul — is a tidy, by-the-numbers telling that would not, under any circumstances, qualify as a “warts and all” story. Mann is sympathetic — quite nearly hagiographic — working in some of her subject’s choicest quotes (“A woman without a man is like a fish without bicycle;” “The truth will set you free, but first it will piss you off.”). The story deftly cross-pollinates the personal and the political, carefully chronicling Steinem’s ideological awakening.

But it doesn’t convey that Steinem single-handedly brought feminism into contemporary consciousness. The script is scrupulous in paying homage to other pioneers — including women of color such as Dorothy Pitman Hughes, Florynce Kennedy and Wilma Mankiller — who served on multiple ideological front lines.

The structure is distinct in a couple ways. While it feels like a one-woman play in the sense that a single performer holds most of the dramatic focus, the character of Gloria is surrounded by an ensemble of six other women of diverse ages, sizes and colors who assume the personas of major and minor characters in Steinem’s life … from mentors to the anonymous Irish cab driver who quipped, “If men could get pregnant, abortion would be a sacrament.”

Charity Jones takes a no-nonsense approach to her portrayal of Steinem. While there’s a sufficient physical resemblance between actress and character (the slightly built actress wears straight, shoulder-length hair, an all-black slacks-and-sweater ensemble and — of course — Steinem’s signature tinted aviator glasses), Jones doesn’t bend over backward to capture Steinem’s carriage or mannerisms. She seems content to let the power of Steinem’s message — rather than her persona — carry the day.

RELATED: Gloria Steinem gave the homily at a Catholic church in Minneapolis in 1978. Really. Hear it here.

The supporting cast members, on the other hand, fully embrace the larger-than-life-ness of some of Steinem’s contemporaries. Dana Lee Thompson takes no prisoners as the tell-it-like-it-is Flo Kennedy and Lolly Foy’s brash Bella Abzug is as bracing as a straight shot of whiskey. Their sometimes-flamboyant rhetoric and eye for the grand gesture counterpoint what feels like a more calculated approach by Steinem, and offer hints that the women’s movement of the 1960s and ’70s was perhaps not the kumbaya-strumming sisterhood that this play often presents.

The second way in which “Gloria: A Life” strays from a conventional piece of theater comes in abbreviated second act. After a 90-minute distillation of Steinem’s life and work, the cast remains on stage for a “talking circle,” during which audience members are invited to share their own experiences as they relate to the world of the play. At the Sunday matinee I attended, nurse, legislator and former DFL gubernatorial candidate Erin Murphy kicked off the discussion; subsequent performances will feature women from the worlds of arts, activism, politics and academia.

If you have an opinion on Steinem’s place in journalistic or political history, the History Theatre production is unlikely to budge you from your spot on the ideological spectrum. Nor is it intended to: “Gloria: A Life” is a valentine to … and from … the true believers.

From purgatory to glory to life in Doha: The Ryan Bradley story