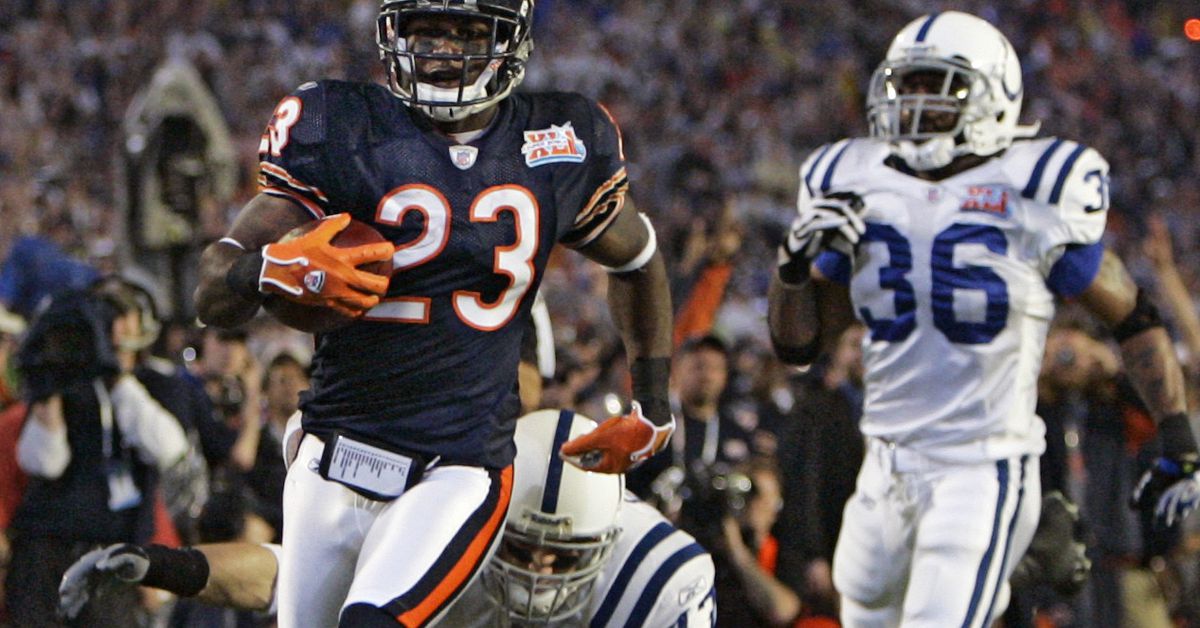 The Bears backed into the postseason after an 8-8 regular season, but this playoff berth still is something to celebrate — it’s the Bears’ first wild-card berth since 1994 and only their sixth playoff berth overall in that span. Only three other teams have fewer — the Cardinals (5), Raiders (4) and Browns (2).

Here’s a capsule look at those playoff appearances:

The Background: The Bears, coming off consecutive seasons of 4-12, 4-12, 6-10 and 5-11, parlayed a pair of fantastic finishes on safety Mike Brown’s pick-6s in overtime against the 49ers and Bengals into a 13-3 season and NFC Central title under Dick Jauron to make the playoffs for the first time in seven seasons.

Divisional game: Facing the No. 3-seed Eagles after a bye week, the No. 2-seed Bears took an early hit when quarterback Jim Miller left the game after being bull-dozed by defensive end Hugh Douglas following an interception early in the second quarter with the Bears trailing 6-0. The Bears rallied to take a 14-13 on wide receiver Ahmad Merritt’s 47-yard touchdown on an end around in the second quarter and cornerback Jerry Azumah’s 39-yard interception return for a touchdown early in the third quarter. But McNabb responded with a touchdown pass as the Eagles outscored the Bears 20-3 to take a 33-17 lead. McNabb — a former basketball star at Mount Carmel — punctuated a clinching five-yard touchdown run with 3:21 to go by slam-dunking the ball over the cross bar.

The Background: After a 1-3 start that left Lovie Smith with a 6-14 record in his second season, the Bears won eight consecutive games and 10 of 11 behind NFL Defensive Player of the Year Brian Urlacher to finish 11-5 and win the NFC North.

Divisional game: The No. 2 seed Bears earned a bye and played the No. 5 seed Carolina Panthers, whom they had beaten 13-3 at Soldier Field in Week 11. Panthers wide receiver Steve Smith, who had 14 receptions for 169 yards in the regular-season game, was even better in the playoffs. He caught a 58-yard touchdown pass on the second play from scrimmage and continued to make big plays every time the Bears got close. After falling behind 13-0, the Bears got within 16-14 and 23-21 — but each time, quarterback Jake Delhomme and the 5-foot-9 Smith made big plays, including a 39-yard touchdown, to extend the lead. Smith finished with 12 receptions for 218 yards and two touchdowns in a 29-21 victory.

The Background: Building off a foundation 2005 season, the Bears were the scourge of the NFL early in 2006. They dominated the Packers and Brett Favre in a 26-0 statement-game victory at Lambeau Field in the season opener and also routed the Lions (34-7), Seahawks (37-6), Bills (40-7) and 49ers (41-10) en route to a 7-0 start that also included the “Miracle In The Desert” — rallying from a 23-3 deficit to win 24-23 on Devin Hester’s 83-yard punt return. Only season-ending injuries to safety Mike Brown and defensive tackle Tommie Harris took the edge off a 13-3 season.

Divisional game: Facing a No. 4-seed Seahawks team that demolished in Week 4, the Bears nearly flopped in their playoff opener. They needed Robbie Gould’s 41-yard field goal in the fourth quarter to tie and won it on Gould’s 49-yard field goal in overtime.

NFC Championship Game: Facing the No. 2-seed Saints in mid-20s temperatures at Soldier Field, the Bears took a 16-0 lead before the Saints battled back, but made one mistake. Running back Reggie Bush taunted the Bears and somersaulted into the end zone on an 88-yard touchdown pass from Drew Brees that cut the Bears’ lead to 16-14 in the third quarter — and the Bears responded with 23 unanswered points for a 39-14 victory.

Super Bowl XLI: In one of the most exciting moments in franchise history, Devin Hester — with all eyes on him on the NFL’s biggest stage after seven kick-return touchdowns in the regular season — returned the opening kickoff 92 yards for a touchdown that gave the Bears a 7-0 lead over the Colts. But the Colts, with Peyton Manning and an effective run game, reeled in the Bears from there, running 81 plays to just 48 for the Bears. Trailing 22-17 in the fourth quarter, the Bears had a chance to take the lead. But Rex Grossman’s deep pass for Muhsin Muhammad was intercepted by Chicagoan Kelvin Hayden and returned 56 yards for a touchdown with 11:44 left in the fourth quarter and the Bears never recovered in a 29-17 loss.

The background: Coming off a disappointing 7-9 record in 2009 after acquiring quarterback Jay Cutler from Denver (and losing Brian Urlacher to a dislocated wrist in the 2009 opener), a rejuvenated Urlacher and Devin Hester (three punt return touchdowns) and free-agent defensive end Julius Peppers sparked the Bears (11-5 under Lovie Smith) to the postseason for the first time since 2006.

Divisional game: The No. 2-seed Bears faced the No. 4-seeded Seahawks, who won the NFC West at 7-9 but upset the No. 5 Saints in the wild-card round. Cutler threw a 58-yard touchdown pass to tight end Greg Olsen on his first career playoff pass and the Bears rolled to a 35-24 victory.

NFC Championship Game: Facing a Packers team they had a chance to eliminate from the playoffs in Week 17, the Bears fell behind 14-0 early in the second quarter at Soldier Field and faced an uphill battle. Cutler suffered a mysterious knee injury, Todd Collins was benched after one series and Caleb Hanie tried to rally the Bears. But Hanie was undone by B.J. Raji’s 18-yard interception-return touchdown and Sam Shields’ interception at the Packers 12-yard line in the final minute of a 21-14 loss.

The Background: The Bears hired Chiefs offensive coordinator Matt Nagy for an offensive boost, but it was Vic Fangio’s dominant defense — including an NFL-best 27 interceptions and 36 takeaways — that propelled the Bears to a 12-4 record and their first playoff berth in eight seasons.

Divisional game: Facing the No. 6 seed Eagles at Soldier Field, the No. 3 seed Bears and quarterback Mitch Trubisky struggled throughout the game but rallied to take a 15-10 lead with 9:04 left on Trubisky’s 22-yard touchdown pass to Allen Robinson. But Super Bowl LII MVP Nick Foles responded by driving the Eagles for a six-yard touchdown to Golden Tate for a 16-15 lead with 56 seconds left. Trubisky led a mad-dash drive in the final minute, but Cody Parkey’s 43-yard field goal attempt hit the left upright and then the crossbar without going over it with five seconds left to clinch a 16-15 loss.