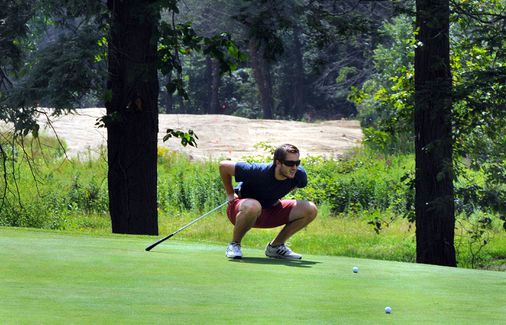 Though “Ponky” was lampooned in a 1988 Sports Illustrated article entitled “The Missing Links,”
fans of the game have long considered the state-owned property off Washington Street in Canton a mishandled gem of revered golf course architect Donald Ross.

Local environmentalists say the current work is filling wetlands that should be protected, and state environmental regulators still could require changes in the project. But after seeing on-again, off-again attempts at renovating the course over the last two decades, golfers are closer than ever to playing on the Ponkapoag of their dreams.

The $2.1 million project by the Department of Conservation and Recreation is restoring nine holes that have been closed since 2003 due to flooding. The reopening of those holes would put a capstone on the improved maintenance of the remaining 27 holes over the past four years, said Joe Leary, the DCR’s district manager of golf courses.

Standing on a hill overlooking one of the closed holes, Leary said he hopes that within five years, Ponkapoag will be considered for tournaments by the New England chapter of the Professional Golfers Association of America, the National Golf Association, and even the US Golf Association.

“That will be a proud day for DCR when we’re ready to host a big tournament,” Leary said.

But for years, the course was mired in, well, mire.

“It was in a state of neglect when I took over in March of 2010,” said Mark Brady, Ponkapoag’s superintendent and director of maintenance. “The conditions had slipped to a point where many golfers didn’t want to play it.”

According to Brady, state funding for decades was inadequate for maintaining the course properly, causing several fairways — along with staff morale — to sink.

It was those sunken fairways that attracted the attention of a group of Milton and Canton residents, who say that the property is wetlands, and should be treated as such.

“The way wetlands-protection laws work, what matters is less the history than the existing condition,” said Thomas Palmer, a Milton botanist, resource manager, and wetlands consultant. “Back Bay is not considered wetlands now, no matter what it was.”

In February, the state Department of Environmental Protection granted the DCR a waiver exempting it from certain drainage standards. But Palmer said the waiver request ignored nearly 11 acres of wetlands that he identified after examining soil and plant life. The waiver was granted based on false information, that only about 11,000 square feet of the site constituted wetlands, Palmer said, and as a result other environmentally sensitive areas are now being filled.

“There’s a lot of people who don’t understand my perspective,” Palmer said. “Their feeling is this is maintenance for an existing facility; I would say ‘existing’ is stretching it because these holes haven’t been used for years.”

The US Army Corps of Engineers determined that protecting wetlands was one of the best ways to prevent flooding in nearby urban areas, Palmer said, and he added that wetlands also provide wildlife habitats. He said the golf course borders the Fowl Meadow and Ponkapoag Bog “area of critical environmental concern’’ designated by the state, meaning its wetlands are particularly important.

In March, Palmer filed a lawsuit in Norfolk Superior Court in Dedham seeking an injunction to stop the work.

Superior Court Judge Angel Kelley Brown dismissed it on July 23, writing that Palmer would not be harmed more than other members of the public and therefore

did not have legal standing to seek the injunction.

A full hearing by the state environmental agency is scheduled for next month,
and Palmer could pursue an appeal in court. But he said that because the work is continuing, the amount of wetlands he could save is diminishing.

“If it were eventually ruled the wetlands were filled improperly, could I arrange to have them unfilled?
That to me is what should happen,’’ Palmer said, “but it is not realistic to expect it, because it just doesn’t seem to be in the playbook, in my experience.”

Ponkapoag consists of two 18-hole layouts, but holes 3-8 and 11-13 are closed on Course 1. Golfers can play Course 2, which is intact, or a “Course 3,” which uses holes from both courses, Leary said.

Construction began in April and is to be completed in October, Leary said, though the restored holes wouldn’t be used for a year as the grass grows in.

In the meantime, golfers at the course said improvements are already obvious and they look forward to a fully restored Ponkapoag. Improved irrigation on the playable holes has produced greener grass, and Brady’s attention to detail has made the course more attractive, golfers said.

Bill Arris of Whitman has been playing rounds at Ponkapoag for 25 years. His main worry about the restoration is that prices might increase.

“Right now the value for a senior five-day member can’t be beat, and the quality of the course is getting better every single day,” Arris said.

Ponkapoag’s rates — from $30 for 18 holes on weekends to $17 for seniors (and $15 for juniors) on weekdays — have made the game more accessible to lower-income golfers, Leary said. While not ruling out a future increase, Leary said rates will remain affordable.

The course also hosts the Ponkapoag Junior Golf Academy, which has been signing up more children every year as the course has improved, according to camp instructor Artie Carlson.

“It’s going to be a real gem when it’s done,” Carlson said as he wrapped up a putting lesson with a some elementary schoolchildren.

For Leary, the course’s history is another reason to treat it with respect. Historically welcoming to African-American players, Ponkapoag hosted the 1941 National Championship of the United Golf Association, which was open to black professional golfers at a time when they could not join the PGA.

And while Brady acknowledges that golf has the reputation as an elitist sport played on environmentally insensitive facilities, he dismissed those labels, particularly in Ponkapoag’s case.

Ponkapoag uses only 10 to 12 percent of the amount of chemicals used on other area golf courses, Brady said, an unintended benefit of years of casual maintenance that exposed the course to pests, to which it adapted.

He praised golf as a lifelong sport, and golf courses as a refuge for certain types of wildlife.

For Palmer, however, Ponkapoag’s restoration represents more disappearance of wetlands and danger to the area’s ecosystem.

“The idea of preserving natural scenery is still the reason for the Blue Hills, and the major wetland filling going on now is not the same thing to me,” Palmer said. “A filled wetland is not natural.”