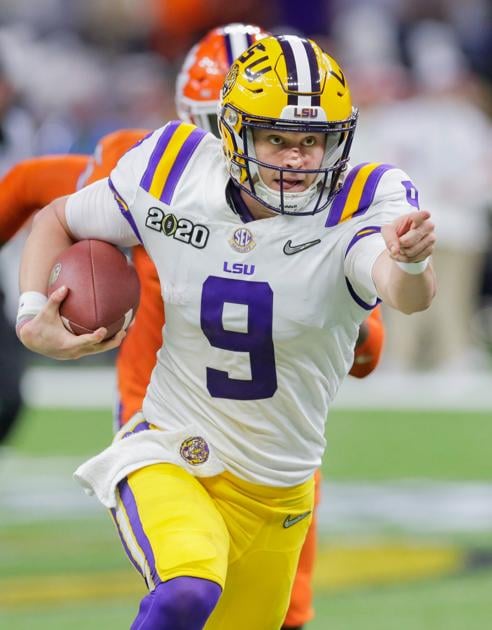 Joe Burrow’s high school named its football stadium for him, the classic small-town hero made good.

What can LSU do for him, now that Burrow has completed the trinity that in 127 years of the school’s gridiron history only the late Billy Cannon can match? He’s been a national champion, a Heisman Trophy winner, and as of Thursday night a No. 1 overall draft pick, scooped up by his home-state Cincinnati Bengals in one of the biggest no-brainers in recent draft memory.

They permanently retired Cannon’s No. 20 in 1960 and two years ago unveiled his statue in front of Tiger Stadium.

What does Burrow deserve? If the school were a nation, LSU would have to put his portrait on its currency. His likeness on a stamp. Declare his birthday (Dec. 10) a national holiday.

From Ohio, Joe Burrow descended to Louisiana. To Ohio he has returned.

In 2018, LSU safeties coach Bill Busch, who was at Ohio State when Burrow was a backup there, told Ed Orgeron if the Tigers could get Joe, the transfer quarterback could take them to the College Football Playoff.

Turned out, Busch was underselling the young man. Burrow was the wisest recruiting decision Coach O ever made. To borrow one of his lines from “The Blind Side,” that boy can really pepper the gumbo.

If you had told Burrow before last season he would be the No. 1 pick, what would we have said?

“I would have told you you were crazy,” Burrow said on ESPN. “But it’s a dream come true.”

Orgeron said recently what an ad for LSU football Thursday’s first round would be, with Burrow going No. 1 and as many as four or five Tigers expected to follow him. Though Burrow’s LSU career is over now, it hardly means he will stop working to the program’s benefit.

Yes, there is the ugly specter of what could go wrong from 13 years ago, when JaMarcus Russell was selected No. 1 overall by the then-Oakland Raiders. Russell was hardly the first high and mighty draft pick to fizzle out, but he got stuck with the label of biggest draft bust ever (maybe he can paper over that label with a sheet of Joe Burrow commemoratives).

There are no guarantees, and frankly Burrow faces a much bigger task in trying to remodel the Bengals (2-14 last season) into a championship contender than he did at LSU. The Tigers were a Batman jetpack and an elite signal-caller away from the promised land. The Bengals have been wandering so long in the wilderness they should call Burrow “Moses” if he can lead them out.

But Burrow brings all the elements you want to his all-important position. An accurate arm — he doesn’t have a bazooka, but neither did Joe Montana — elusiveness, smarts and an “I’m tougher than you are” winner’s mentality. As it did at LSU, his attitude should permeate the rest of this Cincinnati franchise, much as Pete Rose’s did for the Cincinnati Reds 50 years ago.

Charlie Hustle finally has a worthy successor in Ohio Joe. Folks there are going to eat him up like a plate of three-way chili. (That’s chili, pasta and shredded cheddar cheese on top. Yeah, I don’t know, either, but apparently it’s a Cincinnati thing.)

Joe Burrow’s most impossible task dropped on his doorstep almost a week ago: an unassembled package of tripods, of iPads, of wires.

The Bengals just got what may be a transformative Christmas present. Back here in Louisiana, Burrow is the gift that will keep on giving for LSU football. He proved LSU can play, and win, with modern-day football, leading a state-of-the-art offense that led the FBS in points scored and yards gained.

The lasting benefits of Burrow’s brief two seasons at LSU may take five or 10 years to really come to fruition. But he changed the program in ways, with apologies to the great Cannon, that no other LSU player ever has. Not a generational player, but perhaps the kind who comes along once a century.

Now Burrow is off to seek his fame and fortune on the NFL stage, Ohio’s native son and Louisiana’s adopted son all rolled into one fearsome football package. Football fans here will hope his pro career is everything his college career was — unless, of course, he finds himself in the Super Bowl one day against the Saints.

Burrow will try to avoid getting sacked by ex-LSU teammate K’Lavon Chaisson when the Jacksonville Jaguars play in Cincinnati. Chaisson was the first Tiger taken after Burrow at No. 20, while Justin Jefferson went to the Minnesota Vikings at No. 22.

The Saints still had some great LSU choices with their pick at No. 24. But in this time of upheaval, it is comforting to know that some things never change. For the 54th straight year, the Saints punted on drafting an LSU player in the first round, picking Michigan center/guard Cesar Ruiz over Patrick Queen or Clyde Edwards-Helaire. They gave the Tigers five first-round picks in all when Queen went at No. 28 to the Baltimore Ravens and Edwards-Helaire went at No. 32 to the champion Kansas City Chiefs.

Somewhere the Washington Generals, the Harlem Globetrotters’ eternal foil, are popping champagne at a socially acceptable distance from each other. The franchise that once used its No. 1 pick on punter Russell Erxleben (yes, a punter) and traded away all its other picks in 1999 to trade up for the textbook headcase Ricky Williams couldn’t pick a Tiger when there virtually a starting lineup to choose from.

Maybe next year Charlie Brown will get to kick the ball.

Success! An email has been sent with a link to confirm list signup.

Error! There was an error processing your request.

Amazon.com: Dancing in the Glory of Monsters: The Collapse of the Congo and the Great War of Africa eBook: Stearns, Jason: Kindle Store