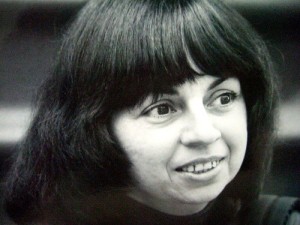 No discussion of Queer History Month would be complete without paying homage to the woman whose multi-disciplinary approach to queer theory, Chicano/a studies, gender, cultural theory, spirituality and aesthetics transformed the feminist movement’s understanding of what it means to navigate oppression and privilege.

Gloria Evangelina Anzaldúa was born in the Rio Grande Valley of Texas on September 26, 1942. As an infant, she developed an extremely rare hormonal imbalance, which lead her to start menstruating at only three months old. In her Interviews/Entrevistas, Anzaldúa explained to AnaLouise Keating that

I had no sexual identity because this whole part of my body was in constant pain all of the time. … I couldn’t play like other kids. I couldn’t open my legs, my mother had to put a little piece of rag there. My breasts started growing when I was about six, so she made me this little girdle. I was totally alienated from this part of my body.

The pain often triggered high fevers and violent convulsions. For years, Anzaldúa blamed herself for the intense trauma of her body; it was only after receiving a complete hysterectomy that she was finally free of the debilitating pain of her reproductive organs.

A vividly realized internal life of the mind and spirit became crucial to Anzaldúa’s survival. Using books as a refuge from tremendous physical pain, she spent her free time inventing stories to share with her siblings. Because she initially wanted to be a doctor, her formative years were concentrated on advanced math and science courses, while writing and art work were private efforts that her friends and family often viewed as “strange.” After graduating as valedictorian of her high school class, Anzaldúa first spotted a lesbian couple making love in a friend’s dorm room at Texas Women’s University; terrified, she ran down the hall. Her roommate later reassured Anzaldúa that “‘This is a woman’s school and there are a lot of those here.’ And I thought, ‘Well, maybe that’s why I chose to be with women.’” Over time, she formed relationships with other queer students as she began working on campus with the Chicano and feminist movements. Her work as a high school teacher also bolstered her sense of queer identity; in reading the love letters of her students and discussing their experiences at summer camps, she became a confidante and safe space for queer youth.

Because of financial concerns, Anzaldúa left Texas Woman’s University after only two years of coursework. But her activism continued while she earned a triple Bachelor of Arts in English, art and secondary education from Pan American University, then a masters degree in English and education from the University

of Texas at Austin. The pervasive sexism of the Chicano movement and racism/classism of the feminist movement remained at the forefront of her work. Teaming with Chicana lesbian playwright Cherríe Moraga,the two women co-edited This Bridge Called My Back: Writings by Radical Women of Color. Today, This Bridge Called My Back is considered essential reading in the feminist canon, highlighting the contributions of writers negotiating the intersections of race, class, gender and sexuality with letters, poetry, stories, essays and artwork. The first edition by Persephone Press went out-of-print in 1981, but the anthology was revised and issued multiple times, including a second edition in 1984 from Kitchen Table Press, a women of color publishing collective, a third edition and a Spanish-language edition by Third Woman Press.

Her follow-up work, Borderlands/La Frontera: The New Mestiza, pioneered the genre of autohistoria-teoría: a blend of theory and biography that combines prose, poetry and critical reflections in English and Spanish. Anzaldúa continued to publish anthologies such as Making Face, Making Soul/Haciendo Caras: Creative and Critical Perspectives by Feminists of Color and contributed fiction, poetry and essays to the popular second-wave feminist journal Conditions. Her final book was a much-anticipated follow-up anthology to This Bridge: Anzaldúa partnered with Interview/Entrevistas collaborator AnaLouise Keating to edit this bridge we call home: radical visions for transformation.

In 2004, Anzaldúa passed away from complications of diabetes. Yet her work continues to inspire audiences in both academic and secular fields. This past April, the University of Texas Press published the anthology Bridging: How Gloria Anzaldúa’s Life and Work Transformed Our Own, featuring 30 contributors reflecting on the impact of her writing, conversation and life. “I write because I’m scared of writing,” she once claimed, “But I’m more scared of not writing.”

I continue to be grateful for her courage, her queerness and her existence.

Photo of Gloria Anzaldua in 1980 from Flickr user K. Kendall under license from Creative Commons 2.0

Allison McCarthy is a freelance writer and a regular Ms. blogger. Her work has been featured in Bitch, AlterNet, Girlistic, Global Comment, Ariel Gore’s Literary Kitchen, Feministe, The Feminist Wire, ColorsNW, The Baltimore Review, Hoax, The Write Side-Up, Scribble, and JMWW, as well as in the anthologies Robot Hearts: Twisted and True Tales of Seeking Love in the Digital Age (Pinchback Press) and Dear Sister: Letters to Survivors of Sexual Violence (forthcoming). Her guest column for GOOD magazine was selected as an Editor’s Favorite for 2011. She is currently a graduate student in the Master of Professional Writing program at Chatham University and lives in Maryland