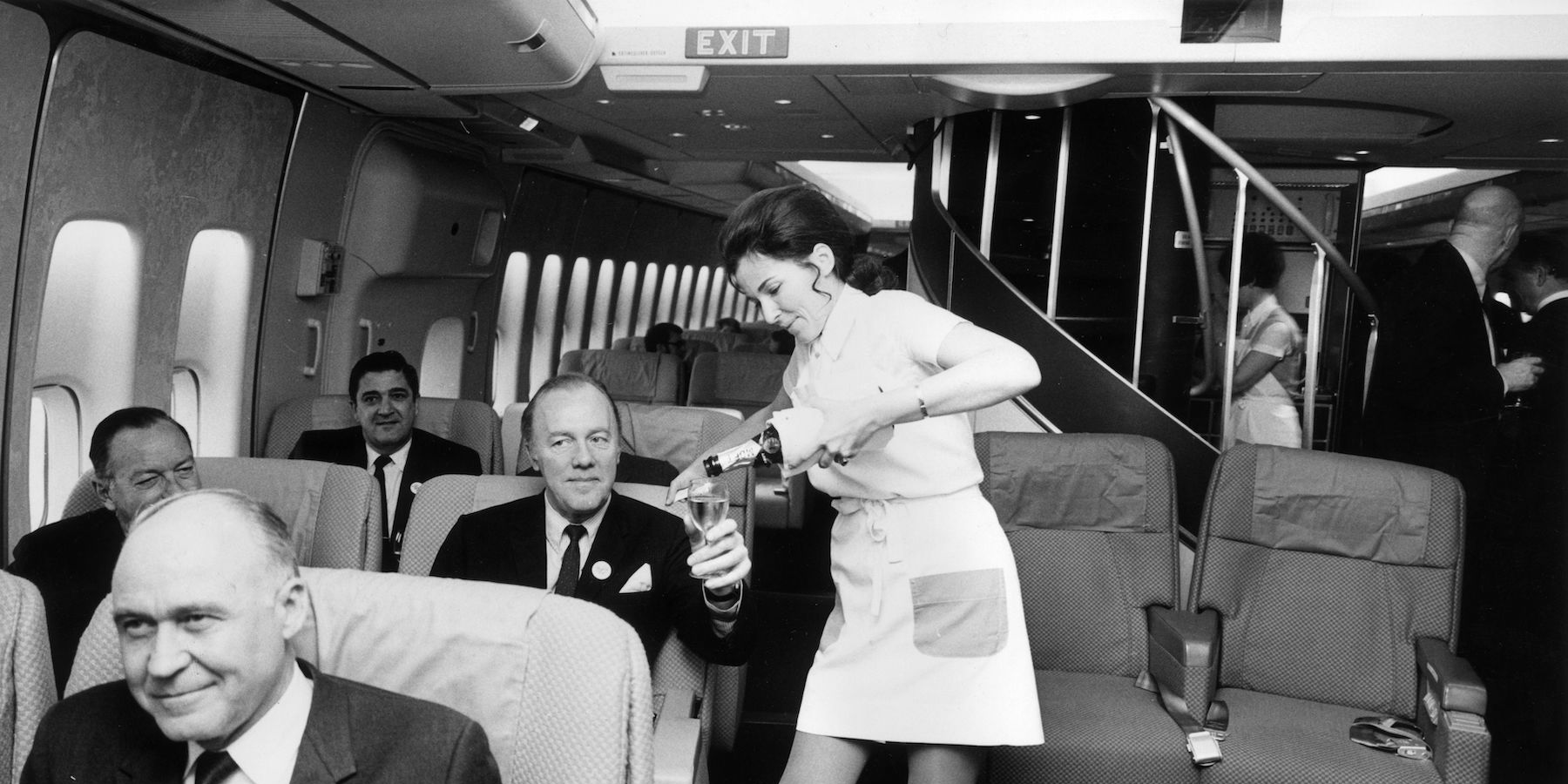 Pan American World Airways – or Pan Am – was once the biggest international airline in the world.

The American airline, founded in 1927, quickly became one of the most iconic airlines in history, remembered for its glamorous cabins, passengers, and crew.

It started to experience financial difficulty and filed for bankruptcy in January 1991, ultimately shuttering later that year.

Nevertheless, Russell L. Ray, the company’s president and CEO, described Pan Am as „an airline whose name will be forever forged in American history.“

Pan Am now serves as a symbol of a bygone era of luxurious air travel. Scroll down to see what its glory days looked like:

Flying with Pan Am was a luxurious experience that meant wearing some of your finest clothes — and being served refreshments far from your assigned seat. 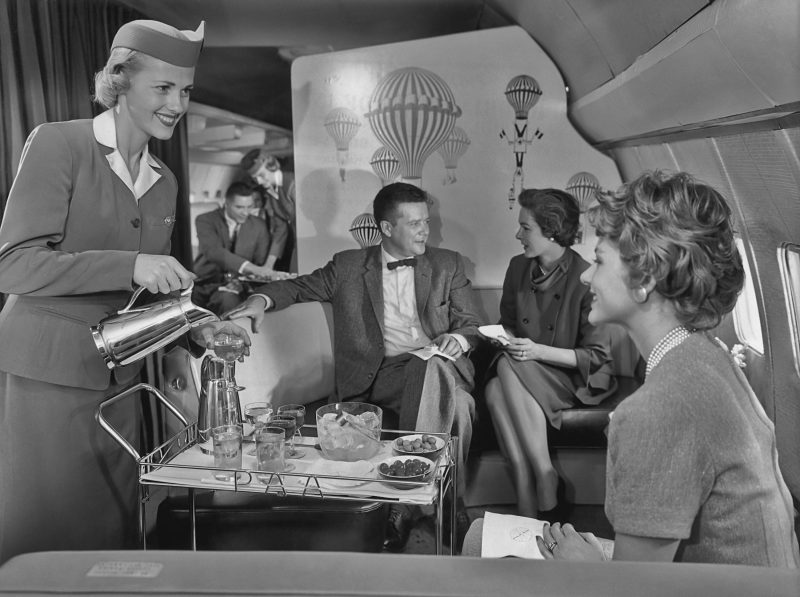 Foto: A flight attendant serves cocktails in the lounge of a new Pan Am Boeing 707.sourcePictorial Parade/Archive Photos/Getty Images

Some airlines now still have a separate lounge, like the economy and business classes in the Airbus A380 plane.

But it’s a much rarer experience in the air now.

That being said, the cabin seats also provided plenty of space, and service, for when you were there. Here’s what it was like to get served Champagne in the first-class cabin of a Boeing 747. 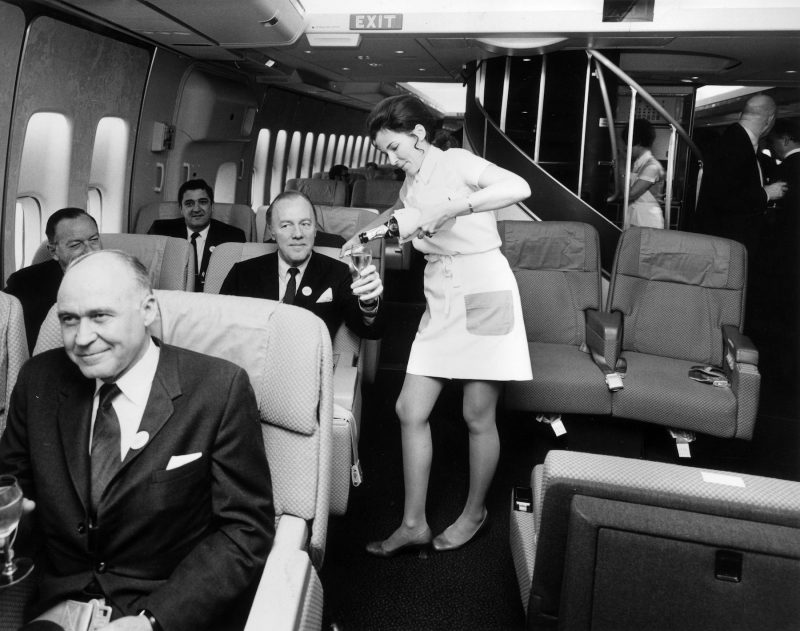 The staff was trained to provide this service. This photo, taken around 1960, shows crew practising serving meals at the Pan American World Airways stewardess school in Long Island. 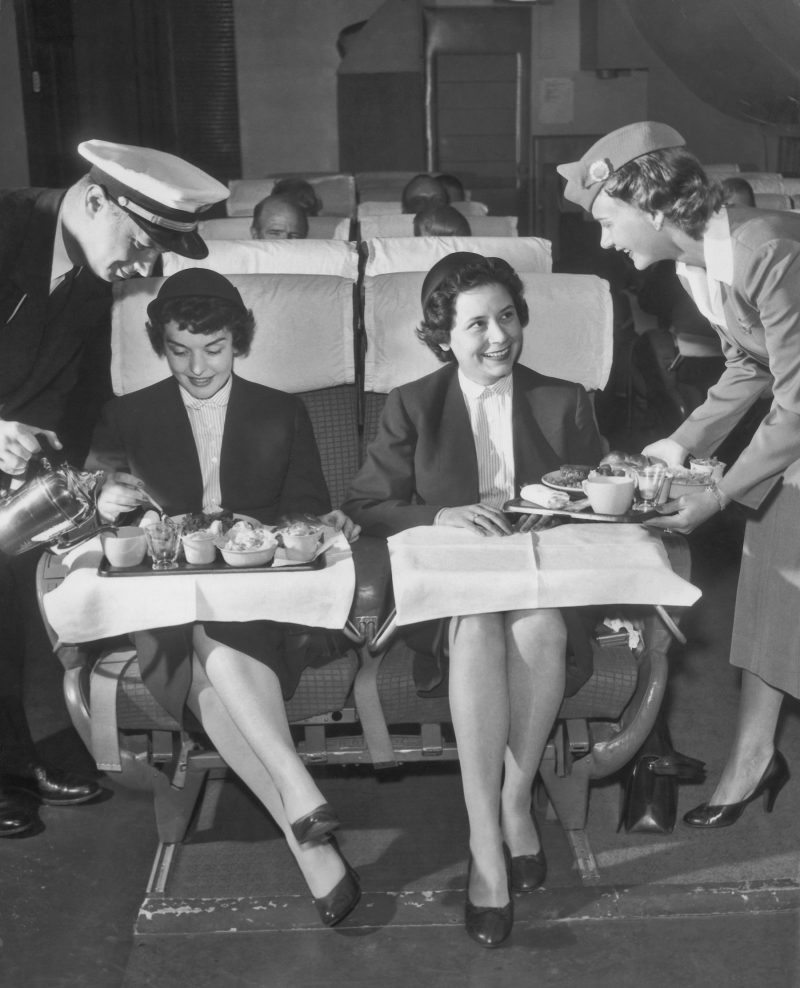 On real flights, what was served on board included tea and coffee. 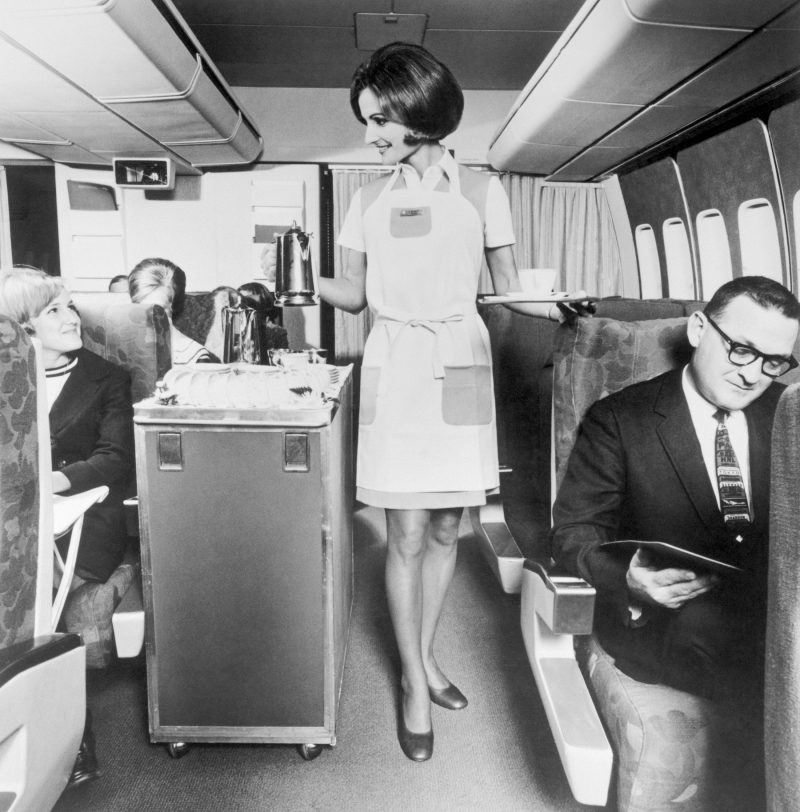 Seats were quite roomy in economy too. This is the economy class of a Boeing 707 plane in 1958. 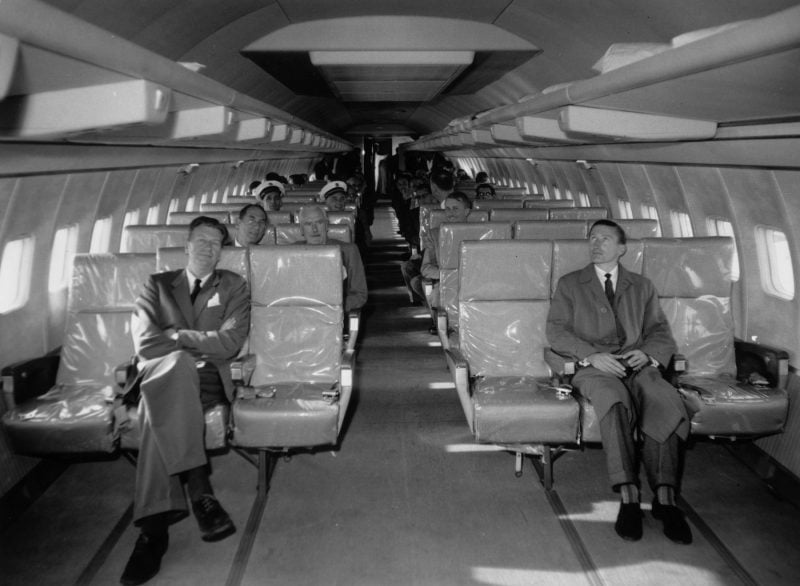 Personal space seems to have been key to Pam Am’s vision for the skies — here’s what a mock-up model of a Boeing 707 Stratoliner cabin looked like around 1957. 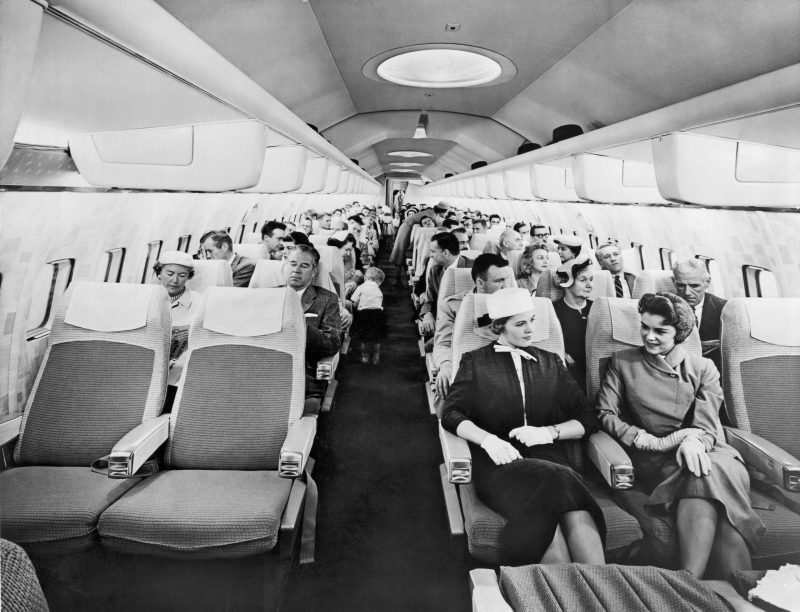 Children often took advantage of the space too. 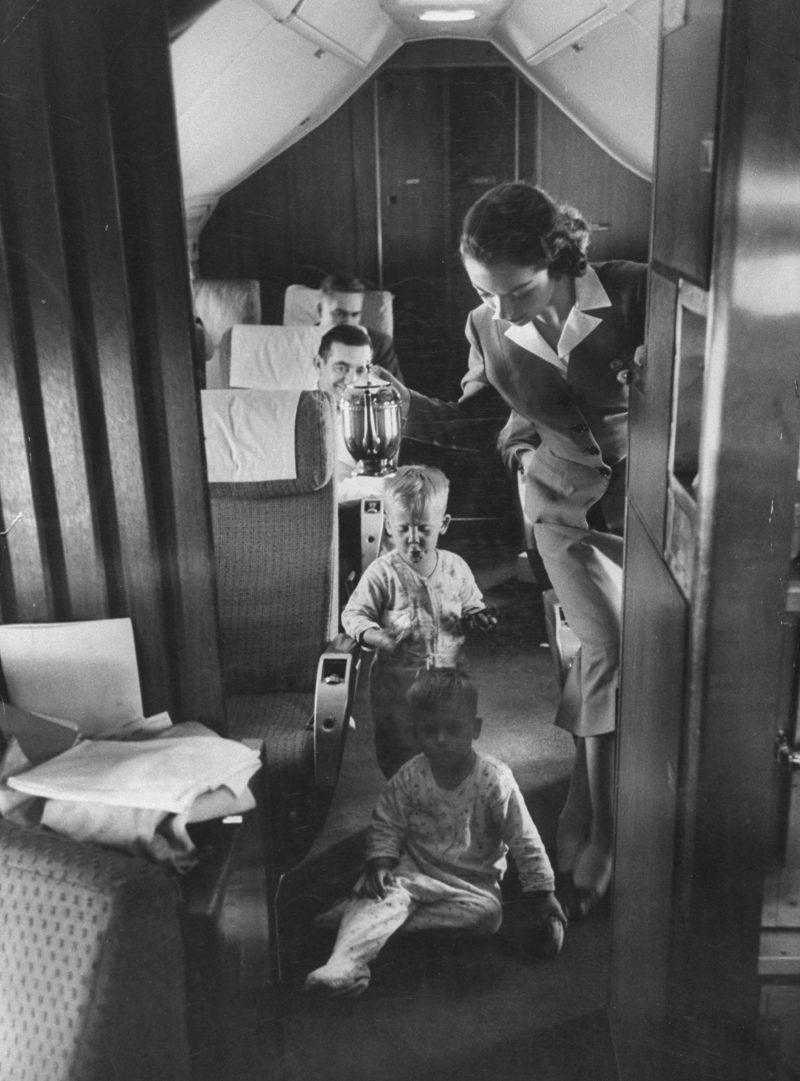 Technology may not have been as advanced as it is now, but there was still entertainment on board, with shared screens placed high up above people’s seats. 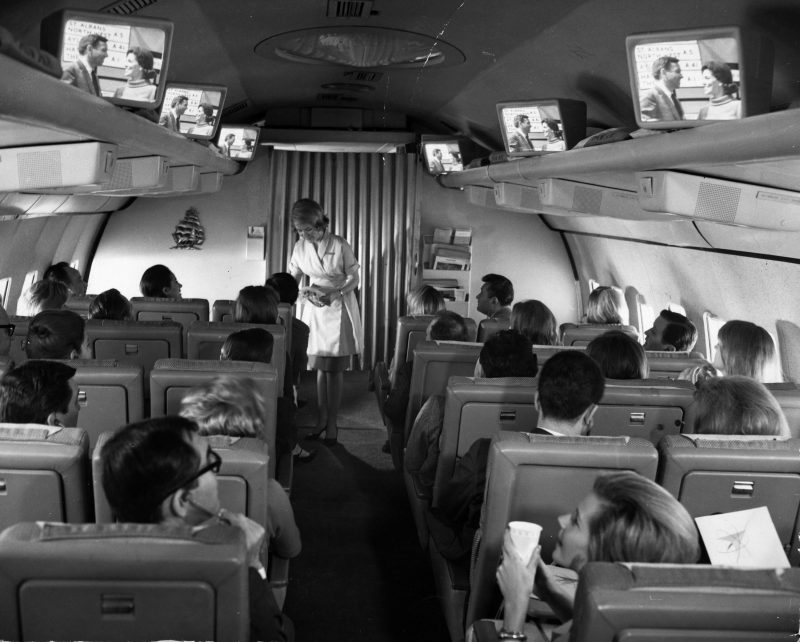 Many planes had an upper deck, accessed by a spiral staircase. 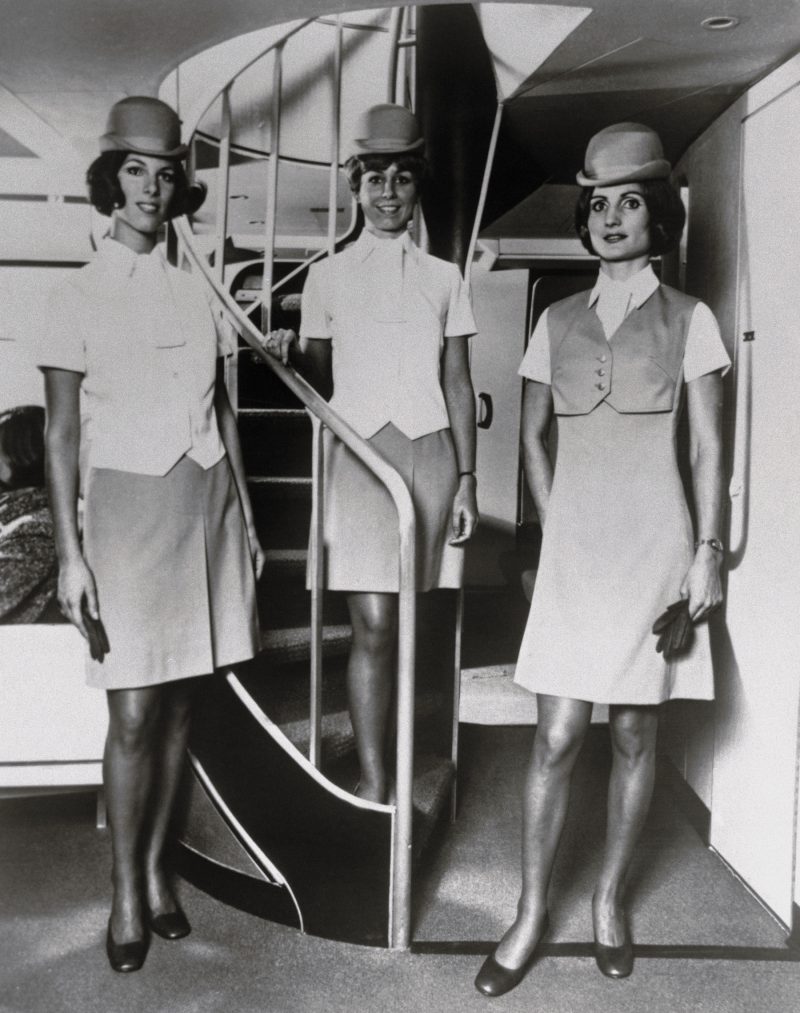 Foto: Flight attendants pose in their uniforms on stairwell aboard the new Boeing Pan Am 747 jet transport in 1969.sourceBettmann/Contributor/Getty Images

Some of the most luxurious
spaces were in the airline’s Flying Clipper Ships — a type of aircraft that no longer flies today. 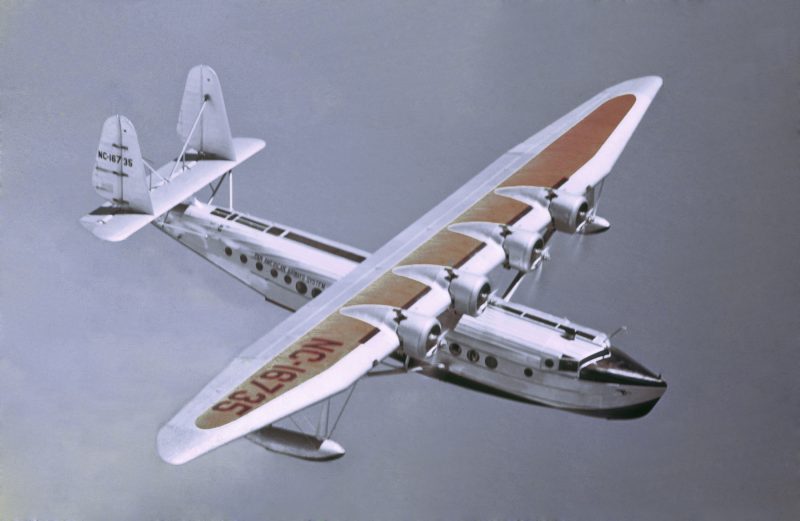 This shows the 50-foot main aisle of one of those aircrafts, where travellers relaxed in their finery. 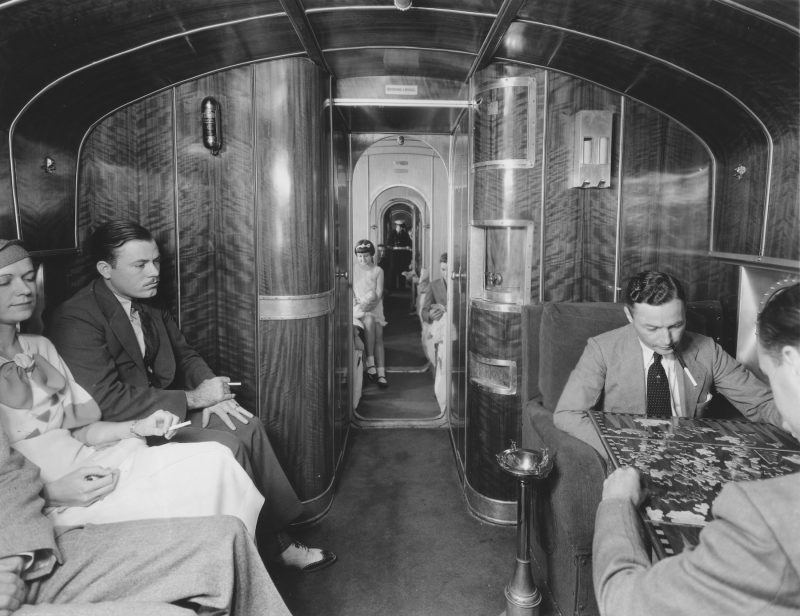 This is what the main cabin of a Clipper was like around 1936. 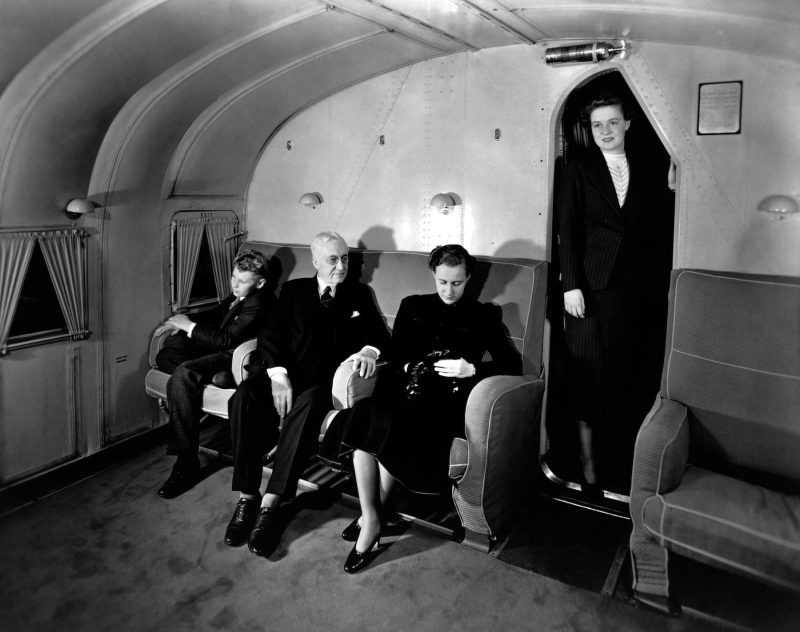 The airline operated many routes, and its advertisements showed how its reach made the planet a „small world.“ 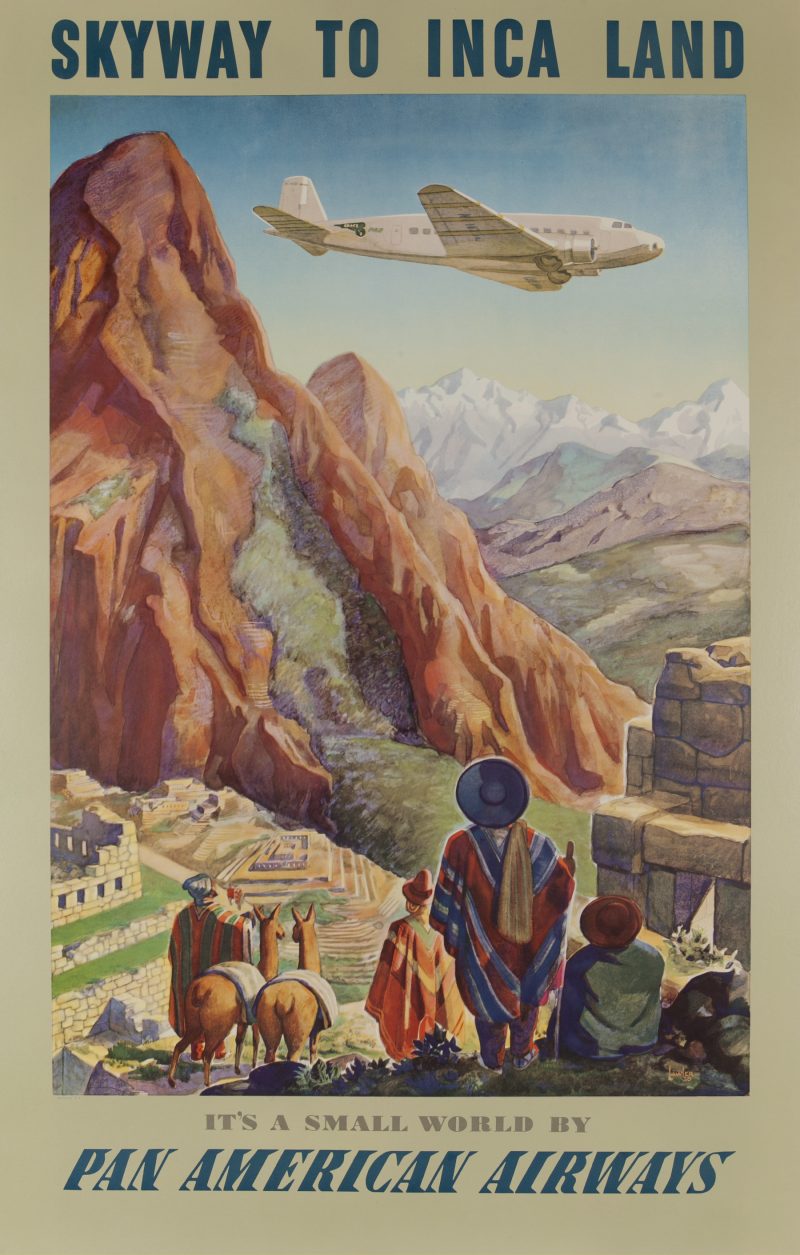 Foto: A travel poster from circa 1938 showing a Pan Am Aircraft flying over the Andes Mountain and Machu Picchu in Peru.sourceDavid Pollack/Corbis via Getty Images

The cabin crew’s uniform was also iconic, and their lives were considered deeply glamorous. 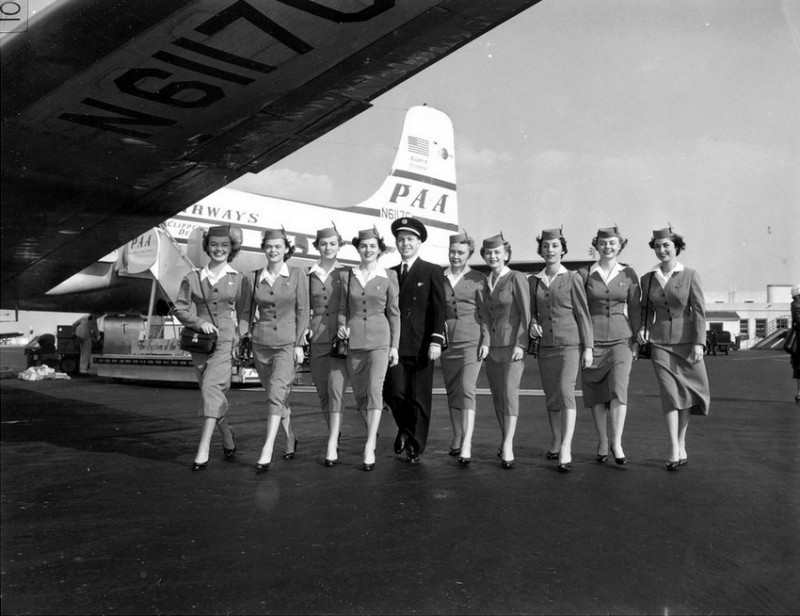 Foto: sourceCourtesy of the Pan Am Historical Foundation

Here’s a group of flight attendants posing at the Aeropuerto Los Cerrillos in Santiago, Chile, around 1947. 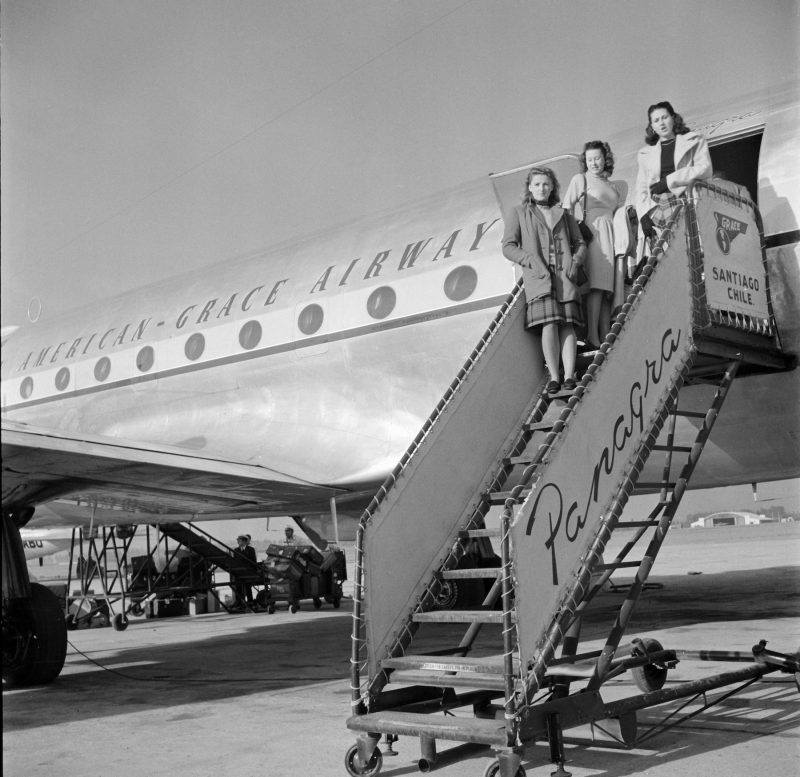 They also got to work alongside some of the world’s biggest celebrities. Here are the Beatles about to fly with Pan Am from London to America in 1964. 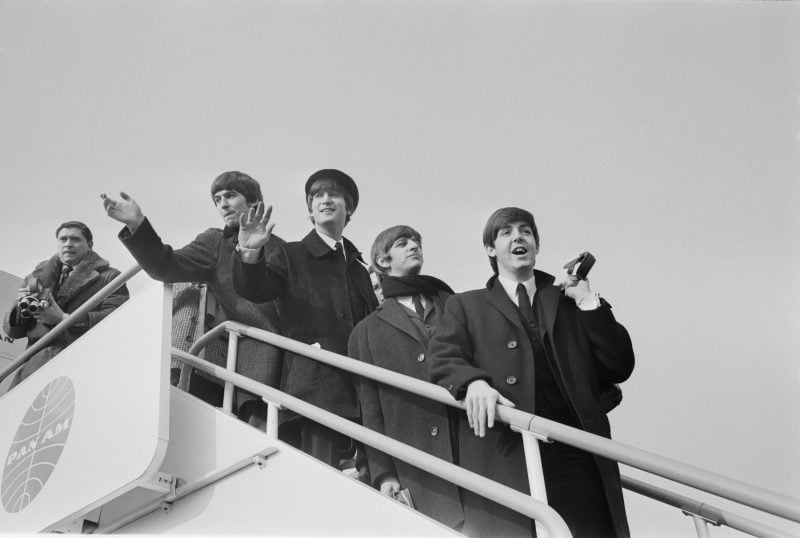 The airline’s terminal at New York International Airport — now known as JFK — also became a special destination in its own right. It became somewhere people would enjoy fine dining and watch planes take off. 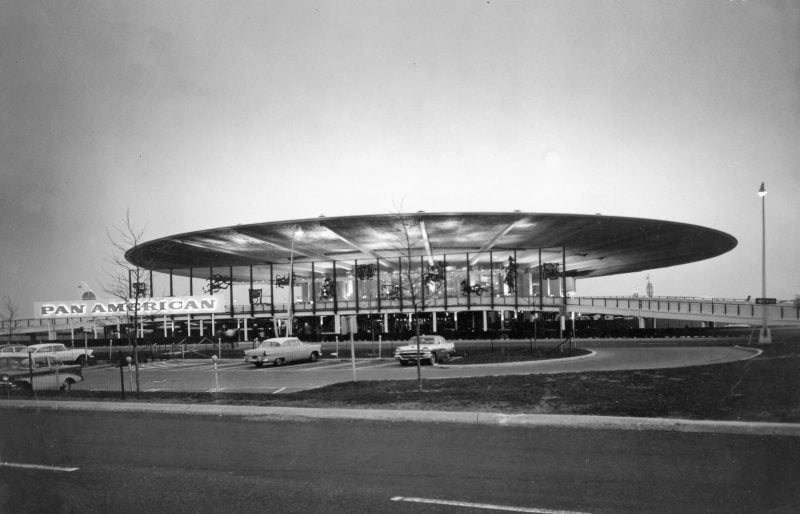 Foto: The exterior of Pan Am’s passenger terminal at New York International Airport, which opened in May 1960. This photo was taken around 1965.sourceHulton Archive/Getty Images

But this glory was not to last forever. The airline was ultimately brought down by a combination of a weak US economy, rising fuel costs, and various public-relations hits. It filed for bankruptcy in January 1991, and ultimately closed that December. 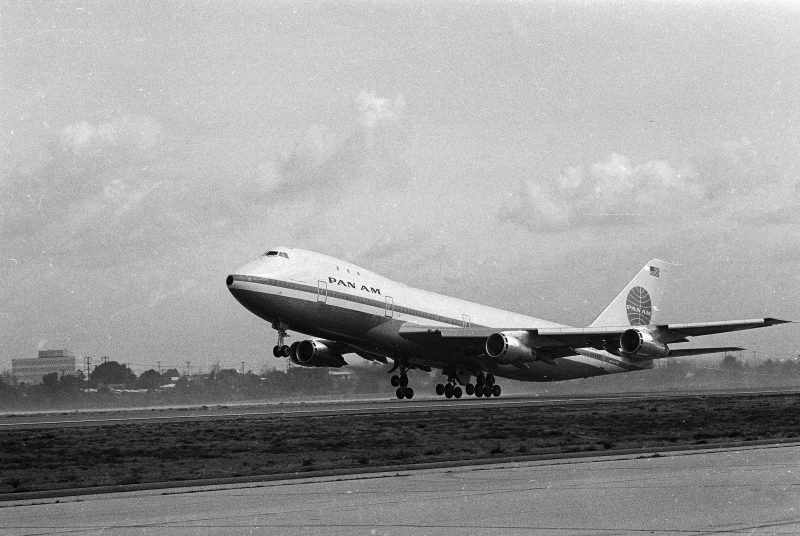 Among its problems was the public relations nightmare that accompanied the 1988 Lockerbie bombing, when Pan Am Flight 103 was destroyed with a bomb as it flew over the Scottish town of Lockerbie.

The airline filed for bankruptcy protection in January 1991, and struggled on for a few months before folding suddenly that December.

„Today we see the end of an airline whose name will be forever forged in American history,“ Russell L. Ray, the company’s president and CEO, said at the time.

Pan Am’s terminal in New York was also ultimately demolished between 2013 and 2014, long after the airline closed. 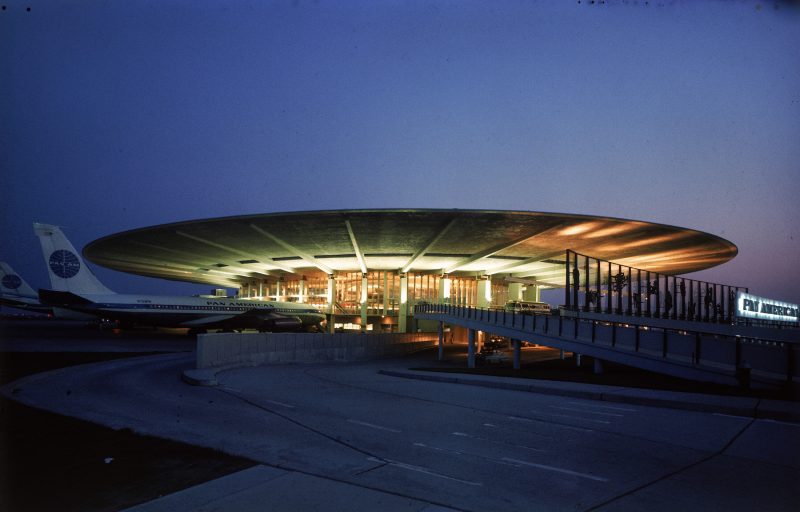 Foto: The exterior night view of the Pan Am Terminal in 1961.sourcePhoto by Dmitri Kessel/The LIFE Picture Collection via Getty Images

Download ebooks for free in pdf format Someone Who Will Love You in All Your Damaged Glory: Stories by Raphael Bob-Waksberg