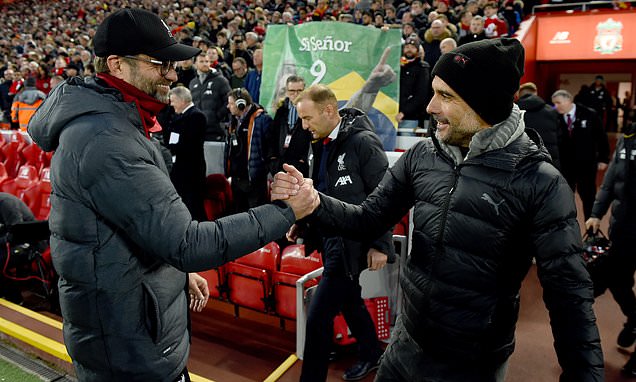 ‘Liverpool have been extraordinary, our target is to imitate them’: Pep Guardiola hails Jurgen Klopp’s side but reveals determination to add to Manchester City trophy haul in Carabao Cup final against Aston Villa

Pep Guardiola‘s body language is usually a giveaway and on Friday, purposefully leaning forward in his chair was the perfect illustration.

The topic was mentality and Manchester City‘s appetite to lift another domestic trophy. As he scrunched his nose, almost spitting out the words ‘hungry’ and ‘starving’, you sensed this Carabao Cup final really does mean more than many realise.

City will become the first team since Liverpool in 1984 to lift three consecutive League Cups if they beat Aston Villa at Wembley. The Premier League title is long gone and this competition is not high on his list of priorities, but to those in the City Football Academy, ticking off trophies is a sign of continued upward mobility.

Sir Alex Ferguson used to say that if Manchester United could not win a big one then they better make sure there was something to show for the season to retain momentum more than anything.

Guardiola is of the same mind as the man he so admires, talking of clinching a sixth consecutive piece of domestic silverware. He does, of course, include two Community Shields.

‘When we landed back here on Thursday, Real Madrid was absolutely gone in my mind and I was thinking about Aston Villa,’ the City manager said.

quarter-finals. That is the only way these clubs, these big institutions, become stronger every year.

‘Liverpool have been extraordinary. We can learn from them. Our target is to imitate them. But more important than that is trying to be there in the other competitions.’

Guardiola’s relationship with this competition is complex. Like many others, he uses the early rounds to blood the most promising youngsters and would actually rather it was scrapped altogether. Yet for him, anything that shines is worth pursuing with vigour. The way he approached last month’s semi-final first leg at Old Trafford — outfoxing Ole Gunnar Solskjaer with an inventive formation — revealed a man unwilling to relent on microscopic preparation, even for the smallest pot of the lot.

Victory on Sunday would make it four straight major trophies domestically and six of the last seven available.

If City win Sunday’s Carabao Cup, it will be their fourth straight major trophy domestically

City are fighting on three fronts and more than one trophy at the end of the season would be a success for a manager who has had to contend with a scarcely believable amount of strife — the two-year Champions League ban, the three-pronged Premier League investigation, injury to Aymeric Laporte and assistant Mikel Arteta’s departure to Arsenal.

Guardiola’s emails have also been hacked by a disgruntled former contractor. Asked if that all adds up to a unique year, he smiled. ‘A little bit. Johan Cruyff told me once that the problem with the managers at the big clubs is that 70 or 80 per cent is issues off the pitch and just 20 on the pitch.

‘At the time I thought, ‘He’s crazy’. But it was true. We have to handle it, help the club and focus on what we love. There are no words to express my gratitude to these players.’