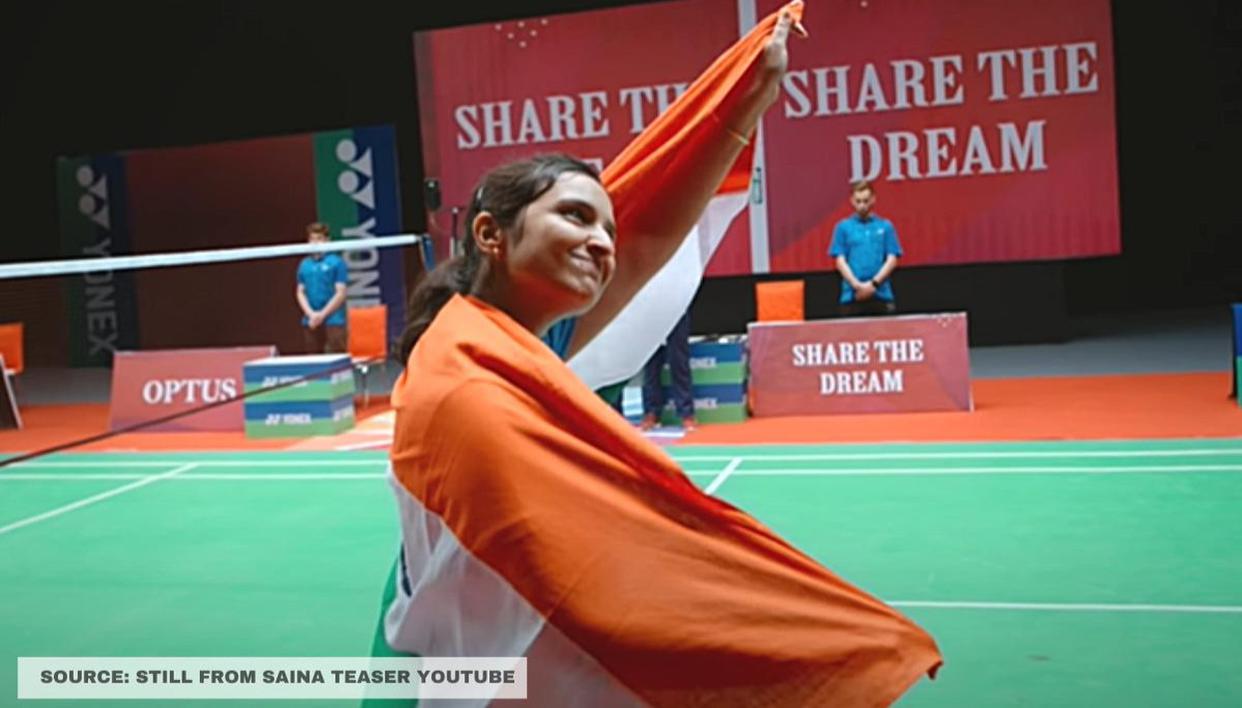 A couple of days into the release of her Netflix film The Girl On The Train, the teaser of Parineeti Chopra’s yet another highly-anticipated film ‘Saina‘ has finally been released by the makers. The upcoming biographical sports drama will take the viewers through the journey of Saina Nehwal from being a small-town girl to becoming the world’s number 1 woman badminton player from India. After months of anticipation, the much-awaited teaser of the Amole Gupte directorial was dropped on T-Series’ YouTube channel today.

Also Read | From Janhvi Kapoor’s ‘Roohi’ To Parineeti’s ‘Saina’, Movies To Hit The Screens This March

After announcing Saina’s release date a couple of days ago with a teaser poster of the upcoming film, T-Series released the teaser of Saina Nehwal’s biopic on March 4, ahead of the film’s release on March 26, 2021. With the teaser release, the makers of the film assured a glorious tale of the Olympic medal-winning badminton player to the masses. The biopic will showcase the life journey of Saina from her childhood to her struggle with finding her feet in the sport as a professional player, who goes on to represent the country in several international badminton tournaments.

Parineeti delivered some powerful dialogues as reel-life Saina in the teaser of the biopic such as, “Kadchi-Tawe Ke Badle, Maine Pakdi Talwar” and “Mera Dhyay Ekdum Saral, Samnevale Ko Chhit Kar Dena, Maar Dena”. The teaser highlighted Saina’s numerous achievements to hike the audience’s excitement for the film’s release, from her historic Olympic win to being honoured with several prestigious awards like the Padma Shri, Padma Bhushan and the Arjuna Award to name a few.

Along with focussing on Saina Nehwal’s career trajectory as a badminton player, the makers also didn’t miss out on any details to transform Parineeti as Saina, be it her hairdo or her facial birthmarks. Furthermore, the Kesari actor’s performance too as Saina Nehwal in the teaser looked quite promising as she delivered some high-octane scenes with sheer ease, just like a professional badminton player.

Meanwhile, alongside Parineeti, the teaser of Saina also starred Manav Kaul. While the biographical film has Amole Gupte at its helm, it is bankrolled by Bhushan Kumar, Krishan Kumar, Sujay Jairaj, Rashesh Shah under the banners T-Series and Front Foot Pictures. Unlike Parineeti’s last film The Girl On The Train, Saina is slated for a theatrical release on March 26.

Get the latest entertainment news from India & around the world. Now follow your favourite television celebs and telly updates. Republic World is your one-stop destination for trending Bollywood news. Tune in today to stay updated with all the latest news and headlines from the world of entertainment.

glory Archives – Step Into The Story