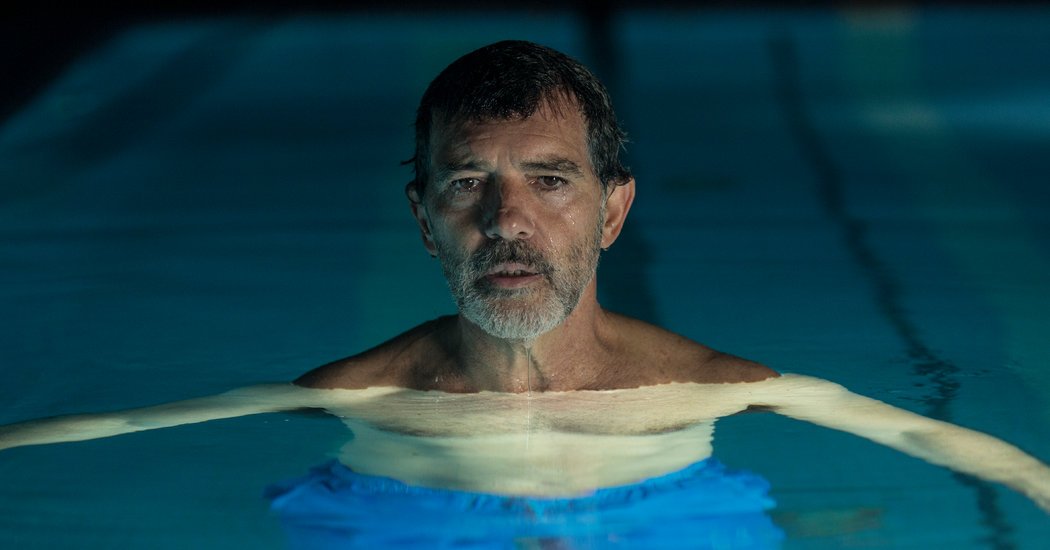 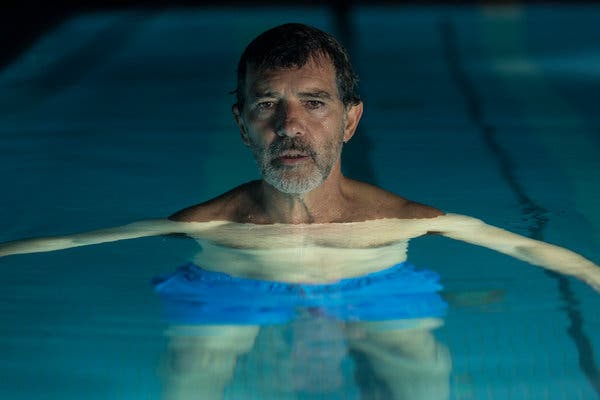 When you purchase a ticket for an independently reviewed film through our site, we earn an affiliate commission.

Every so often in Pedro Almodóvar’s sublime “Pain and Glory,” Salvador Mallo (Antonio Banderas) closes his eyes and drifts away. A celebrated Spanish filmmaker, Salvador has lost his bearings. He’s gravely depressed, and his body seems to have permanently surrendered to his maladies, to his bad back, migraines, asthma and fits of terrifying, mysterious choking. When a friend offers him some heroin to smoke, Salvador readily lights up and disappears. His nagging pains suddenly give way to images from his childhood, idylls that brighten the screen like beacons in a fog.

A story of memory and creation, youth and its loss, “Pain and Glory” circles around the idea of art as self-creation. The precipitating event — the thing that nudges Salvador and the movie forward — is the screening of an early triumph, a 1980s film called “Sabor.” (Its poster is suitably Almodóvarian: a strawberry-like tongue licking its luscious red lips.) Uneasy about the screening, Salvador reaches out to one of its actors, Alberto (Asier Etxeandia), a debauched looker with dangerous habits and a thing for skulls. The men haven’t spoken for years, but slip into a thorny intimacy that’s almost domestic, pushing and pulling at each other while picking at old scabs.

The screening turns into a mild farce, but it stirs something in Salvador, lighting a small fire. The grinning face of death hangs over “Pain and Glory,” but it soon emerges that Salvador’s most debilitating issue is that he is a man without desire. He’s alone and hasn’t made movie in a while, and a new one doesn’t seem on the horizon. Yet even as he idles, his will to create — to dream, share stories, make drama — remains intact. He may not be shooting a film, but it’s telling how much his life seems like a melodrama or a comedy or even, as in a gritty scene with slashing knives and blood, a thriller.

One of Almodóvar’s talents is his transformational, near-alchemical use of blunt ideas, how he marshals crude gestures, gaudy flourishes and melodramatic entanglements. The emotions still sting here, and the colors glow like traffic lights — there are eye-popping bursts of stop-sign red and go-go green — and the movie is as visually striking as any Almodóvar has made. But the narrative is elegantly structured rather than clotted, and its tone is contemplative as opposed to frantic, as if he had turned down the volume. A great deal happens in “Pain and Glory,” just not ritualistically and not at top volume. Its agonies are tempered, its regrets hushed, its restraint powerful.

All that said, the first time you see Salvador he’s at the bottom of a cerulean-blue swimming pool in a seated position, as still and heavy as a dropped anchor. He looks like he’s meditating, but then again he might be drowning. Whatever the case, the shot and its uncomfortable duration (you may find yourself nervously counting off the seconds) create a sense of mounting unease. Salvador looks so vulnerable with his near-nakedness and arms akimbo, a vivid scar slashed across his torso. Keep looking, and he brings to mind iconographic images of Jesus as the man of sorrows.

This introduction could sink a less gifted director, but Almodóvar is a virtuoso of quicksilver changes and soon cuts to a young boy at a

river where women wash clothes and break into melodious song. Light and bright and shimmering with beauty, it is the first in a series of scenes from Salvador’s childhood scattered throughout the movie. Taken together, they create a wistful, emotionally vibrant counterpoint to the adult Salvador’s lonely, austere odyssey. Yet while they look like flashbacks, they’re closer to idealized reveries than to raw memories. (Asier Flores plays Salvador when he’s around 9; Penélope Cruz lights up the screen as his mother, Jacinta.)

A genre unto himself, Almodóvar has long drawn from his own history for his movies, most obviously with protagonists who are filmmakers. (He calls “Pain and Glory” the final installment in a triptych that includes “Law of Desire” and “Bad Education.”) In “Pain and Glory,” Almodóvar’s home doubles for Salvador’s; Banderas wears some of the director’s clothes and has similarly styled hair and beard. These teasing biographical gestures blur the line between reality and representation, but to see this movie as confessional would miss the point. The point is the blur, that in-between space where art blooms.

Banderas’s melancholic presence and subtle, intricate performance add depth and intensities of feeling both because he draws so flawlessly from Almodóvar and looks wrung out, with little of the feverish intensity evident in even their recent collaborations. (This is the eighth movie they’ve made together in the last four decades.) With his downcast eyes, sagging posture, silences and self-imposed isolation, Salvador looks like a man in retreat. He would be a figure of pure pathos if it weren’t clear that Salvador also suffers from acute vanity. When a friend asks what he will do if he doesn’t make movies, he says, “live, I suppose,” quickly lowering and raising his eyes, like an actor (or coquet) checking the reaction to a killer line.

Salvador’s crisis is real, but its performative quality is a relief; it lightens the heaviness and gives you permission to laugh. “Pain and Glory” can be achingly sad, but its pleasures, rainbow hues and humor keep it (and you) aloft. For a depressed man, Salvador still puts on a lively show, wearing splashes of color. Like his exquisitely appointed house, his clothing reminds you — as does Almodóvar’s staging of many conversations — how we turn ourselves into performers, our homes into theaters, the world into our audience. The problem with Salvador is that somewhere along the line, as a visitor suggests, his home became a museum. It might as well be his mausoleum.

How do you come back from the dead? For Salvador, the answer comes in fits and starts, in the burnished images of his childhood, in an old lover’s passion, in the power of art. It also comes in his love for Jacinta, who as an older woman (Julieta Serrano) nearing death, voices distaste for autobiographical fiction, telling Salvador he wasn’t a good son. It’s clear why: He grew up, lived his life, fell in love with a man, became an artist. His choices were as unforgivable as they were inescapable. But Salvador listens, and he apologizes. And then he takes the messiness, the vibrancy and the sensuous pleasures of life as he remembers it and turns his pain — and hers — into glory.

Rated R for language, recreational drug use and remembrance of debauches past. In Spanish, with subtitles. Running time: 1 hour 53 minutes.