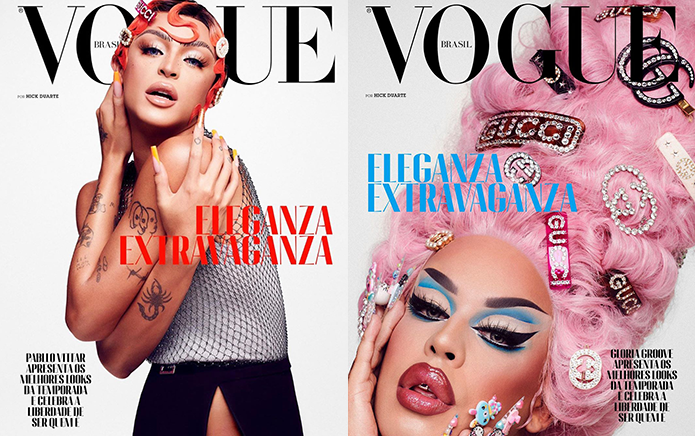 Pabllo Vittar and Gloria Groove have just made HERstory as the first drag queens to cover an edition of Vogue.

The Brazilian drag superstars are the cover girls for the next issue Vogue Brasil, both photographed by Hick Duarte.

Pabllo, who was recognised with the first ever GAY TIMES Honour for Drag Hero last year, boasts the largest social media following of any drag queen in the world and has received over one billion views on YouTube for her music.

She also became the first drag queen to receive a Grammy nomination and win an MTV Award.

Gloria is an accomplished singer-songwriter and will be the host of Netflix’s upcoming drag reality show A Queen is Born. The series, which is

expected to premiere in November, will follow the entertainer as she transforms baby drag queens into professionals.

“I came in the car researching Vogue’s iconic covers and absorbing the fact that now it is my turn,” Gloria said in the interview. “I am living a dream and I am thrilled with the invitation because being here positions drag queens as fashion icons.”

Pabllo said: “I want, I can, I can do it. I always knew I was going to get where I am. It is not wrong for you to love yourself, to take care of yourself. People will have to learn to respect you for who you are.”