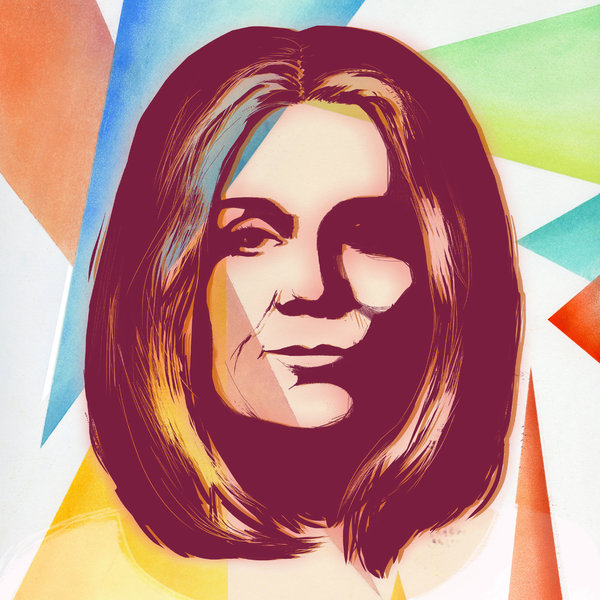 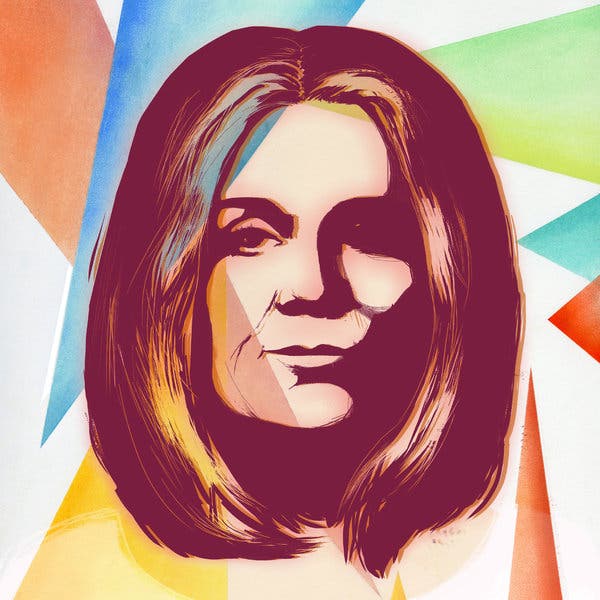 Do not bother to call. She’s planning to celebrate in Botswana. “I thought: ‘What do I really want to do on my birthday?’ First, get out of Dodge. Second, ride elephants.”

Very few people have aged as publicly. It’s been four decades since she told a reporter, “This is what 40 looks like.” Back then many women, including Steinem herself, fudged their age when they left their 20s, so it was a pretty revolutionary announcement. A decade later she had a “This is what 50 looks like” party at the Waldorf for the benefit of Ms. Magazine. Steinem, who has frequently said that she expects her funeral to be a fund-raiser, has been using her birthdays to make money for worthy causes ever since. Before heading off to Botswana, she, along with Rabbi Arthur Waskow, was feted at a “This is what 80 looks like” benefit for the Shalom Center in Philadelphia.

Ever the positive thinker, Steinem composed a list of the good things about starting her ninth decade. A dwindling libido, she theorized, can be a terrific advantage: “The brain cells that used to be obsessed are now free for all kinds of great things.”

“I try to tell younger women that, but they don’t believe me,” she said in a pre-Botswana interview. “When I was young I wouldn’t have believed it either.”

Her famous hair is colored, but otherwise, there’s been no outside intervention. She likes to recall a friend who proudly reported having rebutted the feminist-got-a-face-lift rumors by announcing: “I saw Gloria the other day and she looked terrible.”

Actually, she doesn’t look terrible at all. She looks great. She looks exactly the way you would want to imagine Gloria Steinem looking at 80.

Steinem occupies a singular place in American culture. In the 1960s and 1970s, the whole concept of women’s place was transformed — discrimination was outlawed, hearts and minds were opened. In the history of our gender, this might have been the grandest moment. There were all kinds of reasons that the change happened at that particular time, and a raft of female leaders who pushed the movement along. But when people think about it, Gloria Steinem is generally the first name that pops up. She’s the face of feminism.

“It’s a big gift to be recognizable as part of something that matters to people, but that’s not the same as being responsible for something,” she said mildly.

There are two reasons that Steinem turned out to be the image of the women’s liberation movement. One did indeed have to do with her spectacular physical appearance. For young women who were hoping to stand up for their rights without being called man-haters, she was evidence that it was possible to be true to your sisters while also being really, really attractive to the opposite sex. (An older generation tended to be less enthusiastic. The Washington Post columnist Maxine Cheshire once called her “the miniskirted pinup girl of the intelligentsia.”)

“I think for her as an individual, in one sense aging has been a relief,” says her friend Robin Morgan. “Because she was so glamorized by the male world and treated for her exterior more than her interior.”

But the interior always mattered. The other thing that made Steinem unique was her gift for empathy. Women who read about her or saw her on TV felt that if they ran into her on the street, they would really get along with her. And women who actually did run into her on the street felt the same way. More than a half-century into her life as an international celebrity, she remains stupendously approachable, patient with questions, interested in revelations. When she goes to events, young women flock around her. All celebrities draw crowds, of course. The difference is that when Steinem is at the center, she’s almost always listening.

Ruchira Gupta, a journalist and activist, recently toured India with Steinem to publicize “As if Women Matter,” a collection of Steinem’s writings repurposed for an Indian audience. The lines of people wanting to take pictures, ask questions and share stories overwhelmed Gupta, who is 30 years younger. “I would say: ‘I can’t do it, Gloria. This is too much. Why are you giving so much time?’ ” Gupta recalled. Steinem, she said, told her: “This is the only opportunity you might have for human contact with this person. So how can you not engage?”

Steinem still spends most of her life on the move. (The word “still,” she said wryly, now has a tendency to enter into conversations with some regularity.) Today Botswana, tomorrow India, Los Angeles a week from tomorrow. Gupta says there are new invitations for book tours in Bhutan and Bangladesh. Steinem has never taken up sports and gets her exercise, she says, “just running around airports and cities.”

MOST of what she does involves moving the movement forward. Speech to meeting to panel to fund-raiser. She frequently travels alone but it’s not lonely, she says: “On the plane I have my flying girlfriends, who are called flight attendants.” (Flight attendants play a large role in Steinem’s life. Sometimes they get her first-class meals when she’s flying coach. We will now stop to contemplate the fact that Gloria Steinem is 80 and still flying coach.)

She has a network of friends around the world, some of whom she has known from the early days on the barricades. “I’ve noticed that we all of us sort of cling to each other more,” says Robin Morgan. “We say ‘I love you’ at the end of conversations. We call to say, ‘It’s very cold out — did you wear an extra scarf?’ There’s a lot of tenderness.” 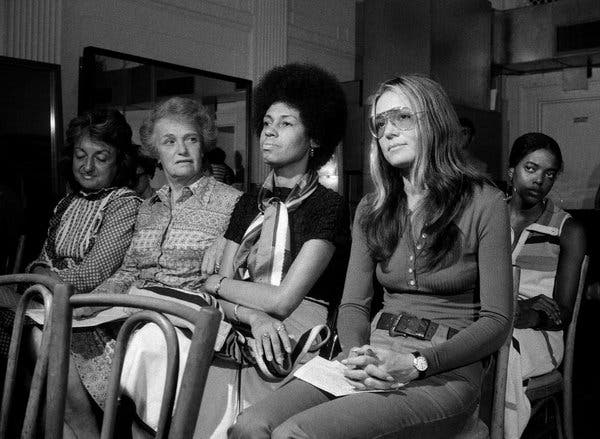 Her intimate circle is mainly female. But in her good-things-about-80 list, Steinem wrote about the advantages of turning former boyfriends into friends: “Your old lovers get to be your really old lovers, and you can’t remember who broke up with who, or who got mad at who — just that the two of you remember things that no one else in the world does.” But she’s not planning on adding to their number. Recently, she recalled, she met a young man in her travels and thought, “If I was younger, we’d have had a great passionate affair for two years and been friends the rest of our lives.”

It wasn’t a wistful thought, she says. It was an observation. “I didn’t regret it. That’s the advantage of shifting hormones.”

She has no bucket list of unvisited countries. Asked if there are any people she’s always wanted to meet, she pauses, thinks for a while, and suggests Marleen Gorris, a Dutch film director, and Sven Lindqvist, the author of a book on genocide. Many women, if stumped, would just blurt out something like George Clooney. “That’s funny you mention that,” she said. “I just talked with George Clooney yesterday.”

Age is definitely on her mind. When she was in her 20s, Steinem tried to get publishers interested in a project called “The Death Book,” which she planned as a compendium of “great stories and last words and other anecdotes about dying” that would help readers cheerfully come to grips with their own finale. “Needless to say, I couldn’t sell it.” Now she’s seeing the issue on a more immediate basis.

“Fifty was a shock, because it was the end of the center period of life. But once I got over that, 60 was great. Seventy was great. And I loved, I seriously loved aging. I found myself thinking things like: ‘I don’t want anything I don’t have.’ How great is that?” But, she added, “80 is about mortality, not aging. Or not just aging.”

IT’S a challenge she’s actually wrestled with before. One of the interesting things about being Gloria Steinem is that so many of her casual musings are transcribed by reporters. It turns out that on her 70th birthday she told Time, “This one has the ring of mortality.” Obviously, she got over that and it’s very easy to imagine Gloria Steinem being interviewed at 90 and saying that turning 80 was stupendous, but now it’s time to get seriously serious.

That last — Steinem’s longstanding battle with writer’s block — weighs on her. She’s been working for more than a decade on a book about life on the road, and it has resisted all her efforts to get it finished, including four stints at a writers’ colony. When asked whether she has any regrets, Steinem says: “Well, actually it’s not so much what I would have done differently. It’s that I would have done it much faster.”

Steinem has always been such a positive cheerleader for the future that we really do expect, on one level, to hear her come up with some strategy for standing up to mortality. She’s always had a victory in mind, a vision of a better tomorrow where there would be no hierarchy of gender or race or income, where life flows as seamlessly as it seems to do in the stories she tells about the early Iroquois or Cherokee.

You do sort of count on her having a plan for the next stage. “We’re so accustomed to narratives, we expect there’s going to be a conclusion, or explanation or answer to the secret,” she said. “And probably the answer is, there isn’t.”

But there’s always an elephant to ride.

Flowers of the fairest: How to plant a Mary garden

2020 Daily Trail Markers: The Iowa caucuses, in all their weird glory