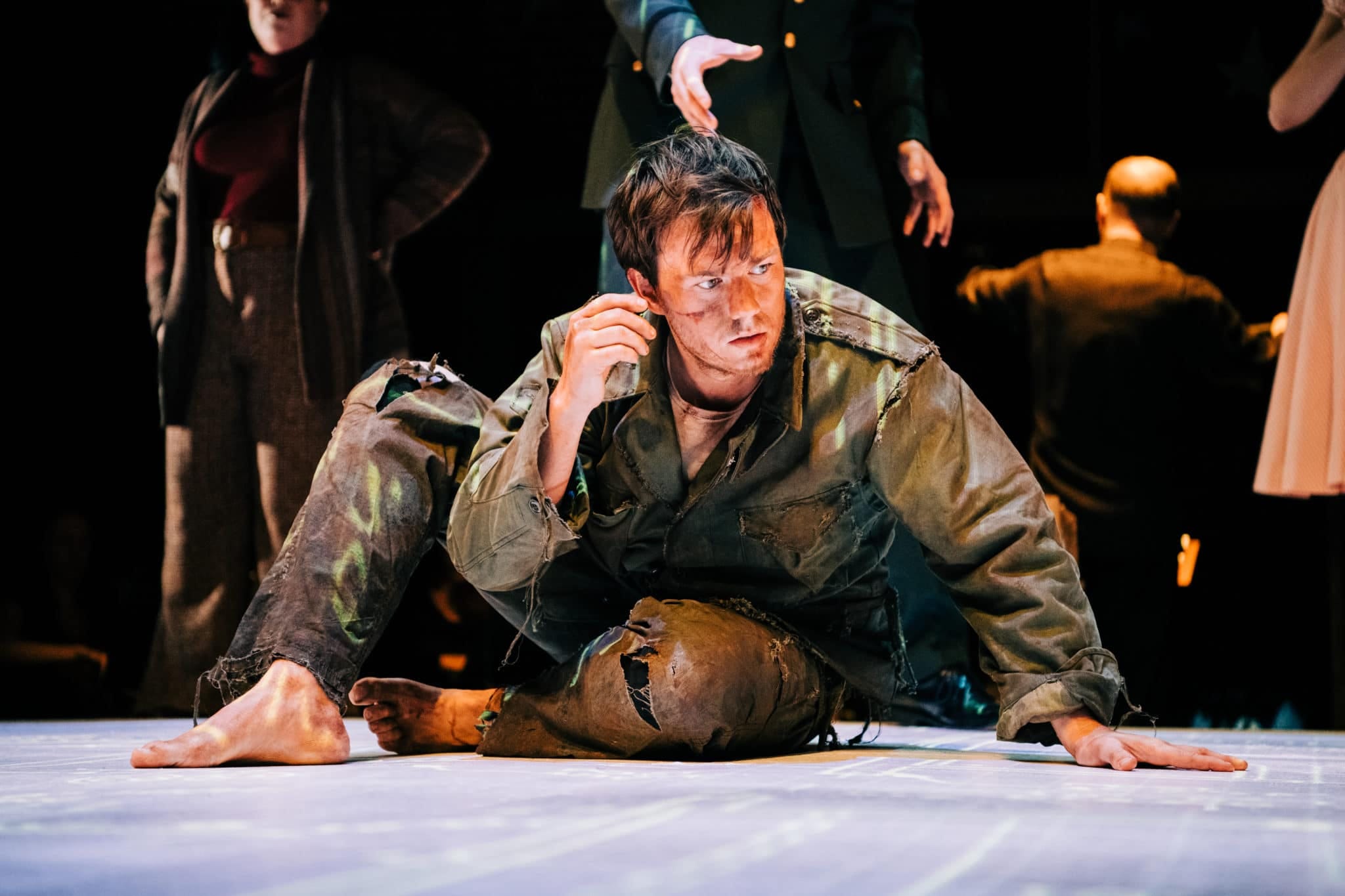 For many of us in the audience of UrbanArias’ new production, Glory Denied, the Vietnam War is not distant history.  Like the characters in this opera by Tom Cipullo, we carry that war inside us and move back and forth seamlessly but relentlessly between our current feelings and memories of who we were and how we saw ourselves and others in that complicated and charged time. There are lessons to be learned from those times and how we dealt with events as we look out on today’s landscape.

Robert Wood opened his first season as Artistic Director of UrbanArias in 2011 with Glory Denied in rep. I did not manage to see the production, but it seems for political and artistic reasons, this is a very good time to revisit the work. 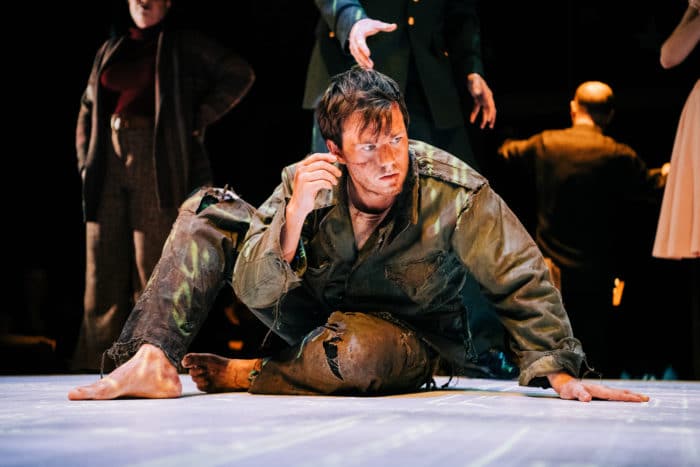 Tom Cipullo based his opera on reading Tom Philpott’s memoir, Glory Denied: The Saga of Jim Thompson, America’s longest held POW. The opera, like the book, dispenses with any chronological account, and instead demonstrates how war creates broken people of those who do the fighting in faraway lands and those whose battles are internal and at home. We follow, half in stunned disbelief, how Jim survives his harsh captivity (in great part by escaping into memories of his wife,) but the greater struggle comes when, finally home, how he has to face a changed world and reconcile what has been in his imagination with reality. We also come to know Alyce, his wife, and her life as a wife of a military man in an age of such social turmoil trying to raise four children alone.

The choice of a bare raked platform with floor and panels on either sides of the stage providing surfaces for projections serve the work well. We get footage of prisoners being escorted by Vietcong, bamboo lashed together as human “cages,” and Southeast Asian jungle foliage. Then periodically juxtaposed, the action is transported by “scenes” of very orderly tendrils and fronds of tidy wallpaper, images of giant American flags waving, and family 8-millimeter movies from the early 60’s.

With these, stage director Kristine McIntyre has kept the story-telling as fluid as possible. Although written in two acts, she quite rightly, I think, has chosen to align the work into one seamless and dizzying trajectory.

Cipullo chose to make his opera with two Alyces, the Younger Alyce and the Older but also two Jims, enabling classical compositional choices of soprano, mezzo, tenor, and baritone. McIntyre keeps the characters on stage most of the time so they are all relating to each other, pushing and challenging one another and at other times just looking back at themselves. Is the younger Alyce a real person or is she what the Younger Jim wants to remember? Is the Older Alyce who she always was? Or is this what the war has done to her – made her angry, guilt-ridden, and often coarse but also a woman who demands to be seen for who she is, not idealized? 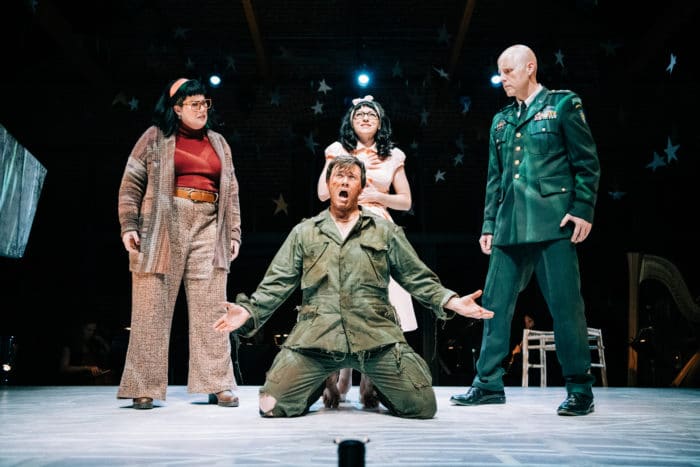 Caroline Worra and Cree Carrico are marvelous singer-actors. Both have performed their roles in other productions of this opera and bring great depth of emotional understanding to their characters.

Carrico casts out the notes of her part – the high fast lines with plenty of tricky intervals and rhythms thrown in – with seeming effortlessness and delivers a consistent bell-like sound, truly living in Cipullo’s sound world. Costume designer Grace Santamaria has caught her forever pregnant in a pink crisp shirtwaist dress with a bow in her flipped-do hair. Carrico made me believe and feel for this sweet, if naïve, young wife of a military man who went off to serve in a war in a country she didn’t even know where it was.

Worra as Older Alyce delivers a powerhouse performance, not afraid to swoop down into a dark sound and

likewise reveal the character’s not so sympathetic moments. Her aria “After You Hear Me Out” in the second half of the show, when she gets to confront the stranger who has come home wanting her to be “just the way she was” then, was truly revelatory and heartbreaking and Cipullo had wisely scaled back the orchestral forces to let her shine. I so believed in the character I got angry with her when she compares her struggle with what her husband has endured, but I also felt her deep hurt in thinking she always came in second to the Army, something Older Jim confirms to her face.

The interaction between the two Jims was a little more slippery and complicated especially in the first half. While I accepted Older Jim stepping in to play a Vietcong prisoner guard and torturer, it wasn’t always clear if that was what was intended or memories of his older self. Was it intentionally confusing that he seemed both a US military officer as well as Jim’s enemy torturer, or was it his own voice over his shoulder toughening him to survive? Through it all the Younger Jim burrowed deeply into the hellish experience of being a captive in a two-by-two-by-five bamboo cage.

John Riesen as the Younger Jim went the distance to portray the fear, humiliation, and pain of the soldier’s harrowing nine-year ordeal. Opera is a great medium for showing people in emotional extremis, and Riesen knows how to deliver vocally that kind of tenor heartbreak.

Timothy Mix was outstanding. He carried both the stiffness and pain in his body of a POW and showed the haunted eyes and outlier mask that I have seen in my half-brother (a Navy SEAL in that same war.) His performance made me weep. His aria on his return, “Welcome Home,” which Cipullo had crafted with just a list of words that he delivered with dizzying speed, captured the culture shock of returning to a country no longer recognizable. Accompanied by fast-flipping images of fashion and iconic news events (times-are-a-changin’,) Mix delivered in that one song the emotionally overwhelming experience that all of us felt coming back from Southeast Asia to the good ol’ USA during that period.

The music is complex and layered. There are beautiful passages that open up and have an almost Aaron Copland feel. In these moments we can rest there and absorb the richness of Cipullo’s craft.  (Conductor Wood takes time with these rare moments, and we are grateful.) At other times, the emotionality of the music gets so cranked up, the sound layering becomes so dense, and the solos pushed so quickly into quartets that their words, like their journeys, compete and get jumbled. Powerful aurally, emotionally justified, but it taxes. Also the company is in a new venue, Keegan space on Church Street, and bouncing around the brick walls, the soprano range occasionally gets distorted and it’s hard to get all the words.

Wood has always had a special affinity for working with the fine Inscape Chamber Orchestra. For this performance, he has never driven the nine-person ensemble with greater energy and sure headlong pace. But then he pulls back to let the piece breathe. I would wish there might be more such moments.

Wood has brought together a terrific team of singers, musicians, designers and director, and never a better production has been produced by this strong, lean and exciting contemporary opera company. Glory Denied is a piece that had me riveted to my seat, unable to clap or break the mood but only gasp silently.

Go to see one of the only three more performances this weekend. Jim’s and Alyce’s story will break your hearts.

How many ways? on Vimeo