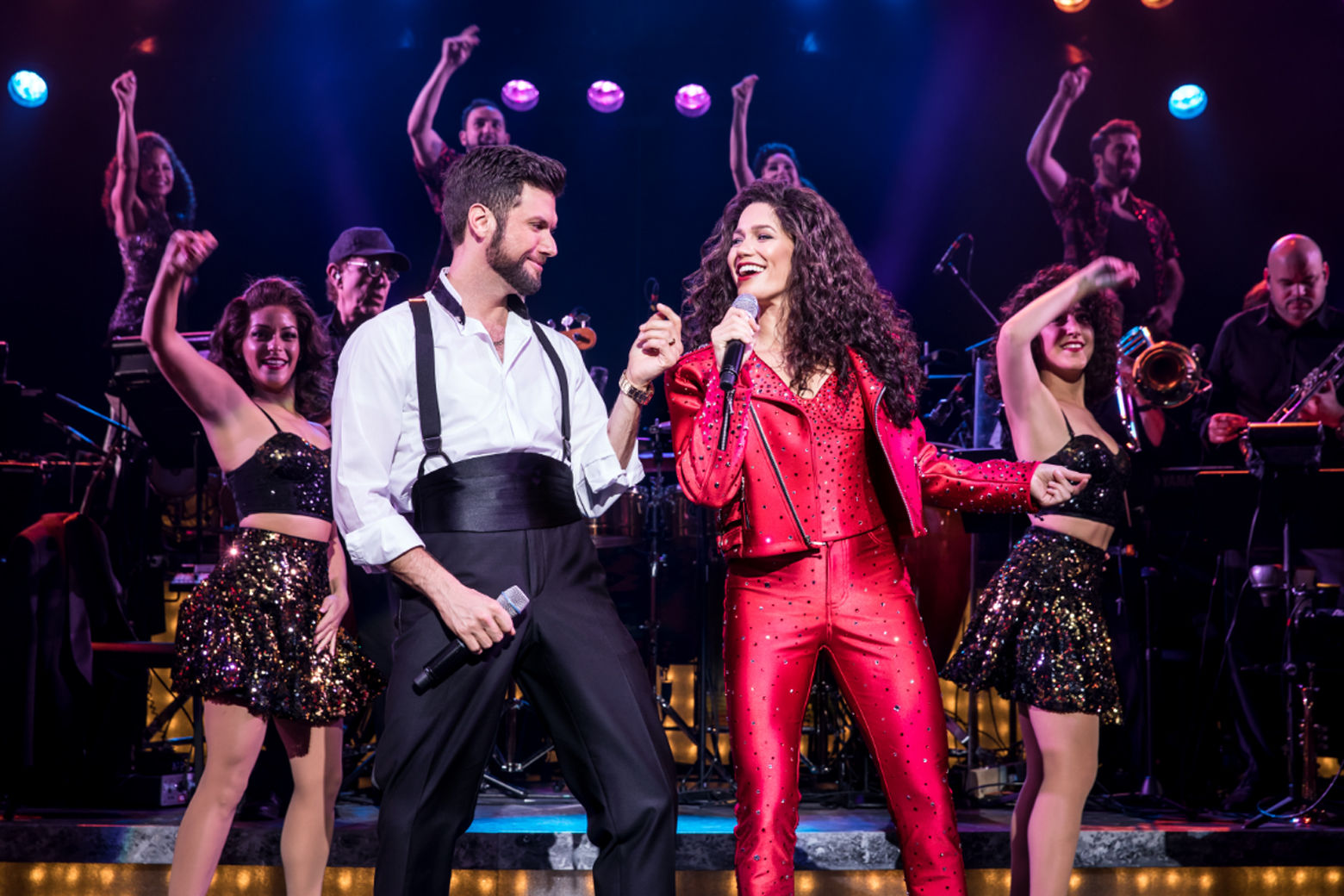 Actress Christie Prades says Gloria Estefan’s “rhythm is gonna get you” in this Kennedy Center musical.

WTOP’s Jason Fraley reviews ‘On Your Feet’ at Kennedy Center (

“It was definitely a dream come true,” actress Christie Prades told WTOP. “What was really funny [was] we had a dress rehearsal before in the morning in the dark and I actually hit my head so hard about three hours before having to go on! So I was actually in the hospital two hours before the performance. It was like ‘Carrie’; I was bleeding, people were freaking out like, ‘Is she able to perform?’ And I said, ‘Even if I don’t get cleared, I’m going on that stage.’”

Now, Prades has not only recovered but is absolutely electrifying on stage, as “On Your Feet!” brings its national tour to the Kennedy Center (Jan. 9-28) with a rhythm that’s gonna get you.

“The audiences are loving it and we feel so welcome to be telling this story now more than ever,” Prades said. “We just need that reminder of fulfilling any type of dream, any possibility, any re-inspiration that people need. This story is the perfect example of that. Whether you are Latino or whether you’re from somewhere else, it’s a story that unites and brings us together in the reality that we all have a dream and we have that possibility in this incredible nation.”

The story follows Gloria (Prades) and Emilio Estefan (Mauricio Martinez) from their humble beginnings in Cuba to arriving in America to form the Miami Sound Machine, breaking social barriers to become a crossover sensation that won 26 Grammys for their Latin-pop music.

“Gloria Estefan and her family escaped the Castro regime back in the ’50s when he took over from President Batista,” Prades said. “It definitely gives a beautiful [overview] of her entire life, from a young girl, to 17, to her 30s, to her bus accident, and all the way to her comeback.”

Her journey quickly becomes a love story with manager Emilio, sparking fireworks with a kiss.

“She met Emilio when she was 17,” Prades said. “He had a band called the Miami Latin Boys. … He was also a Cuban immigrant who came around age 12. He heard this girl wanted to sing in a band and he wanted to see what she had. … You see how their love unfolds, how they met, and the rest is history. They worked hard to cross over from the Spanish to the English market, which, back then, was unheard of. They were pioneers for so many Latin artists.”

The crossover appeal resulted in a catalog of tunes that we can all sing and dance by heart.

“There’s so many songs that we don’t realize Gloria, Emilio and the whole band actually did until you come to the show and you’re like, ‘Oh wait, I know that song! And that song! Oh my god, she sings that?’ We have ‘1-2-3,’ ‘Anything for You,’ ‘Conga,’ ‘On Your Feet.’ She does a lot of remakes, ‘Turn the Beat Around,’ ‘Everlasting Love.’ … Even the songs that weren’t blasting on the radio back to back, you remember them [and] you definitely get a nostalgic feeling.”

The songbook also features a brand-new original song, “If I Never Got to Tell You,” with lyrics by Gloria and music by her daughter Emily. In fact, it was Emily who saluted her mother at the Kennedy Center Honors with a rendition of “Reach,” which also makes its way into the show.

“The way Alexander Dinelaris wrote it, he put it into the show so perfectly,” Prades said. “I’m not going to say how, but everything he interpreted as far as the story line with the songs, he did it so well. You would think each song was created when that scene was happening.”

“The dancing and crazy tricks are so authentic,” Prades said. “He actually went to Cuba before creating the choreography [to] see the culture, movement and people. … There’s

one called ‘Cuba Libre’ [where] the dancers come out in wooden sandals, or chancletas, that are very loud. It’s a step number with a lot of energy, spice and yelling. It’s a very prideful dance.”

This catchy choreography is paired with vibrant backdrops and a flashy lighting presentation.

“You see the Cuban flag and American flag,” Prades said. “We have a lot of panoramas where you see very concert-like photos. You see these huge pictures as if in a concert with audiences in the background cheering. You see pictures of me as Gloria on these [rectangular] panels that come out and are constantly changing. We have so many lights in this show. … The lights and panoramas are so bright, so out there, so colorful and in your face. It’s wonderful to see.”

Of all the collaborators, the most vital input has come from Gloria and Emilio themselves.

“She came to opening night,” Prades said. “They’re very well involved since the Broadway production and well into the tour. They want to make sure that the story is presented as authentically and real as possible. It’s close to their heart, so it makes them always come and check in. It’s a nice check on us, so we don’t lose sight of the story or lose sight of them.”

While they lend their expert advice, the Estefans have also been very approachable.

“What’s incredible about Gloria is she’s so down to earth, personable and normal,” Prades said. “Sometimes, we put these celebrities on pedestals of being not relatable or not like us, but what’s wonderful about Gloria and Emilio is that they’re so relatable. I feel like I’m talking to an aunt or uncle in my family. We’re both Cuban-Americans, so I definitely relate culturally.”

Growing up in Miami, Prades related to Estefan’s life experience.

“My mom was a huge fan and I remember seeing all the CDs, especially Gloria’s ‘Greatest Hits,’” Prades said. “My mom would always play it and say, ‘This woman is just like us, came from the same neighborhood.’ She is from the same neighborhood where I grew up in Miami. … She was always an example [of] accomplishing any dream that you have … I remember looking at her and being like, ‘I want to do that. I could do that. If she can do it, I can do it.’”

So, Prades studied communications in college and dabbled in film and music. After acting in a Miami production of “In the Heights,” she decided to move to New York City to take her shot.

“I got my butt kicked right and left with a bunch of reality checks but a bunch of growth,” Prades said. “Then, I heard about this Gloria Estefan musical that they were thinking about bringing to Broadway and I thought, ‘This is it. I don’t know how I’m going to do this, but I need to be in this show.’ … I actually auditioned for an ensemble role [and] Jerry was like, ‘I want you to come back and I want to see you as Gloria.’ I was like, ‘What?’ It was so surreal.”

After a few nerve-wracking callbacks, she finally got the call that she was cast in the show.

“They called me about three days later and said, ‘How would you like to make your Broadway debut?’” Prades said. “I just flipped my seat and called my parents first. … I became the first cover and the first swing [for Ana Villafañe]. It was such a dream come true to be there for about a year, then to be asked by [Gloria] to lead the first national tour — and here we are!”

Indeed, Prades’ journey is proof to audiences that the “American dream” is still possible.

“I see people’s reactions when we perform this,” Prades said. “We are refueling people again.”

Click here for more on “On Your Feet!” Listen to our full conversation with Christie Prades below: