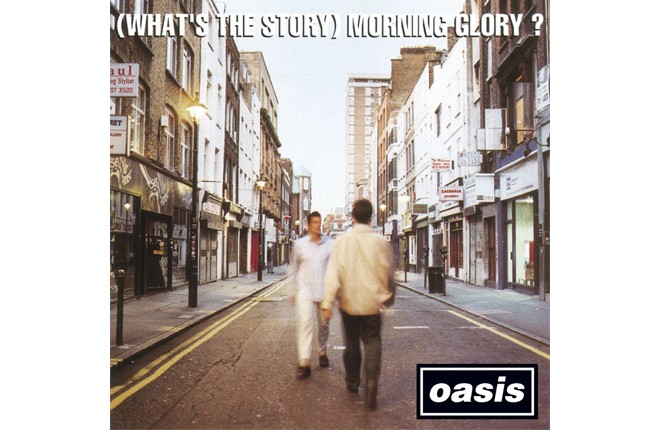 If fans (even the American ones) were on board, critics (especially the English ones) weren’t as keen. Many dismissed the album as a trite, unimaginative amalgam of obvious influences, among them the Beatles (of course) but also ‘70s glamsters and punks and ‘80s janglers and shoegazers. The naysayers weren’t wrong, but lack of inventiveness doesn’t make the music any less invigorating.

Morning Glory is a visceral rock n’ roll album whose finest bits are plundered wholesale from history and smashed together for maximum effect. Due to a mastering technique known as “brickwalling,” it’s an incredibly loud record that presents every instrument way up front and hits like a cricket bat between the eyes. Even the smash ballads “Wonderwall” and “Champagne Supernova” have a heaviness that makes guitarist and songwriter Noel’s dubious lyrics seem almost coherent and meaningful.

About those lyrics: Morning Glory arrived after Oasis hit the big time in their homeland, and despite what Noel has said in interviews, it doesn’t play like a reaction to fame. On the whole, the songs aren’t angry, celebratory, remorseful, bitter, or anything really. Noel’s thing is stringing together words that sound important and letting his kid brother sing them with that nasally, arrogant tone that ought to be off-putting, but for some reason isn’t.

Circa ’95, those looking for sonic experimentation and savvy social commentary were better off getting into Blur, Oasis’ chief rival during the Britpop era. Competition between the two bands reached its peak in August 1995, when both released singles on the same day. Blur’s “Country House” outsold the Gallaghers’ “Roll With It,” but both sides benefited from the publicity, and in the end, Morning Glory outperformed Blur’s The Great Escape.

Insofar as Oasis were working-class dudes from Northern England with none of Blur’s fancy London university credentials, the success of Morning Glory can be seen as a victory for real rock music — the kind not concerned with politics or class issues or even making a scrap of sense. But that’s reductive; Noel isn’t some buffoon who got lucky. He’s a student of rock music who writes melodies strong enough to compensate for his shortcomings, and after two decades, Morning Glory — his most accessible set of songs — stands as a genuine classic.

Read on for our track-by-track on the record that broke Britpop in America and made kids reared on Soundgarden and Nirvana consider a world beyond the Atlantic, and a time before grunge.

“Hello”: Back for album No. 2, the Gallaghers greet the world not with a warm smile, but with glam-stomp drums, savagely psychedelic guitars, and a rather unfriendly opening line: “I don’t feel as if I know you / you take up all my time.” “Hello” is about waving goodbye to life as you’ve lived it, and when Liam gets to the “we live in the shadows” part, the shift into Slade-like sing-along pop suggests he’s cool with how things turned out.

“Roll With It”: Some in the U.K. music press dismissed this single, calling it derivative, mindless, and insubstantial. Had they listened to Definitely Maybe? This is a big, hooky rock tune about ignoring critics and doing whatever you bloody well please. It’s the Oasis ethos in exactly four minutes, and it’s held up better than “Country House,” which topped the U.K. chart and signaled victory for Blur in the great Britpop chart battle of August ’95.

“Wonderwall”: Featuring one of the most memorable guitar intros of the ‘90s, “Wonderwall” is vague enough to mean lots of things to lots of people and sincere enough to make every meaning stick. As Mellotron rubs up under the music like a mournful cello, Liam lets himself sound uncharacteristically vulnerable: “Maybe you’re gonna be the one that saves me.”

Noel Gallagher Is Still Not Interested In an Oasis Reunion

“Don’t Look Back In Anger”: With a piano intro lovingly lifted from John Lennon’s “Imagine” and lyrics partially inspired by that Beatle’s revolutionary exploits, Oasis’ second U.K. chart-topper is a nostalgic, redemptive sing-along perfect for pubs and stadiums alike. Poor Sally’s soul is sliding away, sings Noel (who insisted on taking lead vocals), but you get the feeling she’ll be right as rain.

“Hey Now”: A muddled meditation on the passage of time and the perils of fame, this grungy rocker is perhaps the only song on Morning Glory not catchy enough to be a single. Liam is singing from a place of confusion, accepting some of the blame (“I asked myself why I can let anyone in”) yet remaining characteristically snotty and defiant (“feel no shame”).

“Untitled”: This fuzzy glam-blues inferno burns for 47 seconds, no longer than it needs to.

“Some Might Say”: The leadoff Morning Glory single gave Oasis its first No. 1 hit in the U.K. and marked the end for drummer Tony McCarroll, who was sacked after the recording and replaced by Alan White. It’s more faux-profundity from Noel and more sneering from Liam, who doesn’t really care about heaven and hell or brighter days or whatever spiritual nonsense Noel is writing about. As a wash of swirly guitar pushes the track forward, Liam is a passive observer, a bloke with a tick-infested dog and a sink full of dirty dishes.

“Cast No Shadow”: Noel wrote this sparkling blues-tinged ballad for buddy Richard Ashcroft of the Verve, and the specificity might account for why the lyrics and overall presentation ring so true. Noel isn’t really equipped to handle the big cosmic questions, but when he’s writing about a musician who has trouble saying what’s on his mind, he’s spot on.

“She’s Electric”: Comic relief after “Cast No Shadow,” this jaunty slice-of-life trifle about a guy who digs his girlfriend’s mum and sister but definitely (maybe) didn’t impregnate the cousin could’ve been a single for lots of other bands. It’s nice to hear some of the humor that Noel shows in interviews but seldom puts forth with his songwriting.

“Morning Glory”: With references to cocaine and the Beatles, this cavalcade of electric guitars (one playing a riff strikingly similar to the one in R.E.M.’s “The One I Love”) probably says a lot about what life was like for the Gallagher bros circa 1995. They were flying high in every sense — hence those helicopter noises at the start and finish.

“Untitled”: More fuzzy glam-blues burning, this time with ocean noises extinguishing the blaze. We’re splashing down in a sea of bubbly, bracing for the grand finale…

“Champagne Supernova”: How does one go “slowly walking down the hall / faster than a cannonball?” Best to answer that question with another question: “Where were you when we were getting high?” As Liam poses that query, former Jam leader Paul Weller adds sweet psychedelic guitar tones, pushing this dreamy ballad into “Hey Jude”/”Let It Be” territory.

How to Grow Morning Glories (with Pictures)