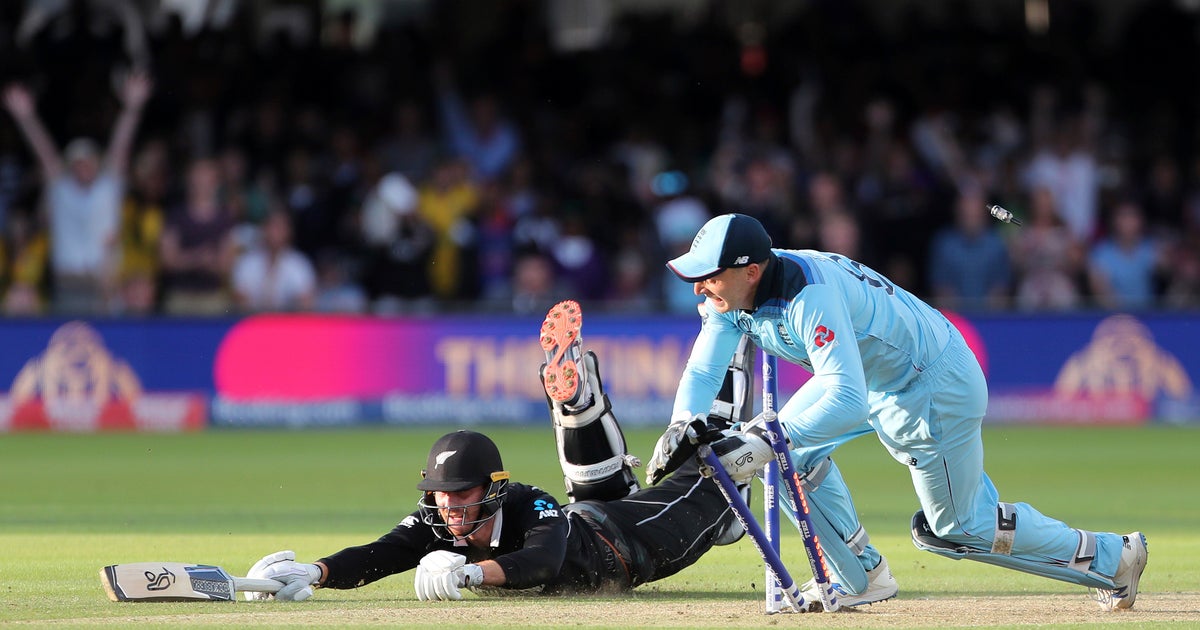 LONDON (AP) — Martin Guptill slumped to his knees, tears in his eyes. He’d just been sprinting, bat outstretched, and New Zealand’s first Cricket World Cup triumph was in his grasp.

But he was run out. Three measly meters short.

Teammates commiserated with Guptill as England players spilled contrasting tears of joy on Sunday at Lord’s, celebrating victory in an incredible final on a countback after the scores were tied in the regulation 50 overs and the deciding Super Over.

“We have showed heart and fight to get to this stage, and a tie in the final … it wasn’t meant to be,” captain Kane Williamson said.

“The guys are shattered. It’s devastating. Tough to swallow.”

Guptill’s World Cup mirrored New Zealand’s. He struggled to score runs — New Zealand and Afghanistan were the only teams not to post a total or 300 or more — and atoned with fearsome bowling and brilliant fielding. Guptill was a star in the field, pulling off perhaps the tournament’s best catch (of Steve Smith vs. Australia) and best run out (of MS Dhoni vs. India in the semifinals).

That still didn’t stop him from being the most heavily criticized player in the New Zealand squad. The highest run-scorer in the 2015 World Cup was expected to explode with more runs but sputtered on the soft English pitches. And, yet, in his and New Zealand’s second consecutive World Cup final, he found himself at the center of some of the game’s biggest moments.

Guptill was sent in to open the innings after Williamson won the toss and made the 50-50 call to bat first. Batting first has been a mantra at this World Cup, and the bat-first team had won all of the previous matches at Lord’s, but overcast conditions made England’s bowlers rub their hands in anticipation, too.

Guptill, to no surprise, lasted seven overs, out lbw on 19 to Chris Woakes. But he wasted New Zealand’s umpire referral on a plumb call.

Fellow opener Henry Nicholls hit 55, the first half-century by a New Zealand opener in nine matches, and had England sweating while batting with Williamson. But after the skipper edged behind on 30 and Nicholls was bowled moments later, Tom Latham’s 47 was the only other major contribution. New Zealand’s 241-8 didn’t look scary for a chasing team, but the Kiwis had defended 239 against India in the semifinals.

The Kiwi bowlers were outstanding, and unlucky with edges missing the stumps or falling short. Jason Roy was saved from a golden duck by the umpire’s call. Even so, England’s vaunted top order was all gone by the 24th over. The 107 dot balls England endured in the first 25 overs were their most since the 2015 World Cup.

New Zealand-born Ben Stokes and Jos Buttler brought England back with a century stand. Stokes appeared to be caught on the boundary in the 49th over but Trent Boult stepped on the boundary cushion as he tried to pass off to Guptill, who had no hesitation indicating a six.

In the last over, when England needed 9 off the last three balls, Guptill prevented a boundary but his throw for an attempted run out hit Stokes’ bat and deflected to the boundary, adding six runs in all to England’s total.

“A bit of a shame isn’t it?” Williamson said. “That’s the game we play. You can’t nitpick.”

The scores ended up tied, which prompted a Super Over. There was no hesitation sending out the big-hitting Guptill. And he was three meters short of being the hero.

A countback on boundaries hit — 26-17 — decided who took the trophy even though New Zealand lost two fewer wickets. Williamson wasn’t fazed. The rules were the rules.

“While the emotions are raw it’s pretty hard to swallow when two teams work so hard to get to this moment,” he said. “We had two attempts to separate us and still couldn’t – it is what it is, the rules are there at the start and they probably never thought they would have to use them.

“Someone had to walk away with the title and we’re gutted that it’s not us. England had a very good campaign and they deserve the victory.”

Williamson was named player of the tournament, his 578 runs the fourth highest in this World Cup, and the most by a captain in tournament history. But he said he would appreciate the accolade later.

His counterpart, Eoin Morgan, based England’s rebirth in the ODI game on the New Zealanders’ attacking play in the 2015 World Cup, and praised their fighting ability and attitude to almost derail four years of planning by England.

“We got the rub of the green today,” Morgan said. “New Zealand throughout the group stages were absolutely outstanding, very consistent. I think the most admirable thing is the way they played their cricket, to consistently perform and compete against the very best on different stages.

“They are the best, and they do it in a fashion that you’d have no qualms in turning around to your kid and saying, ‘Please idolize these guys, they are very admirable.’ They are.”

Free kindle downloads google books Someone Who Will Love You in All Your Damaged Glory: Stories PDF DJVU ePub 9781524732011