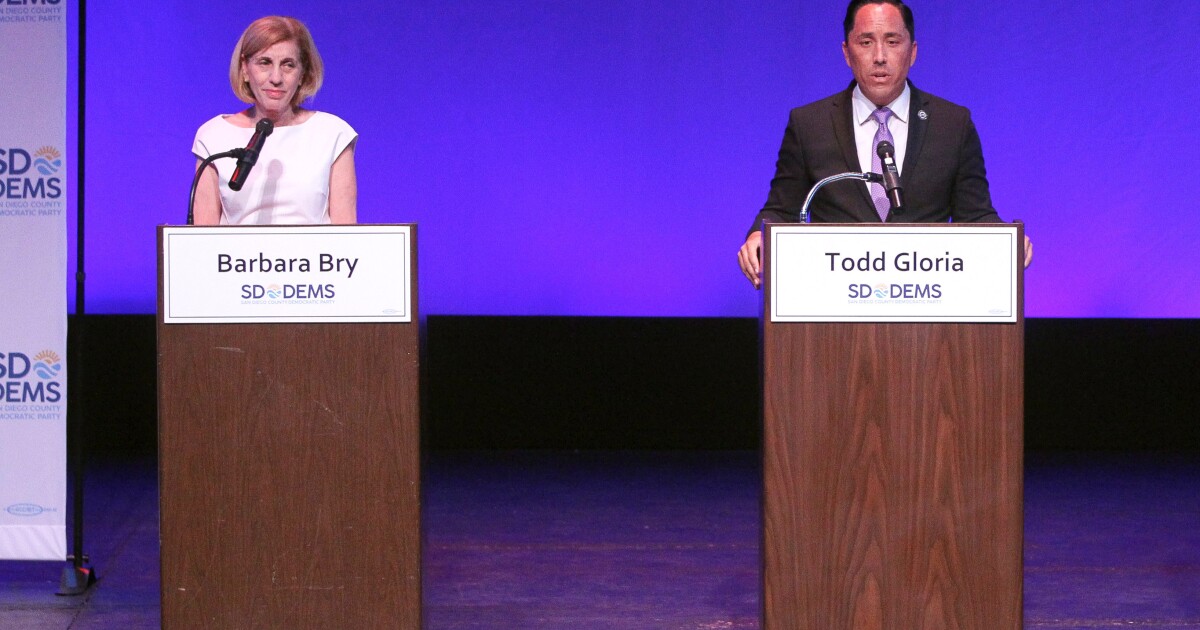 Assemblyman Todd Gloria and Councilwoman Barbara Bry are in a virtual dead heat among likely voters in the runoff for San Diego mayor, according to a San Diego Union-Tribune/10News SurveyUSA poll released Tuesday.

Gloria leads Bry 39 percent to 38 percent, which is within the poll’s 5.3 percent margin of error. That leaves nearly a quarter of likely voters still undecided, with mail voting already underway and Election Day on Nov. 3.

Gloria, who trailed fellow Democrat Bry 37 percent to 34 percent in a similar poll four weeks ago, has gained ground since then with young people, Latinos, Democrats and suburban voters.

While Bry has lost her small lead, she has gained ground since the last poll with women, Republicans, independents and voters ages 35 to 49.

The candidates are nearly even within every age group.

Beyond the mayor’s race, the poll shows challenger Cory Briggs shrinking the lead of incumbent Mara Elliott in the city attorney’s race by gaining greater support from Republican voters in the race featuring two Democrats.

Elliott leads Briggs 28 percent to 22 percent, slightly larger than the poll’s margin of error. One month ago, Elliott led 30 percent to 20 percent. In both polls, half of likely voters said they were undecided.

The new poll also shows a surge in support for Measure E, which would lift the city’s 30-foot coastal height limit in a targeted area surrounding the sports arena.

The measure, which needs a simple majority to pass, leads 37 percent to 25 percent. That 12-point gap is much larger than the measure’s 2-point lead in last month’s poll, but 38 percent remain undecided.

The poll brings discouraging news for supporters of Measure A, which would increase property taxes within the city to pay for $900 million in housing units for formerly homeless or low-income families.

While Measure A leads 38 percent to 33 percent, it’s far below the two-thirds approval needed for passage. Democrats support the measure by a wide enough margin for it to pass, but Republicans oppose it 52 percent to 36 percent, the survey said.

Prospects look far better for Measure B, which would strengthen the city’s police misconduct oversight panel. That measure, which needs a simple majority to pass, leads 53 percent to 21 percent.

The poll also shows strong support for Measure C, which would change San Diego Unified school board elections from at-large to district-by-district. The measure, which needs approval from a simple majority, leads 39 percent to 14 percent.

The poll surveyed 640 registered voters Thursday through Monday over landlines, smartphones, tablets and other electronic devices. The poll deemed 547 of respondents likely to vote.

SurveyUSA received criticism that its September poll included too large of a percentage of likely voters and not enough independents, raising questions about the poll’s methodology and accuracy.

In the new poll, likely voters dipped from 97 percent of registered voters to 85 percent. And the percentage of independents rose from 18 percent to 23 percent, closer to the roughly 30 percent of local voters who are typically independents.

Ken Alper, SurveyUSA president, said Tuesday that the percentage of likely voters went down because the company strengthened its screening of registered voters. He said no changes were made to boost the number of independents polled.

In the mayor’s race, Bry’s shift to the right on many issues appears to be helping her with conservative and independent voters.

She leads Gloria among Republican voters 46 percent to 24 percent, and among independents 46 percent to 27 percent. Gloria, who was endorsed by the county Democratic Party, leads among Democrats 53 percent to 29 percent.

Gloria, who trailed Bry among Hispanic voters in last month’s poll, now leads 45 percent to 32 percent in that group.

The poll doesn’t include a breakdown for Black voters because only 15 of the 547 likely voters surveyed were Black, which Alpert characterized as too small a number to be statistically reliable.

Bry appears to be having some success with her efforts to portray Gloria as the “business as usual” candidate and herself as an agent of change.

Gender appears to be playing a significant role in the race, but maybe not in a traditional way. Bry leads among men 45 percent to 34 percent, while Gloria leads among women 43 percent to 31 percent.

‘While at War,”http://www.upi.com/”Pain and Glory’ lead Goya Award nominations