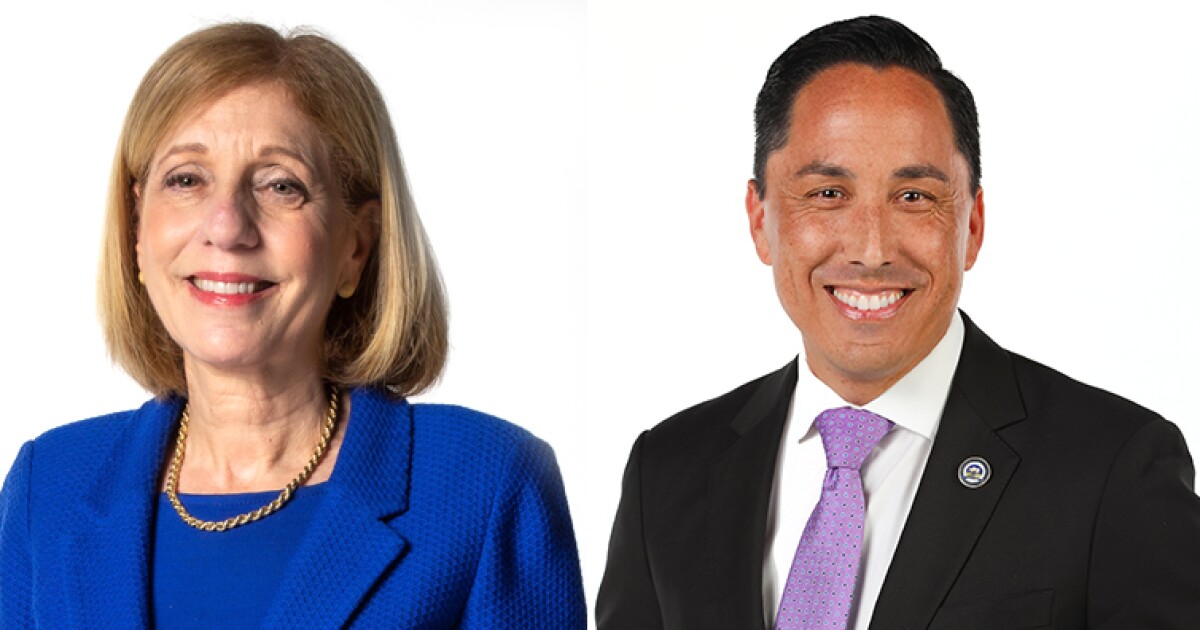 Councilwoman Barbara Bry and Assemblyman Todd Gloria have nearly even support among likely voters in their runoff to become San Diego’s next mayor, according to a San Diego Union-Tribune/10News SurveyUSA poll released Tuesday.

Bry, who finished 66,000 votes behind fellow Democrat Gloria in the March primary, leads Gloria 37 percent to 34 percent. But her lead is within the poll’s 5.3 percent margin of error, and 29 percent are undecided.

Bry’s support is strongest among conservatives, older residents and voters who disapprove of the performance of incumbent Republican Mayor Kevin Faulconer, who cannot run for re-election because of term limits. 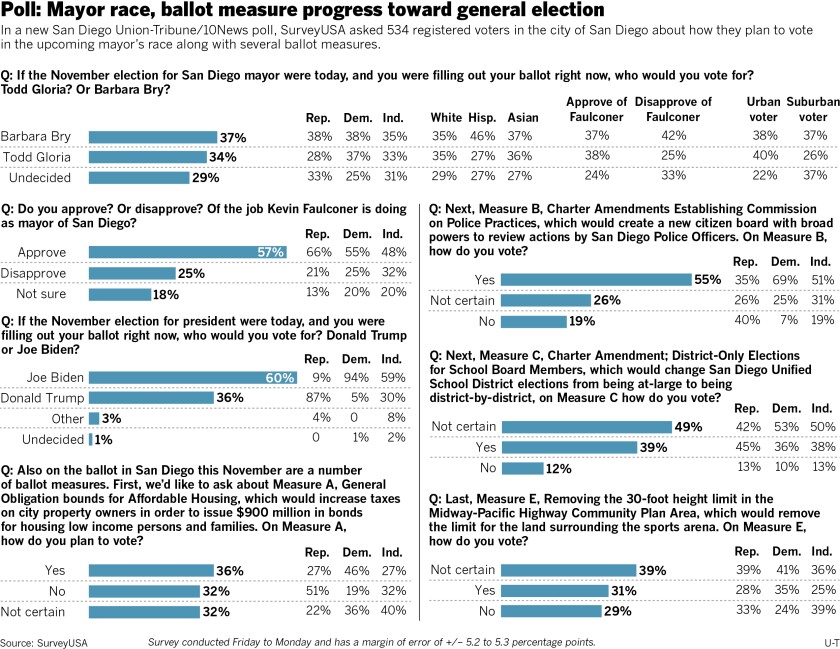 Gloria leads among people planning to vote by mail, and he is even with Bry among White voters, Asian voters and voters who are under age 50. But Bry, who is White, has more support from Latino voters than Gloria, who is Latino, Filipino and Native American.

Beyond the mayor’s race, the poll shows an uphill climb for a November ballot measure that would increase property taxes within the city to pay for $900 million in housing units for formerly homeless or low-income families.

While Measure A leads in the poll 36 percent to 32 percent, it is far below the two-thirds approval needed for passage.

Prospects look far better for Measure B, which would strengthen the city’s police misconduct oversight panel. That measure, which needs a simple majority to pass, leads 55 percent to 19 percent among likely voters.

Voters are split on Measure E, which would lift the city’s 30-foot coastal height limit in a targeted area surrounding the sports arena. The measure, which needs a simple majority to pass, leads 31 percent to 29 percent, with 39 percent undecided.

In the city attorney race, the poll shows incumbent Mara Elliott with a solid lead over challenger Cory Briggs, 30 percent to 20 percent, with 50 percent undecided. Elliott beat Briggs by more than 130,000 votes in the three-candidate March primary.

Elliott leads Briggs in nearly every subgroup surveyed. The only groups where he has stronger support are conservatives, people who plan to vote on Election Day and people who disapprove of Faulconer’s performance.

The poll surveyed 534 registered voters Friday through Monday over landlines, smartphones, tablets and other electronic devices and has a margin of error of 5.3 percentage points. The poll deemed 517 of respondents likely to vote.

Bry’s support among conservative voters may be the result of her taking more moderate positions than Gloria during the campaign on issues such as eviction protections and allowing dense housing in suburban neighborhoods.

Bry’s support from voters critical of Faulconer may be due to her criticism of the mayor’s management, particularly a deal to buy an asbestos-contaminated downtown high-rise that has cost the city many millions of dollars.

Gloria approved the 2016 deal when he was on the City Council, but he has said that many subsequent city decisions related to the building have occurred since the end of 2016, when Bry joined the City Council and Gloria left for the Assembly.

Among the 57 percent of those surveyed who approve of Faulconer’s performance, Gloria barely leads Bry 38 percent to 37 percent.

The connection between support for Bry and disapproval of Faulconer may also be related to Bry’s claims that Gloria’s broad support among local developers and labor unions signals that he will allow them to influence decision-making at City Hall.

Gloria says he has a broad coalition because of his track record as a leader who gets things done.

While the two candidates are even among White and Asian voters in the poll, Bry has a large lead of 46 percent to 27 percent among voters who describe themselves as Hispanic, who made up 18 percent of those polled.

Bry leads Gloria 42 percent to 35 percent among likely voters age 50 and older. The candidates are tied at 32 percent each among voters younger than 50.

Gloria easily finished first in the March primary, while Bry secured the second slot in the runoff only after late-arriving absentee ballots pushed her ahead of Republican Scott Sherman nearly two weeks after the primary.

Because Bry has positioned herself to the right of Gloria on many issues, she may be doing better with Sherman voters than Gloria.

The poll comes as both campaigns are gearing up to send out thousands of mailers and to roll out advertising efforts. Bry has raised significantly more money than Gloria since the primary, but he has more support from well-funded independent committees.

Measure A, the proposed housing bond, falls short of the two-thirds support needed in nearly every subgroup. The measure gets the necessary support only among those ages 18 to 34, and those who describe themselves as liberal.

Measure B, the police oversight measure, is supported by every subgroup except Republicans, Trump supporters and those who describe themselves as conservative.

Measure E, the proposal to lift the 30-foot height limit near the sports arena, is supported by Democrats 35 percent to 24 percent, but opposed by Republicans 33 percent to 28 percent.

The measure also does much better among males than females, which could be due to the height limit allowing construction of a completely new sports arena. Men support the measure 42 percent to 28 percent, while women oppose it 30 percent to 22 percent.

The poll also showed strong support for another ballot measure, Measure C, which would change San Diego Unified school board elections from at-large to by geographical district. The measure, which needs approval from a simple majority, got support from 39 percent of likely voters, with 12 percent opposed.

Morning Glory Seeds – On Sale Now…By The Packet Or In Bulk!