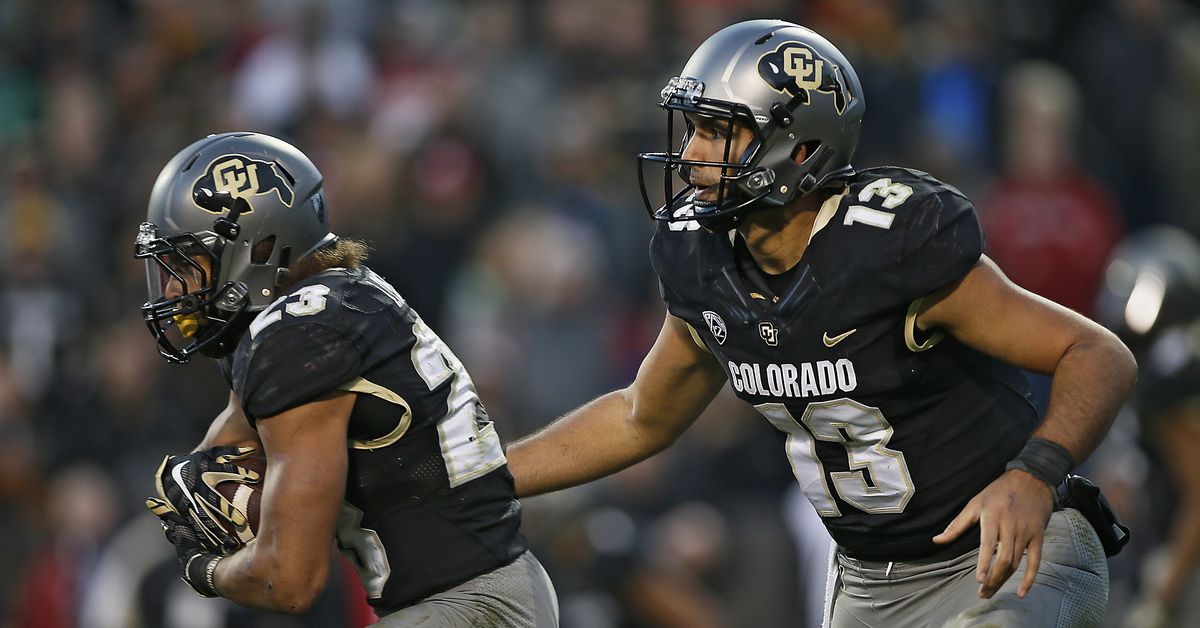 As I have written time after time, I was not around for the glory days of Colorado football. The first three games I ever attended went as follows: 30-3 loss to Nebraska, 14-10 loss to Colorado State, and a 34-21 loss to Kansas State (Josh Freeman vs. Bernard Jackson, my goodness I was excited). That pretty much set the tone for my early CU fandom. From 2005 to 2015, I attended around 15 games (?) and saw them beat only the Miami Redhawks and the Nicholls Colonels.

Nonetheless, 9-year-old Sam had hope that the Buffs would win every game they played. The Colorado roster featured only good players and great players; the good ones — Bernard Jackson, Dusty Sprague — would help the greats — Hugh Charles, Terrence Wheatley — pull off every upset. I thought of these guys as personal heroes, as those were the days I would tackle kids in YMCA flag football because I wanted to be Jordon Dizon.

As I grew older, I learned that rooting for Colorado football was going to end in disappointment. I could still root for an upset, but I knew better. No matter how many tackles Jeff Smart racked up, they were all 7-yard gains; no matter how many yards Rodney Stewart picked up, it wouldn’t be enough. I still idolized these players because even in a sure loss, they played hard and were committed to their teammates. Their perseverance was more important than the final score.

That was my Buffaloes fandom until 2016, when everything came together during The Rise. Suddenly those doomed heroes — almost all third- or fourth-year starters who were tired of losing — were winning those battles. The reason why that season was so special, besides the whole winning aspect, was because their mental strength was so easy to see. Sefo Liufau and Phillip Lindsay were absolute badasses who willed the team to victory. That defense played like their collective hair was on fire. All of those players were overlooked recruits who came to CU because a down-and-out program was their best offer, all of whom worked their asses off to become stars.

My favorite Colorado players have always been the overlooked recruits who put in the work, those who deserved to win (and usually didn’t) because they kept playing until the clock ran out.

This team can’t begin with anyone besides Sefo Liufau. Liufau was a godsend for a Buffaloes team that needed something, anything, at quarterback. His sophomore season, in which he threw for 3200 yards and 28 touchdowns, may be the best passing season in CU history. He had some ups and downs throughout his career to the point some terrible CU fans booed him, but he always withstood and bounced back. His 2016 season was an injury-plagued and he only threw 11 total touchdowns, but he was the heart and soul of that team. That was also the year Brian Lingren realized Sefo was a fullback with an arm, so he used him as such. I will never forget this play, which symbolized just how much of a hoss Liufau was:

Phillip Lindsay is as tough as they come, as everyone in Colorado knows by now. The chip on his shoulder defines his every move — he runs angry, he fights for every yard, and he talks all kinds of trash after running through your chest. It’s almost surreal, but hardly a surprise, that he’s an NFL Pro Bowler five years after barely making Jon Embree’s roster.

Another tiny and terrific running back, Speedy Stewart was a threat to score every time he got the ball, be it kickoffs, hand-offs or screen passes. We got to see a lot of him over his four seasons, as he was easily the most exciting player of the late Hawkins and early Embree days. It was almost like watching him was our reward for watching an otherwise moribund team.

I don’t remember seeing Lawrence Vickers play college football, but I knew of him through a certain mythology, I suppose. I saw people at Folsom wearing #17, my uncle told me who he was and what he did, and eventually I saw the clips of him mowing through people.

Paul Richardson put up 1,343 and 10 touchdowns with Connor Wood and freshman Sefo Liufau throwing to him. That’s all you need to need about how good he was.

Spruce put up ridiculous stats (195 catches for 2,251 yards and 16 TDs his final two seasons) despite being Liufau’s only reliable receiver. All Sefo had to do was throw the ball anywhere near Spruce and he would come down with it. That Cal game, in which he finished with 19 catches, 179 yards and 3 TDs, was the most dominant game I’ve seen from a CU receiver, even if it ended in defeat.

A highly touted transfer from Maryland, Winfree was always someone who would shine if given the chance. He was buried on the depth chart because of various injuries, but when he was healthy, he could torch a secondary.

I fondly remember Brady Russell as the local kid who walked-on to the program and became a practice cult hero. In all the position workouts, he stood out because he played with pop — every time he hit someone you heard it, every he caught a pass he would burst after the catch — all while his long hair flew around. It’s no surprise to anyone at those practices that he became a starter as just a sophomore.

Probably the best player I’ve ever seen in a Buffaloes uniform, Nate Solder was a consensus All-American and surefire first round pick. Seeing a great player was enough for me to adore them, as Colorado wasn’t exactly producing All-Americans at this time. (I realize know that this article is mostly me pointing at a good player on a bad team and fawning at the idea of a “good team”.)

Like Nelson Spruce, Stephane Nembot came and left one year too early. A massive man with quick feet, the Cameroonian tackle was a four year starter who grew so much over those years. It’s a really a shame he graduated after 2015, so he never got the reward of being on a great team.

Chris Naoele as the only players on this list I didn’t see play for CU. For me, they were all something like legendary players, a representation of a great program I never saw. I was able to watch and root for Gurode, but only when he was clearing holes for Julius Jones and Marion Barber. 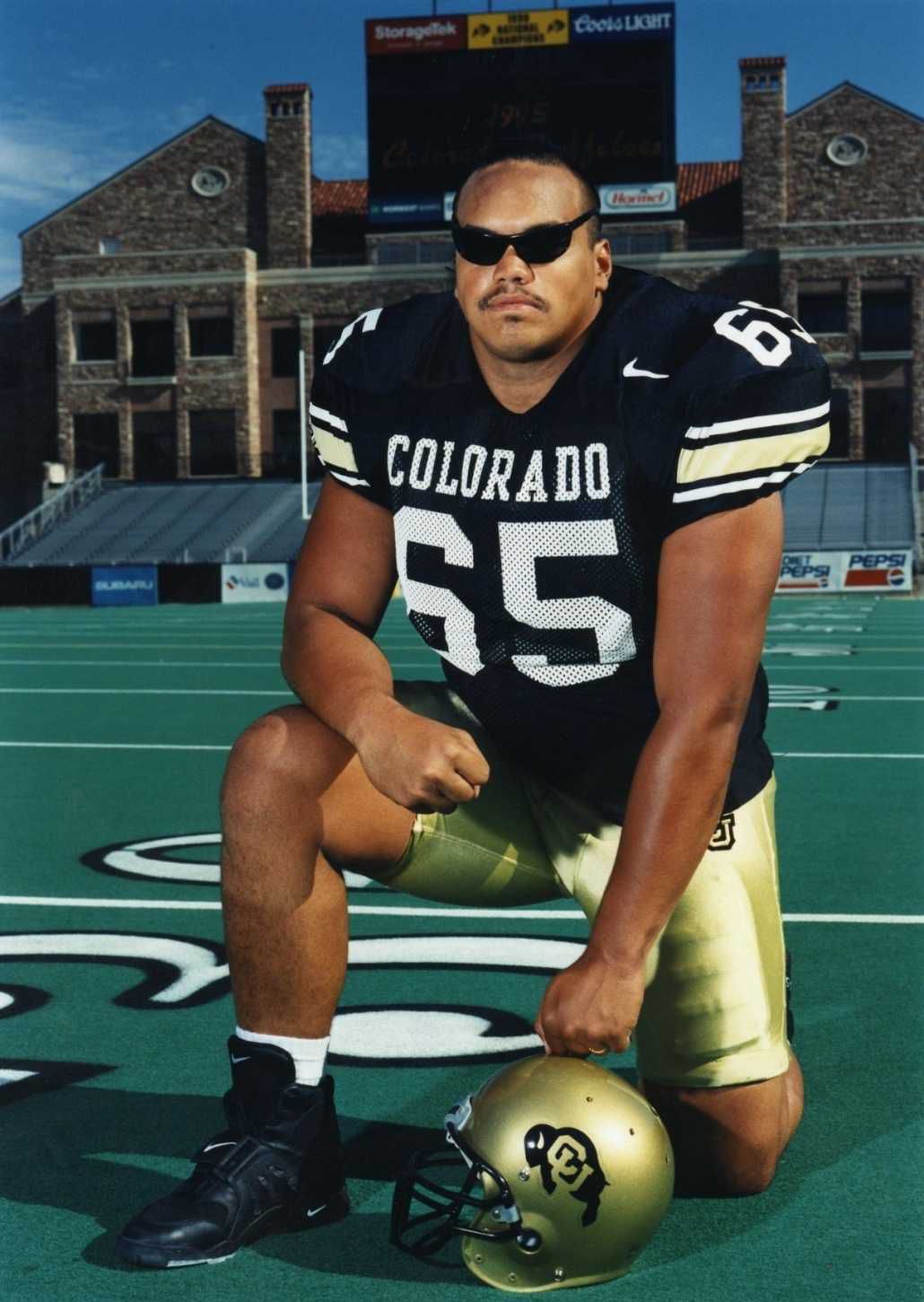 Not exactly the most talented player, Alex Kelley had a passion for the sport that was easy to appreciate. It helps that he was so consistent and that he somehow scored the first touchdown of the 2016 season.

Sometimes I wonder if we would view players like Uzo-Diribe the same if their teammates were better. We remember him as the best defensive lineman on some truly awful defenses, someone who deserved to be on the winning side. But if we moved him onto, say, the 2016 team, he might be remembered like Jordan Carrell, a solid player overshadowed by star teammates. Is it better to be remembered as a standout on a doomed team, or to be just another guy on a superb team?

Mustafa Johnson is as clutch as he is funny and he’s the funniest guy on the team. His performance against Nebraska in 2019 was nothing short of spectacular, as he had three sacks, all at key moments in the game, including the play that forced a long field goal in overtime. He was so good early in the season that Arizona State targeted him with cut blocks, ultimately injuring his ankle and not being the same the rest of the season. Hopefully we get more star play from him in 2020.

“Three Sexy” as he was known, Javier Edwards was a 330-lbs. nose tackle (after losing 60 lbs.) who wore a single digit number (love them) and played with a huge smile. He was solid, not great, but he’s beloved for his vibrant personality.

If you rack up 11 sacks and 6 forced fumbles for a superb defense, you will be remembered fondly. Jimmie did it as a rail-thin outside linebacker who just had a nose for the ball and a knack for the clutch play.

Everyone knows his story because every news outlet was written it: Davion Taylor didn’t play organized football until he was 18, due to religious restrictions, and now he’s a surefire NFL draft pick. Taylor was so fun to watch because he was a freak athlete learning the sport, so we got to see every step in his development from “he doesn’t know where to be” to “this guy might be our best player.” We really need a smart team to draft him, be patient and turn him into a star.

It’s a shame that Kenneth Olugbode will probably be remembered only as a supporting character on a star-studded defense. He was the centerpiece of that 2016 defense as the sideline-to-sideline linebacker who never made mistakes. His scoop-and-score touchdown sealed the win against Utah, the final game to win the Pac-12 South. He also wore the green mouthpiece along with Chidobe Awuzie and Afolabi Laguda, all to celebrate their Nigerian upbringing.

Jordon Dizon came to CU as a relatively unheralded recruit from Hawai`i, some RB/Safety who wasn’t very big or athletic. But scrimmages started and this freshman just started making plays all over the field. He just saw the game better than anyone, knew how to attack the ball carrier and always finished tackles. He started four seasons at linebacker, racked 440 total tackles, and finished his career as the Butkus runner-up and consensus first-team All-American. He was my favorite athlete in the world during his CU days and I still wear his #44 jersey to every game.

Besides Dizon, Chidobe Awuzie is probably my favorite ever CU defender. Likewise, Chido was an overlooked recruit who became a four-year starter, a playmaking defensive back who could shut down elite receivers, rack up tackles out of the slot, and even blow up quarterbacks off blitzes. My favorite play is his strip-sack against Michigan, but his points-saving tackle on a Utah kick return is underrated (1:56 of this clip).

Long live Espinoza Island. The 2011 Colorado Buffaloes were desperately thin in the secondary, so much so they had to convert Jason Espinoza to defensive back. Later in the season, injuries struck and the former walk-on receiver was starting games at cornerback. He performed admirably in an impossible situation, even picking off a couple passes, including an interception on Nick Foles that helped Colorado upset Arizona.

After Michael Lewis left for the NFL, the Colorado Buffaloes went 13 seasons without a great safety. With the exception of Ryan Walters, who was more solid than spectacular, I never saw a quality safety until Tedric Thompson became a star. Thompson’s 2016 season was arguably the single best performance of anyone on that team, as he had a CU-record 7 interceptions, a nation-leading 25 pass breakups, and many jarring hits to set the tone. He was named second-team All-American and CU’s Defensive MVP.

Darragh O’Neill never played on a good team, but that did mean we got to see a lot of the ambidextrous rugby punter. He was almost a consolation prize, like, this offense is awful but at least our punter is fun as hell.

Just in case you forgot Josh Smith existed, he did and he was really cool. He gets bonus points for being an “impact player” in NCAA Football 09.

It was a joke that MacIntyre couldn’t mentioned without being called the coach’s son. But all that really did was undersell just how important J-Mac was to the team. He was so solid as a returner, made a bunch of clutch catches, played through all sorts of injuries and was generally a great teammate.