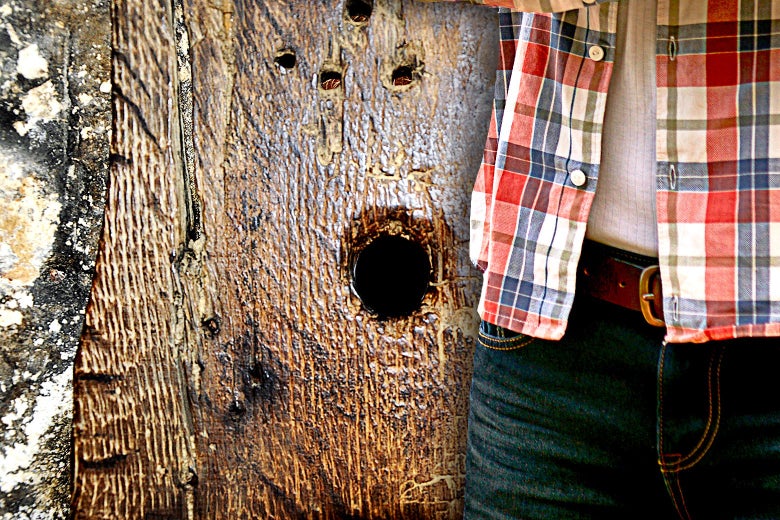 Public health officials and lonely quarantines have led to an unlikely sexual renaissance in the pandemic.

This summer, Jonah, a gay twentysomething in the D.C. area, was frustrated after months of the coronavirus lockdown. His sex life, as with so many others’, had been completely upended by the pandemic.

Then he stumbled on what seemed like a safer sex option: a glory hole.

Jonah found his glory hole—or a hole in a wall or other barrier between parties that allows for anonymous oral sex—through the sex and dating app Grindr. From there, he was directed to an online scheduling site that required minimal information. During his first time through, he received written instructions on where to meet, along with a helpful reminder of the time.

When he arrived at the station, he saw a wide partition with a gap in it. “It was unlike any other experience that I’ve ever had,” Jonah said. “Satisfying—but I couldn’t wrap my head around the mystery. I was at ease because I didn’t know what the other person looked like, but also concerned for that same reason. It ended, and he left the bathroom before I could even pull up my pants.”

Glory holes are often considered a relic of a different, more shadowy era of homosexual sex. They have a long history, but they declined in popularity as the culture shifted and gay life moved out into the open; in 2018, an Australian museum even added one to its collection for posterity. While online directories suggest that kink communities and other enthusiasts have kept hundreds, and perhaps thousands, of glory holes active around the world, their heyday has passed.

New York City advised residents to “be creative with sexual positions and physical barriers, like walls.”

But in a twist worthy of 2020, glory holes are finding new life in the pandemic, and they have received support from an unlikely corner: public health officials, who have mostly urged people to stay home. In several regions, health departments worried about high-risk hookups during the coronavirus have alluded to—or outright recommended—glory holes as a safer venue for casual sex.

The Canadian B.C. Centre for Disease Control, the New York City Department of Health and Mental Hygiene, and others have recommended, in one way or another, the use of glory holes for sex. In New York, the city’s official COVID-19 safer sex bulletin didn’t mention glory holes directly, but it advised residents to “make it a little kinky” and “be creative with sexual positions and physical barriers, like walls.”

Michael Lanza, a spokesman for the NYC health department, explained that the goal was harm reduction. “The key here is to limit face-to-face contact, as the virus that causes COVID-19 is spread primarily through droplets,” he said. He emphasized that leading a safe sex life is vital to the mental well-being of many people in New York, so the advice was merely practical.

Glory holes do limit potentially dangerous face-to-face contact, but their actual risk is unclear. That depends partly on the environment that houses the glory hole and other factors; for one, researchers have detected the virus in semen but haven’t est ablished if it can be transmitted by seminal fluid. Yet if people are going to continue to have sex with strangers, as public health officials have ample reason to believe, glory holes may be among the safer venues.

Jonah, the man near D.C., told me that with glory holes, he sought to limit the most dangerous acts, like kissing, and removed the need to bring a stranger into his home. If he had the option of inviting a hookup over right now or meeting him for glory hole sex, Jonah would pick the latter “10 times over,” he said.

Other men offered similar stories. One, James, who is in his 40s and lives on the East Coast, decided to use glory holes as a means to have sex but manage risk.

The recently renewed interest in glory holes seems to be widespread, at least according to people who run private stations.

Rich, a gay professional in his mid-50s living in Washington state, has been running a private glory hole out of his home for nearly two decades. Founded after a sting at a local cruising area, his operations have always had a steady flow of patrons. But since the pandemic safer-sex recommendations, he sees the practice growing.

“I’ve been in touch with quite a few others over Twitter that have recently installed glory hole arrangements as a response to the pandemic,” Rich told me over email. “So yes, glory holes are becoming more popular and mainstream, especially with the recommendations from NYC health department, Canada, and others endorsing them.”

At Rich’s station, he said, “business” initially slowed down as the lockdown began, but he’s seen an uptick himself in recent weeks.

If the role of public health agencies in this reemergence seems odd, Lanza, the New York City health spokesman, doesn’t think so. “We are a sex-positive health department,” he said, noting that the city’s guidelines were inspired by manuals for safer sex from the initial AIDS crisis, like How to Have Sex in an Epidemic.“We adapted some of the guidance to fit the current COVID-19 public health emergency.”

Still, some longtime glory hole patrons saw some irony in the moment.

Van, another man who has used glory holes and continues to during the pandemic, first advised potential patrons that all holes aren’t created equal. He usually finds his glory holes through an online directory. Some stations are suited for a good time—well kept, sanitary, and run smoothly, with scheduled appointments and all, like the one Jonah found. Other operators hang a dirty curtain with a hole in it through a doorway inside their apartment, with pets and roommates roaming around nearby. In other words: It’s worth doing your research.

But Van also seemed bemused by the “pandemic-friendly” framing of glory holes. “Clean” and “discreet” sites have always been available, he said, but none of those qualities capture the most appealing aspect of using glory holes. His reason for going: the thrill of ceremony.

“I find something ritualistic about glory holes, which harkens back to the Catholic confessional booth—but at the same time a deliberate thumbing-of-the-nose at religious dogma,” Van told me over email. “It adds to the intensity of the experience for me.”

One of the most proudly illicit and transgressive sex acts recast as a state-sanctioned, guilt-free way to hook up in a pandemic: That’s a perversion worthy of whoever first cut a hole in a wall centuries ago.

This article uses first or anonymized names for several subjects.

Listen to the women of Thirst Aid Kit talk with loop daddy Marc Rebillet about how he quenches thirsts across the internet.