Kim Jong Un has been seen in public for the first time since 11 April, according to North Korean state media.

KCNA reported that the North Korean dictator attended the completion of a fertiliser plant in a region north of Pyongyang, the country’s capital city.

It comes after speculation that Mr Kim, who is obese and a heavy smoker, was gravely ill after surgery last month. 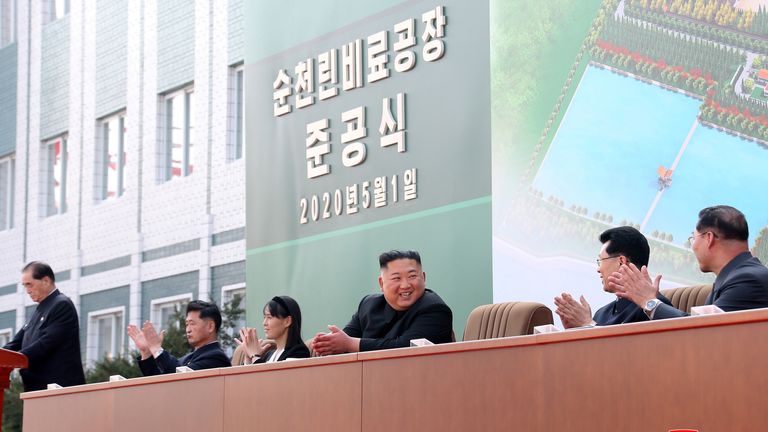 Image:
Mr Kim was at the fertiliser plant with officials and his sister. Pic: KCNA

According to the state media’s report, the 36-year-old had expressed satisfaction about the factory’s production levels, cut a ribbon, and was met with “thunderous cheers of ‘hurrah!'”.

He was with several senior officials, including his younger sister Kim Yo Jong, who is expected to take over if her brother is suddenly unable to rule. 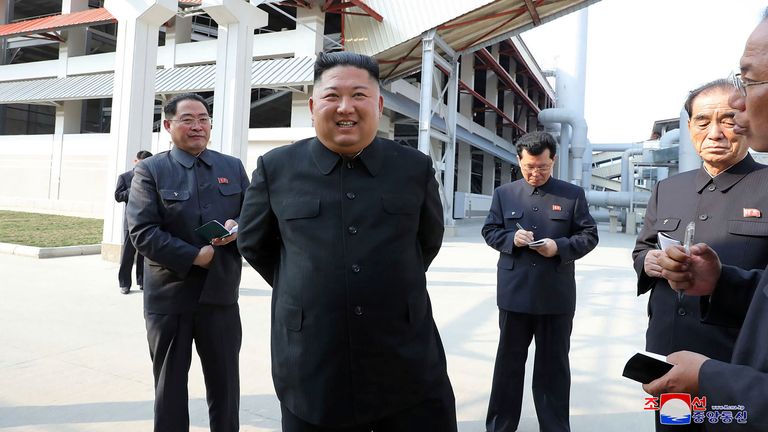 Image:
Kim was surrounded by officials during his visit

In comments reported by South Korean news agency Yonhap, KCNA said: “All the participants broke into thunderous cheers of ‘hurrah!’ extending the greatest glory to the Supreme Leader who has brought about a new change in the development of Juche-based fertiliser industry and

has led the grand revolutionary advance for strengthening self-supporting economy to a victory with his outstanding leadership.”

Juche is the idea of self-reliance. It was also reported that Mr Kim was undertaking official duties in private – sending official notes to the leaders of Syria, Cuba, South Africa, and expressing thanks to workers building tourist facilities in the coastal town of Wonsan.

There were questions about his health after he missed the anniversary of the birth of Kim Il Sung on 15 April.

This is a major holiday in North Korea and he would usually visit the mausoleum where his grandfather lies in state.

Instead, he was absent for the first time since taking power in 2011.

It is not known why he has been absent from public view for so long, but he did a similar thing in 2014 – disappearing for nearly six weeks before reappearing with a cane.

South Korea said at the time that he had been recovering from the removal of a cyst from his ankle.

A Football Career on the Cusp of Glory, Dashed by the Pandemic