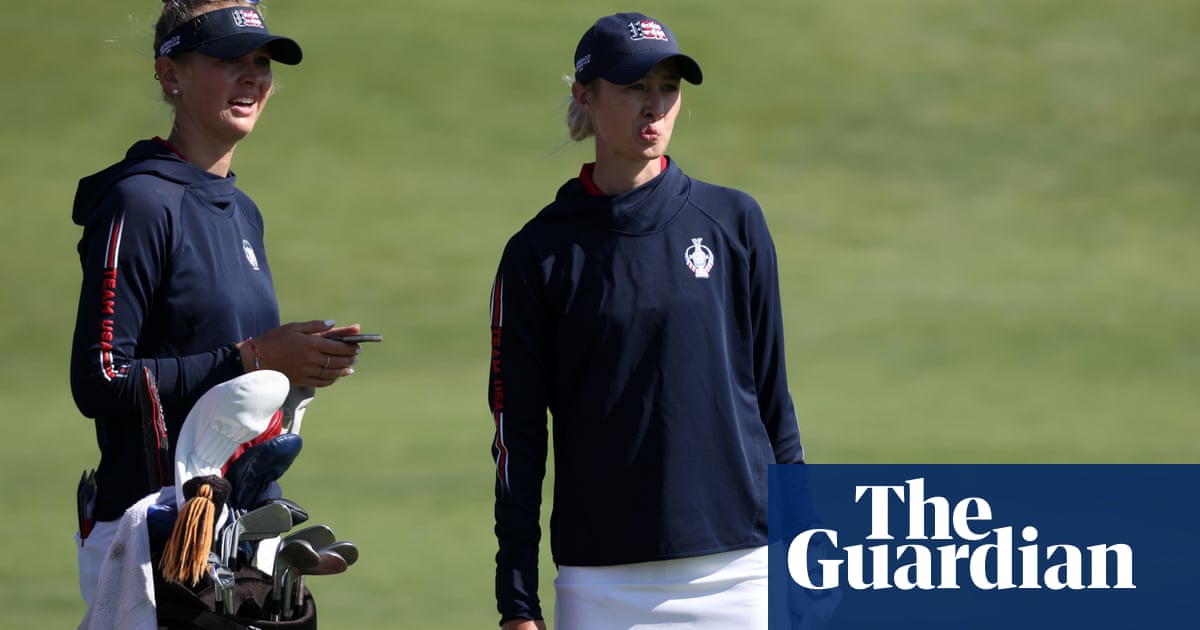 The key to European Solheim Cup success this weekend may lie in halting just one family. In 2019 the Korda sisters proved a sensation in the biennial event. Jessica and Nelly, the first siblings to be paired together in the competition, cantered to victory together in both their foursomes outings before winning their singles matches. The US fell to an agonising defeat at Gleneagles but the Kordas emerged as one of team golf’s most formidable duos. Two years on, Nelly has a major win and Olympic gold medal to her name. Catriona Matthew, Europe’s captain, rather devilishly suggested this may apply pressure to the 23-year-old – a notion that is not publicly accepted.

“There’s definitely a lot of people that try to put it in my head, for sure,” Nelly said. “I’m pretty easy going. I just try to fly under the radar and do my thing, be prepared as best as possible, have fun starting Saturday and hopefully put up some points and just have fun with my teammates.

“We are on home soil, so obviously the crowds are rooting for you. There’s more eyes on Team USA but we are all embracing this. It’s a lot of fun. There’s honestly nothing like a Solheim Cup, the crowds, the energy, the hype that we all have, especially what’s coming Saturday morning.

The sight of Jessica and Nelly as partners during a Thursday morning practice session at the Inverness Club was no surprise. They are almost certain to combine in foursomes once more, with intrigue surrounding whether they may also be partners in the fourballs. “We’re leaving a lot of that up to the captains,” Jessica said. “We are here for the team and whatever way that we can contribute, we’ll obviously do that as best we can. This is a completely different golf course, different team, different year, so we’ll do our best to see what we have and enjoy ourselves while we’re doing it.”

That Nelly competes in the Solheim Cup as the world No 1 is an obvious boost to the competition. For so long, the fact that the women’s golf rankings were dominated by Korean players undermined the value of this clash to some people. Jessica, the world No 18 , is now the fifth-ranked American. “Ultimately we are trying to showcase women’s golf at the highest level and what better opportunity do we have than here?” she asked. “Everything that’s been set up this week is bigger and it’s better so we’re going to try to elevate ourselves to that as well.”

A glimmer of hope for Matthew and the European contingent resonates in the obvious potential for Nelly Korda fatigue. She hinted at that during the Women’s Open at Carnoustie last month and again here in Ohio. “It was [the] Evian [Championship], then it was the Olympics, British [Open] and Solheim, so it’s pretty much like four majors in a row,” Nelly said. “So it’s definitely been a lot of travel. It’s been hectic. But I’ve loved every single minute of it. It’s been a surreal year so far and hopefully we can make it even better this week.”

Sign up to The Recap, our weekly email of editors’ picks.

There has been a familiar face around the US camp. Bubba Watson, the two-time Masters champion, appears to have taken on unofficial vice-captaincy duties for Pat Hurst. “Bubba called a couple of weeks ago just wanting to help women’s golf out,” said Hurst. “He’s got a wife, he’s got a daughter, he loves golf and he just wants to support women’s golf. And so I was all for it. I asked the assistants. They were all for it and it’s been great.

“It’s been a lot of fun having him in the locker room hearing his take on a lot of the things, and a lot of times we have to tell him that, ‘Hey, men and women are a little bit different.’ I think he’s definitely seeing that. His presence is huge.”

It would, however, be a pity if Watson diverts focus away from the real stars of this particular show. See: N and J Korda.

Frink coins a cryptocurrency, but a heartfelt Simpsons mints an unexpectedly satisfying story

How a Rat’s son pieced together two stories of Tobruk