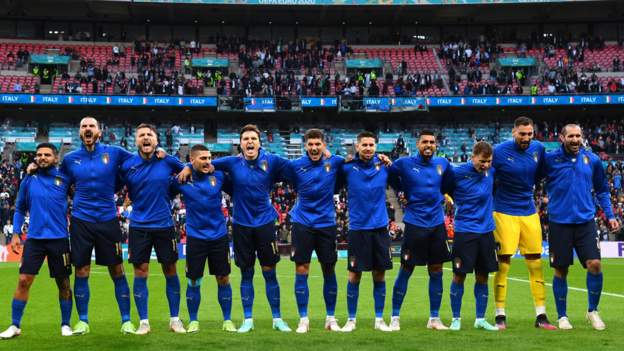 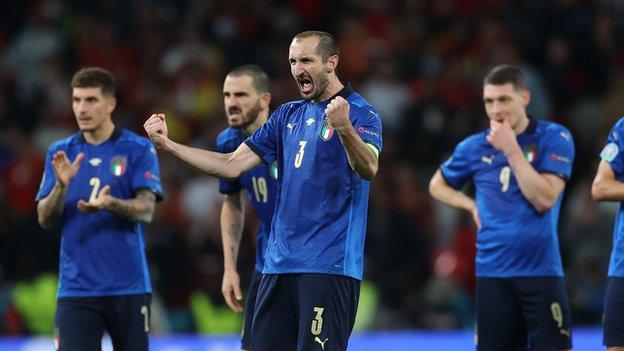 England are one win away from a first major trophy since 1966 but standing in the way of the Three Lions and European glory is a revitalised and vibrant Italy.

While Gareth Southgate’s side enjoyed a successful run in the 2018 World Cup, narrowly losing to Croatia in the semi-finals, this is Italy’s first appearance in a major tournament since the 2016 European Championship.

The World Cup in Russia was the first time Italy had not qualified for a major tournament in 60 years but, since Roberto Mancini took over in 2018, they have gone 33 matches unbeaten and are in the 2020 Euro final.

Here is everything you need to know about key figures in this Italy side. 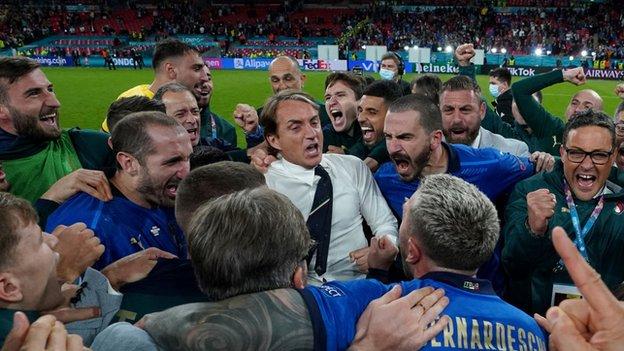 Mancini took charge of Italy in 2018, six months after they failed to qualify for the 2018 World Cup under Gian Piero Ventura.

They have since blossomed and are on a 33-match unbeaten streak dating back to September 2018.

A stylish forward in his playing days – which included four goals in 36 Italy appearances over a decade – the always impeccably-dressed Mancini has become an icon from the touchline.

Italy have won 28, drawn eight and lost only two under the former Man City boss, while also breaking their own international record of going 19 hours without conceding before Austria scored against them in the last 16.

Italian football has traditionally been associated with miserly defending and a reluctance to play expansively, even when a game is won. Until this summer, Italy had never scored more than two goals in a European Championship match, despite winning the competition once and twice finishing as runners-up.

In this tournament, however, adopting Manini’s new adventurous style of play they won their first two games 3-0 against Turkey and Switzerland blowing both teams away with vibrant performances full of attacking intent.

You never have to look too far though for signs of that old Italian art of defending to be in evidence.

Giorgio Chiellini has nailed the art of defending next to Leonardo Bonucci and the 36-year-old skipper brings immense experience to an otherwise youthful Italy squad, after 17 years and 111 caps for Italy.

Hopefully Harry Kane likes hugs and is not psyched out by Chiellini’s calm character filled with humour, smiles and playful punches.

And, while this is undoubtedly a more adventurous Azzurri than previous Italian sides, there have been signs of their old tricks and defensive mastery as the tournament has progressed – very much led by Chiellini.

The Juventus centre-back loves nothing better than defending. His roars and high fives to celebrate a headed clearance or a big tackle have been as evident as his cheerleading role has among the players and supporters.

He played for Italy under-21s in the first official game at the new Wembley 15 years ago – refusing to leave the field after receiving a head wound – and England will know that, to beat the new Italy at Wembley on Sunday, they will have to get past one of the most cunning, determined and finest defenders of the past 20 years.

Former England striker Alan Shearer told the BBC after Italy’s quarter-final win over Belgium: “The Italians had to use all of their know-how and experience in that last 10 or 15 minutes. The two old guys at the back were brilliant.”

Federico and Enrico Chiesa have become the first father and son to score in the European Championship, but where Enrico’s Italy did not get out of the group stage of the 1996 Euros, Federico is looking to go all the way to glory.

At 23, Juventus’ Chiesa has emerged as a nation’s favourite, scoring two goals this tournament so far including a superb curler against Spain in the semi-final, already half of his father’s international goal tally.

Gareth Southgate is more than familiar with Chiesa senior – after clashing with him in Italy’s goalless draw with England in Rome in 1997, which secured World Cup qualification for the Three Lions.

This time around Southgate will have to watch from the touchline unable to make that thunderous tackle that upset Enrico so much and hope that Chiesa doesn’t score against his England on Sunday.

In 2016, Gianluigi Donnarumma became the youngest player to be called up for the Italian national team since 1911 at 17-years-old.

He also became the youngest player to play for the national team after being subbed on for Gianluigi Buffon later that year against France.

Donnarumma had big shoes to fill after 176-cap, World Cup winner Buffon’s retirement, but the 22-year-old has not disappointed since becoming Italy’s number one keeper.

Not only has the Italian keeper conceded just three goals in six matches this tournament, but he paved the way to the final after saving Alvaro Morata’s penalty in the semi-final shootout against Spain.

The Italian has been with AC Milan since he was 14, but Donnarumma is a free agent this summer and, after an impressive 2020 Euro display, he won’t be short of offers with Paris St-German heavily tipped to sign himexternal-link.

How Insigne has defied the odds

Lorenzo Insigne had to prove his small stature did not affect his footballing abilities after being told time after time that he would not get to the top because of his size.

A young Insigne was about to give up on his footballing dream after countless rejections, before finally being given his big chance by Napoli at 15, where he still plays now 15 years later.

Insigne stands at 5ft 3in and luckily for him, due to Covid, mascots are not allowed to walk out with the team anymore saving him from being paired with the tallest mascot and another social media meme…

Though he will not win headers against John Stones and Harry Maguire, Insigne can dance through a defensive line and curl the ball in at the far post without breaking a sweat – as he did against Belgium in the quarter-final.